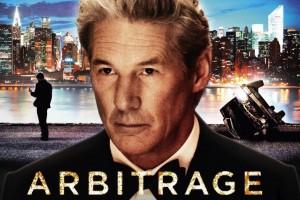 (to the Beastie Boys' tune ) Tellin' all y'all it's Arbitrage!

With a title like that they're going to be turning away teenagers from cinemas in droves, whacking them with sticks and pepper spray-smeared tasers.

I mean, who doesn't get a little wet hearing the silky, seductive word 'arbitrage'? Say it to yourself with a sensuous lilt to your voice, like you're a phone sex worker or telemarketer. From Mumbai, south of the Melbourne where you are from, mister sir.

I like to think that this is the sequel to Pretty Woman, though they couldn't get Julia Roberts to reprise the least convincing role as a prostitute any woman has played in the history of women and movies. Thankfully, they got an actual actress to play the role this time, being Susan Sarandon. But Gere, Richard fucking Gere is the lead.

I have to admit to a certain bias here that colours my ability to appreciate such a film: I'm not much of a fan of Richard Gere, in fact, I find his squinty mole-like eyes and hammy performances gut-wrenchingly difficult to sit through. It's not fair to him, or you, dear reader, but it's more honest this way, more respectful of you. That way you can assess for yourself whether my opinion is based on what I thought of what might be a decent flick, or whether it's just that I can't stand a particular element of it, skewing my perceptions shamefully.

Richard Gere plays a titan of industry, a pillar of the community, just like in Pretty Woman. The names are different to prevent Gary Marshall from suing them, but you know he's playing the same character: A corporate raider who temporarily changed his ways because of the love of a hooker with a heart of gold, but who changed back to his regular ways once he got bored with her.

As the flick starts, this superman hero akin to something out of an Ayn Rand novel is celebrating his sixtieth birthday in both the lap of luxury and within the bosom of his large family. Top of the world, ma. Everything is awesome and he is so, so loved, powerful and wonderful.

Of course, the veneer of familial joy and exemplary achievement swiftly cracks. It's not a surprise that he turns out to be both a shitty husband and a corrupt businessman. The main motivating force in his life, at least initially, is the very keen desire to sell off his company before people and the markets figure out that it's all a house of lies. His darling daughter (Brit Marling), who is savy in business herself and follows doggedly in his footsteps looks at him adoringly as if there was never a single moment in her life where Daddy ever let her down.

He doesn't strike me as the type who made it to dance recitals or nativity plays, or who promised and delivered the ponies every father owes their daughters from birth onwards, and yet here we are, ripe for the first let down in her life.

For, you see, the mistake daddy's grown up little girl made was forgetting, apparently, what a ruthless, dishonest and self-centred bastard her father has always been in order to get to where he has. We of course don't watch any aspects of his rise to power, his time picking up hookers that look like Julia Roberts or Laura San Giacamo on Rodeo Drive in a Lotus, ruthlessly cutting deals where old folk's homes are emptied of their contents in order to drill for orphans and oil, but we can see that in this desperate time, this Wall Street goon will do anything and use anyone to weasel out of his problems.

So, yeah, at first we're meant to hate him because he's a rich bastard, then we resent him because he's a rich people who uses people like they're disposable. Ultimately, are we meant to make the mental leap required to go all Occupy Wall Street and equate all of the wealthy bastards with selfish evil because they only get to become rich if they're fundamentally vicious pricks, or they marry fundamentally vicious pricks, or they are the offspring of etc etc?

It's hard to know. Robert Miller (Gere) is neither a Gordon Gekko clone, nor is he a Patrick Bateman out of American Psycho figure, in that he's neither that charming or that psychopathically entertaining. He's just a smarmy arrogant prick who happily accepts the mantle of being an investment guru knowing full well that he's a fraud, a shameful fraud. Sure, he knows the system, and knows how to play it, but he knows it's all paper empires and architectures of bullshit.

On the eve of some tremendous deal that will save his reputation and keep him out of jail, the thing that risks bringing him undone is something completely separate from his corporate chicanery. It's his little honey on the side (Laetitia Casta), some very mediocre artiste whose only purpose in this flick is to represent a major thorn in Robert's side. When something very bad happens to her, purely by accident, that becomes the seriously shitty situation that Robert desperately tries to find a way to weasel out of.

It's almost hilarious that something he's somewhat responsible for, but which is hardly a serious crime (in my humble legal opinion, which is free, in that it's worthless), is the major catastrophe in his life, not the $400 million fraud that should see him jailed for two hundred years in a cell next to Bernie Madoff. A homicide detective (Tim Roth) smells blood in the water, and seems to have personal animus towards Robert as additional motivation for nailing him for what happened to the artiste (not in that they know each other, but in terms of hating Robert Miller for being one of those people who thinks he can get away with anything because of his massive wealth and Olympian, Mitt Romney-like disdain for the common people).

We, as an audience, become mighty conflicted. Robert Miller is an arsehole, but we know he's not responsible for the crime the cops think he committed (though he committed a bunch of lesser crimes due to leaving the scene of an accident etc). So do we care if he gets pinged for it or not? I'm not sure that I did. Within that conflict is meant to be a tension, the tension of whether he's going to get out of it or not, and whether the poor shmuck he's dragged into his problems to help himself out is going to get sacrificed by the cops in Miller's place. This poor shmuck Jimmy (Nate Parker) tried to help someone out who had looked after him growing up, but it's hard to argue with the detective's contention, under questioning, where he makes the very strong case that he was being used because of his disposability, meaning, in the words of Ali G "Is it because I is black?"

This is competent filmmaking, of sorts, and it's admirably put together, but I have to agree with my beloved partner, who was a bit bored by it, and thought the ending lacked a satisfying resolution. I made the weak case after we watched it, that it was like a particular kind of episode of Law and Order, of a handful of the thousands of episodes released into the wild.

These kinds of episodes would have the erstwhile New York detectives and loyal staff of the District Attorney's office pursuing a very wealthy murderer, whose family could trace their lineage to the Mayflower, on which presumably one of their ancestors totally murderised some unlucky poor person. They would pursue pursue pursue, and then not get their man, or woman, as the case may be. The final verdict, or circumstances would arise which would preclude justice being meted out. These rich bastards would get away with it not to tell the audience that rich bastards should get away with murder, but to remind the audience that they occasionally do because they’re rich bastards. As an audience we were meant to seethe with rage at the unfairness of the system, and our lowly place within it.

It’s hard to know what we were meant to feel about this flick. I think we’re meant to hate the lead but understand where he’s coming from, or sympathise with him or something equally unlikely, but I couldn’t muster much of anything, either during the flick or at its end. There was no-one to really to side with or admire or even hate. Sarandon/Roberts as the aggrieved wife is wasted, the daughter’s only purpose is to look disappointed, and Gere is, well, Gere, and his character is a scumbag but not a particularly interesting scumbag.

Thus I don’t really recommend it, and I’m astounded at the great reviews and acclaim it’s been getting. This is a tv movie if I ever saw one, and about the only interesting part of the flick (regarding police evidence of Jimmy driving through a toll point on the Roosevelt Bridge) is discarded with nothing more said.

Jimmy is the one character that perhaps could rise above being loathsome, since he didn’t really do anything wrong, and is just looking out for himself and his partner. The cops threaten him with jail knowing full well he’s done nothing wrong, in order to get him to flip on the rich bastard. But then he makes that mistake I call the fatal yes, the one that changes us all from decent people into corrupt scum, which is the real reason why the Millers of this world skate through without their comeuppance, and that’s hard to forgive.

I’m very ambivalent about it, but not in the way that you’re ambivalent about a crazy lover with whom you have awesome sex but fear you’re going to wake up one day skinned alive, but ambivalent in a very ‘meh’ way, which doesn’t make for sterling cinema. Do with that what you will, I’m outta here.

6 reasons why Richard Gere’s beady eyes remind me of a small rodent-like animal, kinda like a guinea pig, or a hamster, maybe, out of 10

--
“World events all revolved around five things... M.O.N.E.Y” – sure they do, Mitt Romney, tell us more about your world – Arbitrage.