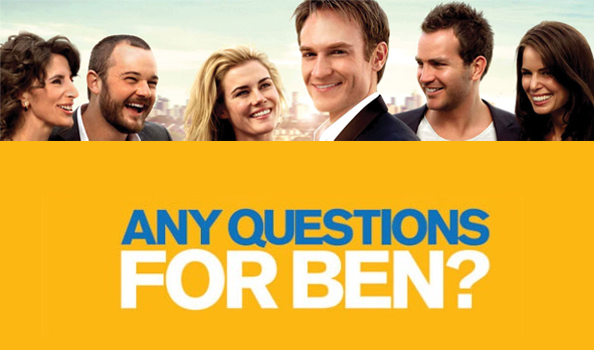 It seemed fairly obvious in the first few minutes that this was a yuppie redemption story, but, forgive me for focussing more on the form or style of the genre, but aren’t yuppie redemption stories meant to redeem the yuppies in question? So the usual character arc involves a) a smug arsehole who’s on top of the world until b) something happens which makes them realise what an arsehole they’ve been, and then they c) set about making amends for their past, so that they can move forward as a better person. And this flick basically supplies us with nothing beyond a).

Ben is a strategic brand manager or logo integrity specialist or some other collection of newspeak buzzwords. He bangs women whose names he can’t remember and has a great collection of friends (three), only two of whom seem like sentient beings. He changes girlfriends, jobs and apartments with disturbing regularity because he doesn’t like feeling bound down. He travels the world with his best mate Andy (Christian Clark) who is so fucking dumb they can never hold a conversation together.

When his high school principal (ably and hilariously played by Rob Sitch, making him an oasis of humour in the desert of his own film) invites him back to school to talk to students about his successful and awesome life, the title of the flick comes to life for us. No-one has any questions for Ben, because the kids either don’t understand what he does or they don’t care. They especially don’t care since the other people on the stage are either sports people, Olympians or people with meaningful lives.

The lack of adulation from teenagers thinking only about updating Facebook and sexting each other causes Ben, who we still loathe up to this point and will be loathing for the rest of the film, to have an existential crisis. At 27 he starts to think “Well, maybe my fabulous wealth and my complete lack of commitment to anyone or human feelings aren’t such great things anymore.”

And from there we're meant to see that he's now on a path, searching for meaning, substance and redemption.

What a short, unfulfilling path it truly is.

The problem for me, actually there are a lot of problems with it, is that Ben's embarrassment over people not fawning over him means he fixates on the person who they did fawn over, being Alex (Rachael Taylor).

Now Alex, in this universe which doesn't really match our own, is a human rights lawyer who works for NGOs generally and in Yemen specifically. Apparently, she's such a sack of wonderful that all the kids are thrilled by the talk she gives and have endless questions for her. Even though the film itself doesn't think what she does is that important since it montages all over her own speech!

Montages, montages, montages. I counted about fifteen. Let me correct myself: I stopped counting after fifteen instances of musical goddamn montage. Also, this long-arse film suffers from a surfeit of establishing shots of Melbourne. After hours of this I ended up yelling "YES, I KNOW IT'S MELBOURNE!!!" at the goddamn screen.

In what universe would high school kids care any more about some bleeding heart UN worker any more than they'd care about a brand manager? I know, it's the universe in which this guy is charismatic and desirable to all ladies everywhere everytime, and the one where he's not a repugnant sociopath only trying to mimic human behaviour in order to fit in.

Instead of actually having a redemption arc, he simply fixates on sleeping with Alex, and if he can manage that, then everything else will magically be better, because then his life will have meaning.

We never find out why sleeping with her would have this magical outcome. I mean, who the fuck needs enlightenment or purpose when you've got a toothy, bony blonde girl to lazily stalk. He doesn't even put that much effort in the stalking, which is doubly disappointing. We also never get a single goddamn reason why she, who's meant to be an intelligent high achiever, would give a good goddamn about an empty space like Ben. Not a single reason, nor a single redeeming feature do they give him.

Ben doesn't do himself any favours by being the most annoying presence I've seen on film since I watched Ben Stiller play the horrifying lead character in Noah Baumbach's film Greenberg. He undercuts every single line of dialogue he tries to deliver with this under-his-breath muttering and self-commentary that completely fucks up any chance of his being taken seriously or of being funny. A lot of characters around him manage to be funny, and they do so effortlessly, stealing every scene they're in with Ben, giving us some thin gruel that allows you to keep going, just barely.

The supporting characters, like Felicity Ward and Daniel Henshall (so chilling in Snowtown, so genial and endearing here) as a living, loving couple who are inexplicably friends with Ben, and John Howard (not that one, the other one) as a priest do excellent work making the film seem like it's not completely set in an unbelievable fictional universe.

Rachael Taylor even outacts the main character, and she's not that great. She was outacted by a goddamn dog in Red Dog, and Josh Lawson is outacted by her here, so in my mental arithmetic, that means this guy isn't even as believable as a magical dog. And she's not that great in the form of this insipid character either. She's watery and without much substance, though since she's nowhere near as annoying as Ben, she seems decent by default. The film makes a fundamental error in making her seem like she's one of the people Ben aspires to be like, and to be liked by, without actually telling us or giving us anything about her that isn't her job, or any reason why Ben needs her so desperately, why she would want Ben, and why we, the audience, should care.

Isn't that the fucking point that the film was trying to make: that we're meant to be more than just what we do, and that if we can combine what we do (that has meaning for ourselves and perhaps for other people) with a life lived for others as well as ourselves that, barring depression or hideous trauma or addiction of some description, we might eventually be achieving the happiness being pursued?

Then how the heck is a horrible person like Ben going to make everything mean something just by imitating the behaviour of others without our being able to understand why such a signpost (getting with Alex) has actual substance to it? Talk about not wanting a couple to get together at the end of a romantic comedy, or whatever the heck this is.

I give up on that aspect, but then I'm also reminded of how irritating I found the over-editing, the constant helicopter shots of Melbourne skyscrapers and the perpetual product placement and Tourism Victoria bullshit and and and...

As well, two hours of this repetitive bullshit? Please, gods, no.

This film was a grave disappointment. I understand they were trying to do, but it doesn't work at all. Maybe with anyone else in the lead, but even then, the thinking behind much of this is so facile that it insults the audience and wastes the talents of those involved.

Pass on by, with extreme prejudice