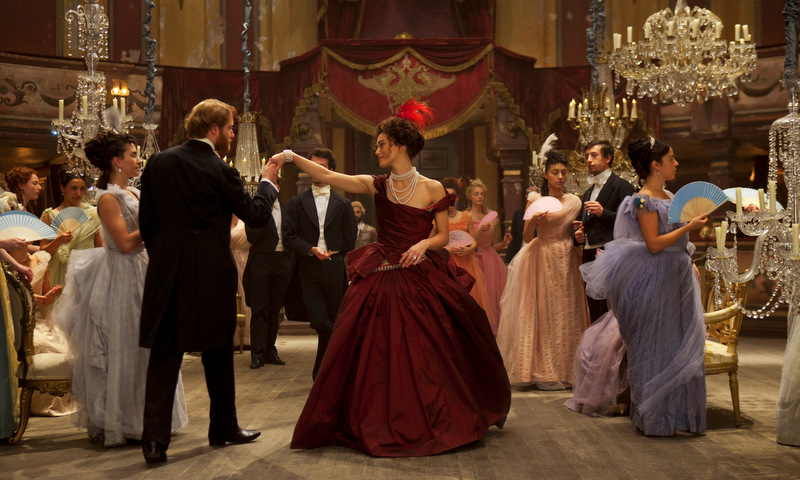 Could you smell my finger, please? There's a dear

There's some virtue to having modest ambitions. When confronted with the prospect of converting Leo Tolstoy's weighty tome into a movie, many have faltered, most have failed, and none have got it right. The book's way too big. It's also on too much of a pedestal for it to come out right to everyone's satisfaction.

Also, where some would obsess with verisimilitude, with period accuracy and historical detail, Joe Wright and the producers here have elected for a way to illuminate the story without having to get dragged into a genuine Russian winter. I mean, it destroyed Napoleon's army, it destroyed the Nazis, so what hope would petty film producers have?

Mother Russia, or at least the time and place of it relevant to this story set before the Revolution, is created for us on a stage. At least, all or most of the story seems to transpire within the confines of a massive old Russian theatre. It's deliberately artificial, as in, they're not trying to hide the fact that it's an inventive and elaborate pantomime. I doubt this approach was budgetary. I mean, I have no idea. Maybe it was cheaper to do it this way, but it doesn't seem likely. Setting up all these elaborate sets on a sound stage so that it looks like it's in on an actual stage is just as expensive as making it look like it's in outer space or in the White House.

The approach has a different aspect of importance, though, beyond the production. Its specific artificiality reminds us that it's artificial on a regular basis. If it doesn't allow us to submerge ourselves into an immersive experience, then it's saying something else, perhaps. The whole world's a stage, and within that stage, between the back stage and the proscenium, in the wings and under the floorboards, are the other people, in this case, the Russian peasantry, perhaps, all the people in the world that don't matter to Anna Karenina, in her singular pursuit of love and passion.

Karenina (played by Keira Knightley, perhaps miscast) is a nice enough woman who is sent out from her home for the purposes of damage control. Her brother Stipa Oblonsky (Matthew McFadyen) is a larger-than-life character with a wife and a bunch of kids and another on the way, and he can't stop fucking around. This being The Olden Days, no-one thinks to ask an aristocrat to stop fucking around. It'd be like ask the rain to stop falling from the sky, or asking snow to not be so cold. Stipa's purpose in bringing his sister to the big city is to get her to convince his wife, and Anna's sister-in-law, to accept her lot in life and stop complaining. I mean, it's not as if his wife Dolly (Kelly McDonald) has any choices. The whole point of the film is that the ladies didn't have any choices except enduring what happened to them, obeying the 'rules' of high society or taking a one-way ticket on the train.

No way could a woman get a divorce and go on living her life in respectable society. So Anna's job is to convince Dolly to accept the inevitable.

It's not like Stipa is a bad man, he's just a jolly, lecherous selfish prick who likes fucking his children's governesses, the maids, random women walking past his house, anything pulsating with life. He is also about the only happy person in the whole film. Almost everyone else is either miserable or destined for miserableness.

Anna Karenina doesn't seem like she's unhappy. She's in a passionless marriage with a man she clearly doesn't love (Jude Law), but she has a son she adores, and she gets to enjoy the various high society entertainments that the landed gentry use to amuse themselves all before the Bolsheviks come along to take everything away.

On her way to convincing Dolly not to be so reasonable, she of course bumps into, and keeps methodically bumping into, a young count called Vronsky (Aaron Taylor-Johnson, horribly miscast). That 'bumping' into each other reaches a fever pitch, perhaps because of the friction, which will consume pretty much everything.

The issue is that even though Karenin (Law) is a compassionate and reasonable man, there are things he cannot countenance. He can't allow himself to be a laughing stock, since he's a senior minister in the government, and it's not a good look. Whether he loves Anna or not is irrelevant. He is always, always, always depicted as a priestly man in his costuming. I also, and I'm not totally sure about this, but I'm pretty sure about this, think the "passionless" marriage part that bugs Anna is solely on her side of things, because whenever he wants to 'enjoy his husbandly rights', he signals his intentions by getting some kind of reusable sheepskin condom out of the wardrobe for immediate use.

Now that's creepy. Anna is completely besotted with Vronsky, but it's hard to see why. The guy they have playing Vronsky looks like a waifish, callow boy. Maybe that was the point, but it doesn't do the flick any favours. It doesn't keep us on Anna's side, either. It also doesn't help her case that we find Karenin so sympathetic.

We can understand, though, the concept of all-consuming passion. Of a love and lust that consumes everything it touches. Of a blinding, fundamental, obliterating desire that doesn't make allowances for anything else; not society's strictures, not the feelings of others, not even the needs of one's children.

And that none of it is a guarantee of happiness. Knightley pouts and flounces her way through a story I can't really buy her in, though I guess she doesn't do that badly. She gets less sympathetic as the story goes on, seeming to be less a product of her time, or even a decent woman caught up in events and societal hypocrisies beyond her control, and more a monstrously vain, insecure and ego-centric woman who can't believe she can't get what she wants all the time.

Anyone who knows the novel knows that there's a B story which is really the A story as far as the author was concerned. Amidst all the turmoil of Anna and Vronsky's lives, there are the noble struggles of Levin (Domhnall Gleeson). He, too, has been adversely affected by that bloody Vronsky. You see, serious man of the earth Levin had his heart set on marrying Kitty (Alicia Vikander), who happens to be Dolly's sister. But she, in the earliest part of the story, has her heart set on Vronsky, and she thinks this shallow player who can't even smoke a cigar convincingly will propose to her because he's flirted with her. So when solid, dependable, redheaded Levin proposes to her, she is unmoved.

Of course, not long after, Vronsky is ill-advisedly bumping his nether regions into Anna's, and Kitty is heartbroken to the point where she thinks she'll just die, like any teenage girl with a crush would. She takes the rest of the film, and Levin spends the rest of the film working up the courage, to figure out that they should be together as man and wife.

Levin's journey, as a symbol of Tolstoy's own beliefs, is that of rejecting the life of high society, distancing himself from the party set of St Petersburg and Moscow in order to work with the other peasants on his country estate. Despite being a noble, he realises that there's more to life than opera and hygiene. He gets down and dirty with the peasants, working in the fields with them, having epiphanies and realising that everything that should be spiritually and personally important to him is the complete opposite of everything that happens to Anna Karenina and Vronsky.

The last part of the film has its inevitability, since even Stone Age tribes discovered in the Amazon just last week know the ending to Anna Karenina without ever hearing of this place called Russia. It's the most famous ending in all of literature, and yet somehow I'm still going to dance around it. It doesn't leave you feeling satisfied, but then neither did I feel even a hint of sadness. It just doesn't pack the emotional wallop that it should, and that's true of any portion of this flick. Emotionally it's inert, but it's a feast for the eyes, no doubt.

The artificial way it’s all realised makes for a lovely production. It doesn’t probably help make it emotionally resonant, because it can be distracting. The problem I had was more with many of the actors who really didn’t convince in their roles. Of the many gorgeous scenes, probably my five favourites were the anachronistic dance number where other dancers froze and started again as Anna and Vronsky spun; the dinner between Stipa and Levin where they can’t see each other over the junk piled on the dinner table; the scene where Karenin, just told by his wife that she’s having another man’s baby, walks out of their ‘bedroom’ to a chair at the edge of a darkened stage, lit only by footlights; the way the horse race is put together on a single stage, and the strange scene of fireworks, where the actors bend backwards to peer up at the sky like marionettes or robots, impossibly backwards.

We’re all just puppets on the stage, the strings pulled by passions beyond our control and a universe that doesn’t make sense. A heart-warming message for the whole family.

--
“Is this about my wife? My wife is beyond approach. She is, after all, my wife.” – circular logic – Anna Karenina