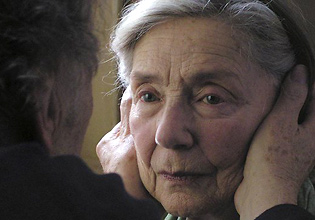 Maybe if I loved you just a little bit more,
then everything would be okay

That guy, what do they call him? Oh yeah, the Grim Reaper.

As if life itself isn’t enough of a reminder of it, this movie reminds us why the Reaper is always preceded by the adjective ‘Grim’.

We live our lives knowing that they will end, but, to function every day, to find meaning in the little things, we have to push that thought and its attendant fear out of our minds. I’m not pretending I came up with the Denial of Death concept, or that I’m Ernest Becker. I wish. Things I’d do with all those royalties.

But we know, we know. Everyone one of us, everyone we know, who we love or hate, all of us go into that great oblivion, and thinking about it too much crushes us.

So we watch a film about two seniors, Anne (Emmanuelle Riva) and Georges (Jean-Louis Trintignant), people who’ve lived fulfilling and meaningful lives together, who’ve aged the way we all do, who still, somehow, thought the ‘end’, whatever form that would take, would somehow skip over them, at least for a while longer.

But ‘this’ is ‘it’. To be betrayed by one’s body despite not having done anything ‘wrong’. It is to be helpless in the face of mortality, like we all are, but still feel the inherent unfairness of it, because it’s always going to feel unfair.

Death is not unknown to me. People have died around me, through illness, through suicide, through old age. My parents, though, still live, thankfully, blessedly. They are the age of the two main characters here, and it was impossible to see the flick without thinking of them, and without thinking about their inevitable decline into helplessness and death, and how much I dread that for them.

Anne and Georges are upper-middle-class Parisians, both lovers of and experts in the field of music, both of an age that implies they’ve been together 50 or 60 years. They attend concerts and live their fussy lives in the way we’d all aspire to at their age. When they come back from the piano concerto of one of Anne’s protégés, the door to their apartment has been crudely jimmied open with a screwdriver. Their world has been rudely invaded, even though nothing’s been taken (yet).

But the ‘invader’ is already inside. Next morning, during breakfast, Anne has a strange moment of unresponsiveness, scaring Georges. He’s not sure what’s happened, or what to do, but we know, for a number of reasons, that it’s not going to be good.

Turns out it was a stroke. A mild stroke, but it reveals a more potentially serious problem, which gets operated on, with disastrous results.

What else can we do in the face of the person we share our life with becoming helpless? We look after them as best we can. But what do you do when you yourself are fairly aged and can barely look after yourself? You do the best you can to look after both of you. After all, why else would this film be called Amour?

This is a film which contains a specific circumstance, but it’s lived by millions of people, has been and will be ever more. The details and the ‘intruder’, the aspect of mortality that invades our lives and takes us down, but not before reducing us in every way possible, differ from what’s experienced by Anne and Georges, but all the same, we all know this story.

It’s the depiction of it that is most confronting, even though it’s not gilded in any way or minimised, downplayed. This film isn’t a story about a couple to whom ‘stuff’ or a plot happens and someone dies at the end: it’s about the journey towards that death, and the impact on the people who are experiencing it, being, in this case, a loving old couple.

It’s called Love, it’s called Amour, but it’s even, for much of it, about how little that love compensates or alleviates what they go through. Sure, love all you want, love as much as you can, but the horror of what Anne endures isn’t made that much easier even with the tender ministrations of Georges, or his loving ways.

Quite believably, she resents having to rely upon him for everything, from feeding to bathing to bathroom trips to even minimally getting around. She blames him for convincing her to go to hospital in the first place, and when she says “don’t blame yourself for what happened”, she clearly does. The way she said it gutted me, because it’s all in her tone, not her words. He reasonably urged her to get surgery to prevent something more terrible from happening to her, and it ended up causing what they feared most. It’s not as if he performed the surgery himself.

She uses this moment, this difficult moment, to extract a terrible promise from Georges: no matter what, don’t take me back to hospital, don’t put me in care. She even then, lifts his spirits further by telling him how little she wants to be alive in her current state.

What’s a loving husband to do?

The performances are exemplary, but then, just to sound like I’m minimising their contribution, Jean-Louis Trintignant and Emmanuelle Riva are hallowed veterans of French cinema, and they’re quite old themselves. The worst thing I was thinking about for them both is that here they ‘acted’ a story which they themselves will probably live through in the next decade or so.

It’s so unfair. Why can’t they get a pass? Why can’t any of us get a pass from this utter cruelty, from this Death that mocks us for months and years, taking away our strength, our mobility, our ability to communicate, our memories and finally our selves before ending us? Having had two dear friends go through this experience with their father quite recently, where Death ended up being a blessed relief for all concerned after years of suffering and dementia, it just seems to mock us all, to mock all our efforts towards living at all.

I’m making it sound like a depressing experience, like a brutal, devastating two hours, but it isn’t, entirely. It’s incredibly sad. The problem (it isn’t really a problem at all) is that Michael Haneke, known for the ‘cruelty’ of his films, films all of this with his trademarked pitiless gaze.

The camera (well, I guess it was cinematographer Darius Khondji) films these poor people in their lovely apartment with an eye that does not blink, with an unwavering focus that never dissembles, which doesn’t allow for illusions or fakery. This is it, it says, this is happening no matter how much you don’t want it to, and we have no respite the way the central couple have no respite from it either.

Speaking of pitiless, Isabelle Huppert plays their daughter Eva, and anyone who’s seen Huppert in any film ever knows she’s not going to swoop in and make everything better. There isn’t an actress in this world more comfortable with playing unsympathetic characters than her, with the possible exception of Tilda Swinton. That her character here is self-absorbed and unsympathetic comes as no surprise, but I think she’s believable at every stage along the way, and we weren’t expecting her to be some angel of mercy who makes everything all right, because that doesn’t belong in this film. Minimising what Eva goes through does her and the film a disservice.

Georges’s dream, or nightmare, more accurately, also had a creepy effect on me. He dreams of hearing the doorbell, and ventures out trying to find out what’s going on, and we get to see a depiction of his mental state, or at least his subconscious mind. He’s not a hero for looking after his wife, he’s just a guy, trying to do the best he can in a situation that grows more and more untenable, and so his actions at the end, which we know of from the beginning, are as understandable as they are devastating.

It’s hard to say that something like this is a great film (it is, but it feels like I shouldn’t say it). It’s perfectly constructed, the way everything Haneke does is perfectly constructed, and that could make it feel like a cold experiment. It didn’t feel like that for me, because I was so absorbed by their story, and so ground down by it by the end. It was impossible for me not to think of my beloved parents, or my partner’s beloved parents, and our various friends and relatives, and how something like this awaits all of them, and us, and one day, our kids. If we’re ‘lucky’, that is, and get to live to ripe old ages, and they get to live to ripe old ages.

And I don’t want to be reminded of that fact, okay? I don’t want to be reminded that my extreme love for all these people isn’t going to ease their suffering, or make everything okay, or save them from similar fates (I’m not referring to what happens at the end of the film, just the inevitable decline which I dread and which will come if our ‘end’ isn’t brief and accidental).

I want the illusion, Mr Haneke, you Austrian sadist. I want to delude myself for as long as possible that we are all infinite, that my love can keep everyone I love safe and well, and that we’re all going to live joyous, fulfilled and forever. Why did you have to force me to confront the fact that there will be no happy ending for any of us, you bastard?

--
“Things will go on, and then one day it will all be over.” – if only things were that simple - Amour