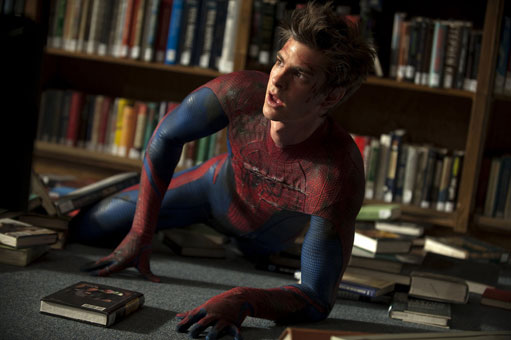 He's not the webslinger, he's just a very annoying boy

It’s getting to be like we’re watching these comic-book superhero flicks out of a sense of duty, rather than desire. Once The Dark Knight Rises opens next week, I don’t want to see a superhero flick for at least a couple of years. Surely, by this stage of the American summer, and the winter of our dissing content, we’re superheroed out for the year?

The Amazing Spider-Man surely was an exciting prospect to someone, everyone, a couple of people. A reboot of a recent series that did pretty well at the box office, of a familiar and almost kid-friendly property that’s recognisable the world over? But of course! But they didn’t want Sam Raimi at the helm, Tobey Maguire as Peter Parker, and they did want it in 3D, and perhaps that’s what we wanted too, deep in our heart of hearts and pants.

People at Marvel / Fox: sure, Spider-Man 3 wasn’t that great, but our problem with it wasn’t Sam Raimi, or Tobey, really. It was the overstuffed plot, the crappy nature and number of villains and, for some people, the bit where Peter Parker becomes a strutting domestic abuser. I still liked bits of it, and I had a few laughs.

We like Raimi. We want Raimi. We need Raimi. Marc Webb, you’re probably a lovely guy, but you sir, are no Sam Raimi. You’re not even Ted Raimi.

And, as the new lead, the new head of the franchise, I’m sorry, Andrew Garfield, you’re not really right for the part. I thought you were, because I’ve liked you so much in almost everything I’ve seen you in, from The Social Network to Never Let Me Go, but you’re not aces as Peter Parker or as Spider-Man. Not a good fit, or the direction was lacking, whichever.

And Emma Stone as the love interest Gwen Stacy? You’re wonderful in lots of other films, so at least you have that to console you on those cold winter nights. That and truckloads of money. Generally, you’re able to transcend a lot of the generic stuff they give you in movies, with your natural charm and girlish ways, but this time I don’t think transcendence was an option. The material smothered everything that had the potential to be interesting, or the direction did, whichever.

The villain here, too, is a pretty uninteresting one, being The Lizard, or Curt Connors, as played by Rhys Ifans. It looks fine for the CGI fights, I guess, but he’s a pretty dull foil for Spidey, who goes from wanting to repair the physical handicap of an amputated arm through Science!, to wanting to kill everyone or turn them into mutants for no discernible entertaining reason.

Since Cliff Robertson is dead, I guess he didn’t want to play Uncle Ben again, so they got the next best thing, being Martin Sheen. And Aunt May, previously as much a part of the films as any other character, is replaced by a shiny Sally Fields, who never gets that querulous ‘I believe there’s a hero inside all of us’ voice that Rosemary Harris did so, so well.

On some levels it seems weird that they felt the need to redo the origin story again, since the first Spider-Man flick came out 10 years ago, and Spider-Man 3 was only a few years ago. So they devote about 45 minutes to the “I got bitten by a genetically modified spider, and all I got was this lousy set of superpowers” stuff, as Peter gets used to having powers not found in nature or our temporal reality.

They also spend a lot of time giving us the motivation for the character, a guy in tight spandex who fights evildoers. The motivation is the same motivation as the earlier films, and pretty much any film (Uncle Ben, come back! Don't die just to teach me a lesson!), so perhaps we didn't need every aspect of the origin story all over again. It's all so familiar that it's hard to muster feelings either for or against it.

But they had to do everything, and none of it is really that convincing. Convincing in the sense that we learned anything new, or that they're taking it in a direction beyond the commonplace. They can't really do it, though, because the whole production is a very safe, very risk-averse, very common-place experience.

That doesn't make it bad, though. This isn't a sub-standard film. It looks pretty great, and the most integral part of the property is what Spider-Man looks like slinging webs across New York. They manage to give a great sense of the physics of it, just swinging around like a body with abilities but with solid mass, too. The second-most affecting bit of the flick is where Spider-Man is wounded, and is struggling to get where he needs to get in order to stop the bad guy. Implausibly, but still enjoyable to watch, some of the hard-working blue collar salt of the earth of New York figure out a way to help him out.

It's a good moment. The only moment more significant is an earlier one when he makes the move from vigilante to hero, when he realises he should be using his powers to save children, instead of using them to shoplift, sell drugs and avoid paying public transport fines.

I assume that's what he was using them for, because I didn't actually see that happen, because I might have faded out for a few moments. Andrew Garfield, who's a lovely enough actor, isn't really convincing to me in either his Peter Parker guise or as Spider-Man. Of course, when he's Spidey, it's mostly CGI or a stunt guy in a mask, so that bit's a bit easier to accept. But as Peter, despite the fact that he's a 28-year-old man, for some reason he's just not that convincing as a seventeen-year-old nerdy put-upon boy. I'm not sure why. There's not a lot of distance to travel for him when he's supposed to be going from a well-meaning nebbishy nerd to a powerful, confident superstud superhero. He's a cocky arsehole at the beginning and at the end as well. That's barely a short walk around the block.

His scenes with Gwen Stacy are pretty painful, I have to say. I didn't particularly weep with joy with Tobey and Kirsten Dunst onscreen as the greatest, most romantic-est couple since Vivian Leigh and Clark Gable, but these two act like caffeinated spastic puppies in their attempts to be cutesy. I hate to say this, but one or two of those scenes made me want to punch puppies in the face.

It's the only way they'll learn. Does anyone else come out of this okay? Well, I guess Denis Leary does all right as the chief of police who's a hardass and who hates Spider-Man. He's no J. Jonah Jameson, though, and, as such, he's not that much of an antagonist for Spidey.

Mentioning J. Jonah Jameson reminds me of the fact that there's a depressing absence of humour throughout the flick, at least, there wasn't much I found that funny. As such, the lack of humour, and the lack of the right tone rendered much of what happened too generic an experience to stand out, except in some of the actions scenes, but especially at the end where it felt like this could have been any superhero character fighting any supervillain menace, and I started flashing back to Green Lantern. And that's something no-one else wants, especially the people who made Green Lantern.

Is it worthless? Not at all. I felt the rush sometimes, the joy of movement that Spidey can achieve, and the dynamics of Spidey's actions looked very right, giving me the action aspect that I would have hoped for. The rest of the dramatic stuff fell significantly by the wayside by being so cliched, and so reheated.

Maybe with the obligatories out of the way, they can just concentrate on coming up with a new adventure that's not precisely the same as the shit served up four times before.

Then again, the very definition of insanity is doing the same thing again and again and expecting a different result, so expecting them to do any different is bonkers, probably.

5 times I'm not going to start the 'Get Sam Raimi back!' campaign just yet, but someone should out of 10

--
"Thirty-eight of New York's finest, versus one guy in a unitard." - may the odds be never in your favour - The Amazing Spider-Man