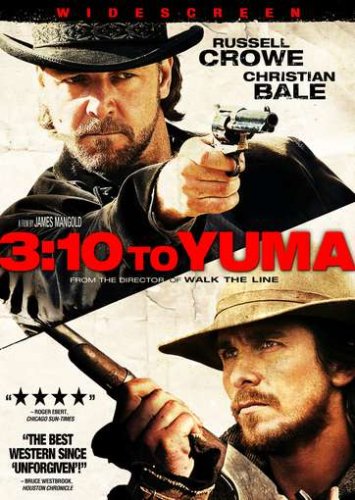 Well, maybe not. There aren’t many occasions where I would have thought Christian Bale would be out-acted by Russell Crowe, but it happens here. The problem is that it’s too easy for Crowe to play the Ben Wade character, and he does so with a comfortable mixture of menace and panache. Bale just plays the noble role with such stolid dullness that I swear he was sleepwalking through many of his scenes.

I’m being a bit unfair. I enjoyed the flick a whole hell of a lot, because I likes the westerns, I does, and Bale wasn’t that bad because he can’t give bad performances. He’s just incapable of it. But I think it would have been more of a challenge, and would have forced the actors to stretch a bit more rather than coast through the flick if they’d swapped the roles around.

In other words, it would be harder for Crowe to be convincing as a noble, downtrodden rancher than as a charismatic outlaw. And likewise Bale would have had to work a bit harder to play Ben Wade with the requisite amount of charisma and lethality.

The landscapes are all westerny, the shootouts are all what you expect, and the dynamic betwixt the two does develop organically over the course of their travails. But what doesn’t make as much sense here is why Wade does not, shall we say, take advantage of his opportunities, despite the occasions where we see him kill without hesitation or remorse. Especially since the flick makes no bones about the fact that he can be, on occasion, a sadistic killer.

But then there’s his seductive side, which he uses easily whether it’s trying to seduce a lonely saloon owner or when he’s trying to get Dan or his girly son to come around to his way of thinking.

Dan comes across as more desperate that noble in his intentions, but over the course of the flick the intention to get Wade on that train no matter the cost seems more driven by a determination to keep his word rather than any practical, financial or sane motivation. Which is fine when the flick is made in 1957. I’m not sure the character’s sheer wonderfulness shines through as clearly when the flick comes out in 2007.

Dan is also missing a leg, which makes it all the more implausible when he gets up to many of the physical shenanigans that he does. And it goes further towards his murky motivation, in that his absolute determination To Do The Right Thing doesn’t really make sense at the very end.

As for Ben Wade’s motivations and actions towards the end, well, that is a source of much controversy amongst both fans and detractors of the original. Let’s just say that from my point of view, I can understand the way that Wade’s loyalty shifts out of respect for Dan and his solid, pioneer values. And I can even understand the crucial change of heart required to make the ending ‘work’. But it does stink of being fairly ridiculous. Especially when Ben and Dan are jumping across rooftops and shooting at all and sundry.

Hello, one-legged man? I’m sure he had plenty of carbon-fibre prosthetics available in the 1880s.

One of Wade’s ultra-loyal gang is Charlie Prince (Ben Foster), whose absolute determination to free his boss is almost matched by Dan’s determination to get to the train on time. The real difference is, if I were a betting man, and I certainly am, as my lifetime ban from the Crown Casino attests to, I would put my money on the kill-crazy psychopath getting his way rather than the humble rancher.

Foster is, as always, capable of playing genuinely interesting mad characters. Here he plays Prince with an almost Southern aristocratic disdain, and with no hesitation when it comes to meeting out his own twisted vision of lead-based outlaw justice. But it’s a dialled-down villain, unlike the over the top stuff he usually gets to do, and is just as enjoyable for it.

It shifts between closely following the original and creating completely new stuff seemingly just for the sake of it. Gone too is the fascination for the Other that the original has, in that here Wade may be somewhat fascinated by Dan’s nature, but it doesn’t seem as reciprocal as the dynamic Van Heflin and Glenn Ford managed in the original. Also, the ending varies in one significant detail in the remake that seems unearned considering the differences in what Wade does. After all, we do see Wade murder a guy in his sleep with a fork, which doesn’t play in the original, and thus doesn’t rankle as much when the outlaw goes to his ultimate fate. Whatever that fate may be.

It wasn’t hard to see Dan in the original as a genuine noble type. It’s a bit harder here, and it’s also harder to see why Wade goes along with Dan’s plan, considering that it seems prompted by an utterly stupid speech about shame that Dan makes whilst being choked to death.

But I still liked it. For me, this is one of those films that I enjoy more the less I think about it, which is what people usually say about big budget action flicks and any flick starring women with cup sizes above a C or more than two explosions. I can appreciate 3:10 to Yuma and its gentle praise for family values and Doing The Right Thing if I just don’t think about it too much.

But it’s so hard. I think too much about everything. I can’t help it, it’s a curse.

Still, I’d relegate this flick solely to the status of “for western fans only, and, only for ones that aren’t too critical.” And who have a middle finger just a tiny bit shorter than their index finger. And who once owned a goldfish called Tinkerbell.

But the rest can go hang.