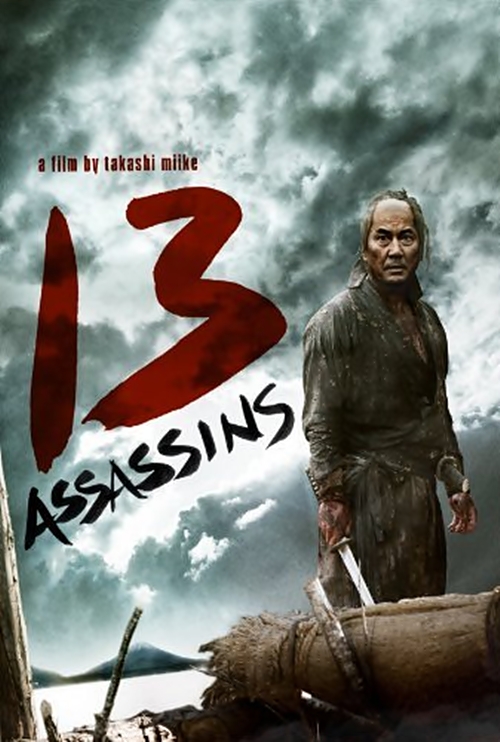 Whenever I hear that Takashi Miike has a new film out, I wonder out loud to myself, especially when I’m on public transport, “Well, what new piece of fucked-upedness has he come up with now?” I mean, after all, this is the demented Japanese director responsible for, in a criminal sense, films like Audition, Ichi the Killer, the yakuza Dead or Alive trilogy, Visitor Q and a whole host of other flicks so vicious I don’t even want to quote scenes from them, because it’s too traumatic to remember.

Suffice to say, there’s never, apparently, been a moment where he’s thought of depicting something on screen that is vile, horrifying, obscene or demented and thought, “Nah, that’s too fucked up, even for me.”

Whatever depravity he’s previously been responsible for, he still remains a completely flexible director with the ability to make any kind of Japanese flick in any kind of Japanese genre, which, to use an overused phrase, ranges from the sublime to the truly, hideously ridiculous.

Instead of spending time talking about the truly horrifying and nightmare-inducing stuff I’ve seen in all his other films, which is tempting in the extreme, I’ll just talk about this film, which is surprisingly solid.

I say ‘surprisingly’, because it surprises me how straight Miike plays it. It’s the kind of straight-ahead samurai flick that I’d expect more from directors like Yoji Yamada and Hiroshi Inagaki instead.

Yes, household names, I’m sure, but at the very least they’re old-school guys who made old-school (though, in Yamada’s case, certainly revisionist) samurai flicks.

But death is inextricably linked to these flicks even more than the usual war flick. The entire social order depended up shame and death, for which the overwhelming two rules of this particular cultural Fight Club being “die at the soonest opportunity for your clan” and “die at the slightest provocation for your clan”.

And yes, as I’ve said in the past, it’s almost absurdly comical to see the lengths samurai go to in order to hold up their or someone else’s honour by killing themselves at the slightest faux pas or stubbed toe or sneeze out of order.

The difference in this story is, well, sure a bunch of samurai want to die, and they want to take a bunch of people out with them, but they want to do it for a good goddamn reason. And if they don’t die, well, that’d be sweet too.

The particular set-up here, which allegedly has roots in history, is that there’s this particular guy called Naritsugu (Goro Inagaki), who’s half-brother to the Shogun in the 1830s. And he’s really, really bad. A bunch of guys, about, I dunno, 13 or so of them, band together to take him down. All the way down. They’re not The Seven Samurai, they’re not The Forty-Seven Ronin, they’re The 13, uh, Assassins.

To probably quote a rapper, probably a lesser light from the Wu Tang Clan with a small interest in Japanese history, but scant respect for it, the samurai in this era ain’t worth shit anymore. It’s the waning days of the Tokugawa Shogunate. Firearms have made samurai less than worthless. The Meiji Restoration, which will abolish the old feudal system, is just around the corner, and means they’re on the endangered but not yet extinct list. And plus, there’s been an unfortunately long period of peace, meaning they don’t even have the chance to die in battle like decent Klingons should.

The vile actions of Naritsugu, which are beyond the pale, including mutilating, raping and killing other members of royalty at will (presumably it would have been okay to do it to them if they’d been peasants), are so horrifying that other members of his own clan decide this nutter can’t be allowed to live any longer, lest he plunge the realm into blood and gore.

We are left with no doubt as to the magnitude or accuracy of his awfulness, since we see him commit many of his crimes in person. And as he commits them, he speaks in the bored words of an aristocrat, who nonetheless seeks to lecture those around him on sound conservative feudal principles as he murders children.

Actually, having remembered and written that bit down, I guess it’s prime Takashi Miike territory. Oh, also, there’s the (thankfully) CGI image of one of his living victims, left alive to chase away any doubts the protagonists and the viewers might have has as to whether Naritsugu Must Die or not.

A senior official asks a respected samurai called Shinzaemon (Koji Yakusho) with the doing of the dread deed. It isn’t something easy to be achieved. It’s not a matter of just walking up to the guy and bonking him on the head. Naritsugu is already paranoid, defensive and, well, fucking crazy, but he’s also surrounded by at least seventy samurai. How is Shinzaemon going to carry out his sacred duty?

The slight difference here, which actually makes a tremendous difference, is that these chaps aren’t striding around grunting about how they have to die to regain their honour, or for someone else’s honour, or for the heck of it. They’re tired of being samurai, they’re tired of the bullshit the system of adherence to duty forces their lives to be, and they really do want to achieve an honourable goal which will probably require them to sacrifice their lives in its achievement.

One of the men he enlists is his nephew Shinrokuro (Takayuki Yamada), who’s virtually given up being a samurai anyway, seeing as he’s shacked up with some delectable strumpet, and is gambling and drinking his life away. His uncle gives him something to risk his life for in order to make it seem like something more worthwhile.

All the chaps have their own stories, but, let’s face it, when it comes down to the incredible final hour of action, as 13 guys, one of them perhaps not even human, take on 200 enemies and one effete psychopath, all the interesting and compelling questions about motivations, morality and flower arranging fly out the fucking window as 13 Assassins delivers one of the most solidly entertaining action hours that I’ve seen in a very long time.

Is it starting to sound a bit reminiscent of that Zack Snyder flick 300? Bullshit. Snyder’s not worthy of licking the filth from Takashi Miike’s sneakers.

It’s tremendous. I don’t know if it’s remotely plausible, but they do make it believable, thrilling and tense, and it rocks like a goddamn hurricane and earthquake rolled into one. Perhaps earthquake is a bad term to be using right about now, and perhaps for the next twenty years with what happened at Fukushima and all…

Well, I never promised you a rose garden. Shinzaemon and his merry men take these guys on in a village they’ve set up as an incredible death trap, and they make it more exciting than all the Iron Captain Thor Transformer Lantern brawls you could care to mention or could splice together in an abomination of editing and ham acting.

I had a ball watching this flick. I enjoyed what it had to say about the loathsome feudalism of the era, I admired almost all the choices the filmmakers and script made, and I howled at the truly villainous villain, so desperately was I longing for his comeuppance. Shinzaemon is a great character, and the counterpoint or primary antagonist for him is not the despicable lord, but his main adviser Hanbei (Masachika Ichimura), with whom he shares an education and a tremendous competitive streak. They’re not fighting and chess-playing against each other over the lord: they’re doing it because they’ve been waiting a lifetime to find out who’s the better man.

It’s a keeper of a flick. I look forward to seeing it again, I enjoyed it that much. In this era when too many flicks are coming out to keep up with, it’s rare for me to want to go out and see a flick a second time. Having watched the flick at the Melbourne Film Festival just recently, I would enjoy again, I think, the chance to see it on the big screen a second time. I doubt I’ll get the chance, but hey, we can all dream.

For once it felt like I got to unambiguously enjoy the heck out of a samurai flick without having to feel like I’m supposed to approve of the fascist and nihilistic subtext, all whilst delivering a splendid symphony of carnage and violence. And that’s all I could ever ask for in a film

--
“Of all the days of my life, this has been the most exciting” – thankfully, it’ll be the last one as well – 13 Assassins.