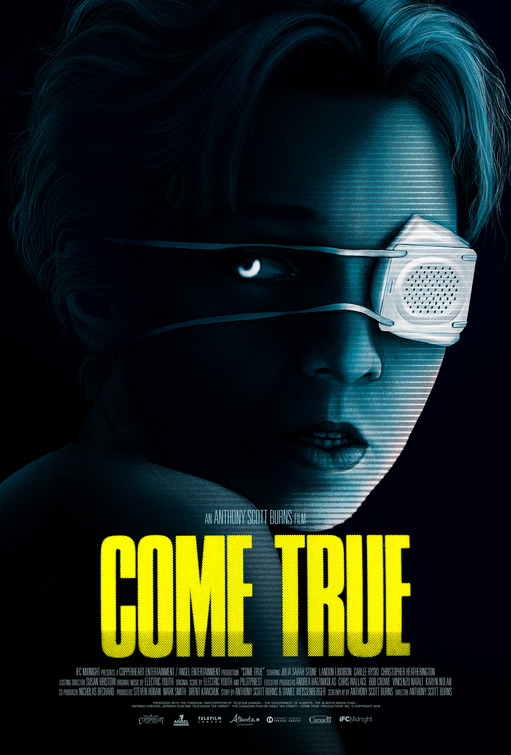 I assure you, the movie is better than the poster would indicate

Up until a certain point. Then it pulls a M. Night Shyamalan, and makes you regret ever having heard of the film in the first place.

It’s not even really a twist so much as an explanation, that comes out of nowhere, that no-one asked for, that improves nothing, that instead makes you feel like you’ve wasted your entire time watching something that has such an appalling ending.

I don’t want to focus on that. I want to focus on what I feel the flick gets right, for most of it length, because that way it feels like I’m being fairer to the film, to the people involved.

Saying that this film, Come True has a nightmarish quality is kind of like describing Kafka’s The Trial as being Kafkaesque. It’s redundant phrasing, because it’s literally about nightmares.

A lot of the flick is passages of a camera swooping through monochrome landscapes and sets with imagery that disturbing, but you can’t quite put your finger on why. It’s not gory or violent (except for maybe a few seconds just before the ending), and there’s no monsters eating people or demons trying to tear people’s bodies or souls apart.

It’s about a person, Sarah (Julia Sarah Stone), who’s homeless, and she doesn’t sleep very well. When she does, she always seems to be approaching a motionless figure, someone who she feels she is terrified of, but doesn’t know why.

We don’t know why Sarah avoids her mother, or doesn’t feel safe at home. She tries to scrounge food, take showers where she can, get to school on time, but she’s always falling asleep during class. When she sees one of those tear-off fliers for a place, presumably a university, offering to pay people in order to conduct sleep studies on them, she thinks that maybe this will help her out and she’ll get some money for her troubles.

Two birds, one stone. The people running the study are friendly enough, but they have a weird boss Dr Meyer (Christopher Hetherington), with these massive glasses on his face, which are even more disturbing than anything else that happens in the flick. Also, they don’t answer many questions when asked.

Why so mysterious, eh? The participants in the study are mostly older than Sarah, and have done numerous studies at this place, so maybe that’s reassuring to Sarah. They have to wear these weird upholstered fabric suits, and are hooked up to all these machines.

It’s set contemporarily (people have smart phones), but something strange is going on, from an aesthetic perspective. There’s a lot of 1980s imagery, and that’s not just the fact that there are a suspicious number of Weekend at Bernie’s or The Terminator posters in places they have no right being. The technology has a certain look to it, too. The computers may be able to do something incredible, which is, the power to look into the mind of a dreamer and record what they’re seeing, but it deliberately looks like old medical tech, rather than futuristic stuff.

And the soundtrack is all this kind of synth heavy stuff that means the music makers have definitely listened to a lot of Tangerine Dream, or at least a lot of the Stranger Things soundtrack, which is the next best thing.

The dream sequences are not, I don’t think, computer generated images, on the most part. There’s a physical, tangible quality to a lot of it that makes me think a lot of it is art design rather that digitally designed, though I might be wrong. I cannot tell you how frightening a lot of that imagery is, how viscerally disturbing, even when nothing is happening.

The logic employed in these sequences is what is often called dream logic, but whenever people use that phrase I always think “but there’s nothing logical about dreams at all”, to which they would probably say “exactly”. We don’t remember how we got from point A to point Pangolin in a dream, we just feel that we did.

What does the figure want, the one with the white eyes?

Well, did they ever bother to even ask them? Would have been the polite thing to do.

The doctor with the massive glasses, amazed at the “data” they’ve been getting from this round of guinea pigs, speaks of a reoccurring, primal figure, one which now seems to be appearing in everyone’s dreams, and which people have spoken of in the past, seems to be getting closer to something, or someone.

Or maybe they’re trying to get through, from the dream realm, or the realm of the subconscious, into this, the so-called real world?

Even though the images themselves are low resolution, and aren’t that inherently scary, when an image of the shadowy figure is shown to Sarah, she either passes out or has an anxiety attack so bad it looks like an epileptic fit.

To make matters worse it seems like one of the grad students or whoever they are working for the Doctor is following Sarah around. She’s in a second hand bookshop, and he’s recommending Philip K Dick books to her.

Immediate red flag there. Great science fiction from a paranoid schizophrenic, but really, he’s just recommending Dick to her, which is very creepy.

And she thinks it is so too, and yells some very convincing, very accurate sounding insults as to what did he think would happen?

That’s before, of course, she and this jerk nicknamed Riff (Landon Liboiron) become friends, share stories about dealing with nightmares and such.

He’s the one who tells her what’s actually going on at this creepy place, and what miracles they’re observing through the power of technology.

But then when the shadowy figure starts appearing not only in Sarah’s dreams, but the other subjects’ dreams, and Riff’s dreams and in everyone’s dreams, and then also when people are awake, then you know we’re all fucked.

The slow burn leading up to where it seems like the figure is appearing in real life, as people, suffering sleep paralysis, but who seem awake, is really well done. The film had me in the palm of its hand.

The film is structured into sections, with titles such as Persona, Anima / Animus, Shadow and Self. Since these are terms about the unconscious that Carl Jung invented, you will not be surprised to find out that this director clearly must have picked up a book and read some of it at some stage. Which I applaud. Reading books is cool, kids.

If we take that as a given, that he lifted some terms from a psych textbook, then we start wondering how much of what we’re seeing, of the images presented, are about parts of human consciousness itself. So the shadowy figure is less a supernatural or primal entity, and more a part of any individual’s psyche, the shadow self.

But then, in a sequence more disturbing than anything that came before, out of nowhere Riff compliments Sarah on being so smart for her age, she says “I’m 18”, and the second she says that I thought “Oh god they’re not going to…”

And they did, dear reader, right in front of my disbelieving eyes. The end result is a very unhappy ending, with Sarah having to go to hospital yet again, but honestly, I so didn’t need to see that.

It would be unfair to say that the flick plummets off of the rails and into a ravine at this point, because it probably started earlier, but even that is no preparation for what happens next, which I won’t spoil, because that would be unfair, but I will say, “damn, you were pretty good up until this point”.

Something frightening happens, then something very strange and inexplicable (though it is hinted at earlier on, when Sarah spies on Riff’s dreams), and then something utterly terrible, which ends the flicks, and prompts us to think “it was all a bad and stupid dream, and I’ll never be able to get my money back”. It’s an ending that probably made a lot of sense as a starting point, but it is debilitating to this audience member, a fatal blow to my sympathies, hopes and dreams.

Come True was, for me, for most of the time, a really solid, really well-made flick. An almost great horror flick, almost completely undone by a crippling ending that renders almost everything we saw pointless. As an explanation, it undoes everything without replacing what we experienced with meaning.

Still, for 75% of the time, you had my attention, and that’s better than a lot of flicks, especially Canadian flicks.

--
"Don't you ever feel like you're seeing something you're not supposed to see?" - every time I go to the beach - Come True