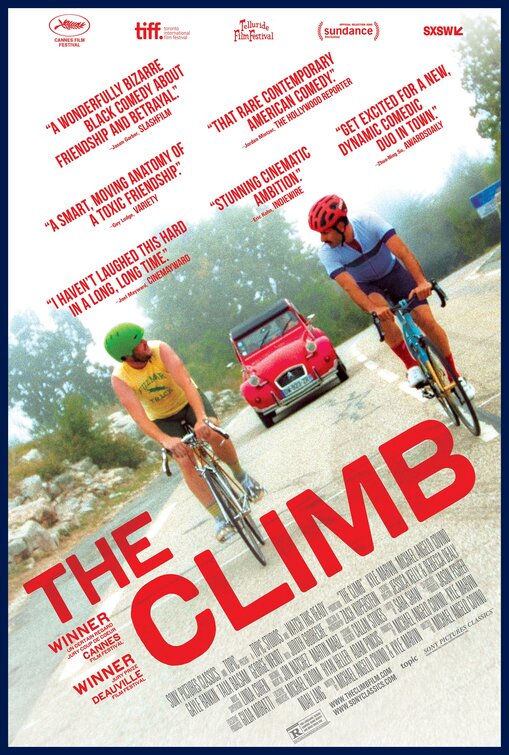 Biking in your 40s and beyond should be a criminal offence

The Climb is about friendship.

I mean, this is not Sisters of the Travelling Pants. This is The Climb, and it is about two adult male friends who’ve known each other since childhood, Mike and Kyle. ‘Mike’ is also the director. Kyle Marvin plays Kyle. They clearly made the film together. Do you see where I’m going with this?

I don’t know if they’re actual lifelong frenemies in real life, but surely they’re bringing something to this too.

I hesitate to call it a comedy, because comedy, as a genre, implies laughter, chuckling, giggling and so forth. It’s funny, but there aren’t jokes. The whole film is immensely funny, in that it’s suffused with irony, and very cleverly done. But it’s not immediately apparent, it’s not showy, really, though it’s very well crafted.

And though I’ve said it’s not showy, that’s a lie, because there’s a section which is one long shot without edits which is incredibly well done, and would have been a nightmare to coordinate and get right, and both the filming and the way it’s put together are phenomenal for a film made with such a tiny budget.

This feels like a labour of love made by people who want to prove they can make something decent and clever, which happened to come out in the year where no-one cared about movies; they just wanted to survive, so this poor flick disappeared unheralded after playing the festival circuit and amusing the chinstrokers and prosecco drinkers that populate that world who then promptly forgot about it.

But I don’t forget. It’s my curse. I am drawn to those who try their utmost and still get swallowed up by oblivion. It’s my calling to ache for the plight of orphans.

The film starts with the chaps somewhere in France, I’m guessing, riding bikes up a hill. Mike is clearly a rider, and pretty fit, and keeps negging Kyle to get him to keep up. It’s on the eve of Kyle’s wedding to Ava (Judith Godreche). Kyle’s pretty excited. He’s a lucky man.

Mike, who’s also the best man, for some reason decides now is the time to tell Kyle that not only was he involved sexually with Ava in the past, but he’s been sleeping with her now, as well.

Understandably, this upsets Kyle. A lot. But it is not Kyle who puts Mike in hospital, but some French driver Mike aggravates with his antics. At the hospital, Ava confronts Mike, who confesses his love, and there’s been a change in wedding plans.

The next section follows immediately after, but I guess some time has passed. Mike and Ava got married, but Ava died unexpectedly. Mike is destroyed by his loss and fucks up the funeral, and Kyle, who for obvious reasons hasn’t seen Mike since he did what Johnny Ramone did to Joey Ramone and KKKed his baby away, at least is there to console him.

With Mike on the downward spiral, Kyle is on the ascendant. He’s reconnected with his high school girlfriend Marissa (Gayle Rankin), he’s working as a jingle writer, and though none of Kyle’s family really like Marissa, at least he seems happy. Kyle’s mom (Talia Balsam) has invited Mike out of pity to attend Christmas with the family, because he has none of his own.

It’s not really out of pity. There’s a great scene where the story transitions from the Thanksgiving celebration where Marissa is trying to train Kyle to assertively say “No” to his mother, and to tell his family that they’re getting married, to the Christmas dinner where Kyle’s mom unleashes her plan.

She knows something about Mike that no-one else has articulated yet. She also knows that she has secret mom powers over Mike, since there is no other mother to manipulate him into doing things. She understands perhaps what motivated Mike to “take” what was Kyle’s previously, and what would again make him act out in order to save Kyle from a distasteful marriage.

It’s sibling rivalry. Mike and Kyle aren’t biological or adoptive siblings, but they might as well be. Mike is, for better or definitely worse, an entrenched part of their family, and what Kyle has becomes immensely more desirable to him because of it, even when there’s no reason for him to “want” it.

I admit that the way I’m speaking about people, actual humans in the film, is both reductive and crass. The character of Ava barely got two lines of dialogue before she died, so she was merely a plot device, a toy the two ‘brothers’ have a falling out over. Marissa gets far more screen time, and has agency, makes her own decisions etc, but there the story becomes more complicated.

Mike has been given, essentially, the green light to wreck another potential marriage, but he claims he’s doing it because Marissa is hateful and doesn’t love Kyle and seeks only to change him and render him unrecognisable. None of Kyle’s sisters and definitely not his parents like Marissa either, but we don’t really get any scenes of Marissa doing or saying anything terrible in order to justify their dislike.

Everyone in the flick speaks of Kyle as being a genuinely lovely person. He’s nice. Everyone knows Mike is an arsehole, an even bigger arsehole than he was before, now that he’s a downward spiraling alcoholic. Kyle is nice, and agreeable and finds it incredibly hard to say no to people. These aren’t always positive traits. It can make someone a bit of a martyr, or a complete doormat, or a soft touch. You could argue that the “family” doesn’t want Kyle to change by Marissa encouraging him to be more assertive because it serves their own interests, rather than wanting to protect Kyle from a manipulative partner.

As for Mike – well, it really seems like he doesn’t want Kyle to marry Marissa, or anyone, really, because he doesn’t want someone else telling Kyle what to do in his stead. He wants Kyle alone, sad and probably overweight, because somehow it serves his purposes.

It’s funny (as in odd, rather than as actually being funny) how much weight is mentioned as a weather vane, as a sign post of someone’s mental health. Kyle at first is overweight, and Mike is fit. When they swap places, and Kyle is the “happy” one, and Mike is depressed, Kyle is trim and Mike clearly is wearing a fake belly in the one scene where they show him sculling whisky just prior to the incredible Christmas party shot. For these two people weight is a strong determinant of whether think they’re doing well or not.

It’s just odd, is all. It bugs me that my appearance in movies would be used to indicate someone is fucked up, but whatever.

I really enjoyed this odd little film. It doesn’t go out of its way to be quirky or cutesy, it feels pretty grounded (not in reality, but in the version of reality we call “believable drama”). People do strange things in the film, just like in real life, but in real life we don’t always have answers when we’re asked why we do the crazy shit we do, why we resent the partners of the people we care about without them having done anything that bad.

Or, why we endlessly forgive those who want us to stay 16 forever, even in our 50s.

I have to say I found the flick surprising, and enjoyable. I wasn’t always able to predict where the story was going to go. It feels heartfelt, but not overly sentimental. It’s honest about what some long term friendship and family dynamics are like without drowning us in toxicity or sugarcoating the sometimes shitty things we do to each other. Sometimes the bonds we have in life seem unknowable to others, sometimes we are mysteries to ourselves.

The Climb isn’t about the benefits of being friends with someone for thirty-forty-fifty years: it’s about how relationships are complicated, good people do shitty stuff sometimes, and sometimes people forgive unbelievable stuff because our souls aren’t designed to carry the burden of resentment forever.

For something so naturalistic, I really loved the performances, both of the main leads, but also many of the people around them. Even Norm from fucking Cheers is here, and he’s good for once. Gayle Rankin, as the hated Marissa is great in this like she is great in everything; she’s probably best known for playing the Wolf Girl wrestler on GLOW, a Netflix show I utterly adored and I cannot believe they fucking cancelled it.

The Climb deserved better from this cruel, uncaring world. I hope Kyle and Michael get to make more films together, if their friendship can survive it.