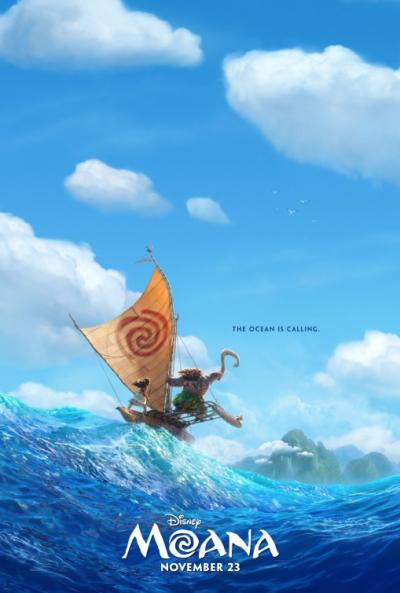 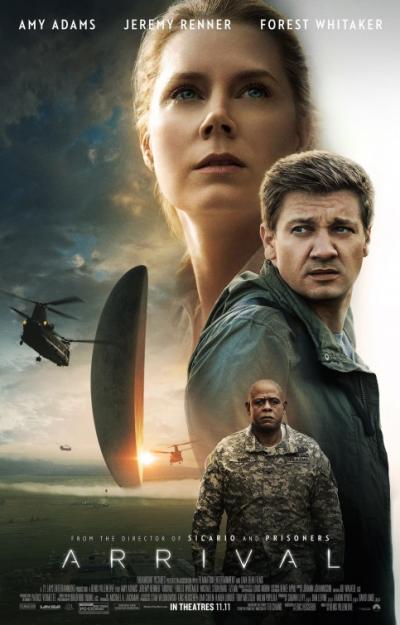 With hope and patience and open hearts, no matter the colour of blood they
might pump, perhaps we can figure this puzzle of our existence out.

Arrival is definitely not an action flick masquerading as a science fiction flick. It is certainly about a first contact scenario with what we would call actual alien aliens, who appear on Earth without even the courtesy of an advance email or nothin’.

This is enough to make the leaders of several countries think “We should be blowing the ever-living fuck out of them, because their very presence makes us uncomfortable”.

It’s frustrating to see, but when I look at the world we currently live in, it doesn’t seem that far fetched. When some ‘just listening to right-wing extremists on the internet’ Marines think, for no sensible reason “well, let’s just blow them up!”, it seems discordant, and arbitrary, but again, I look at Trump’s America, and I don’t think the naughty soldiers would have even been able to wait as long as they did. 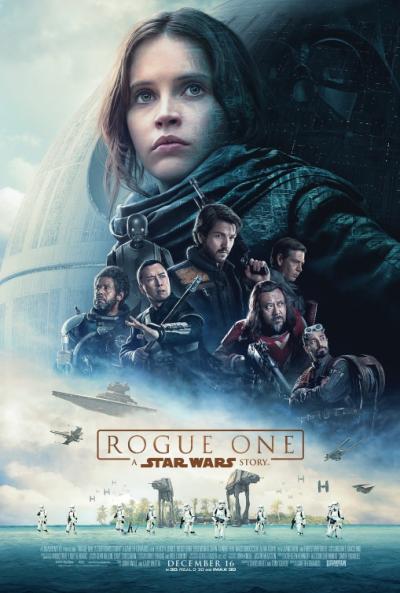 I don't know why, but seeing the addendum "a Star Wars story" makes
me want to claw my eyes out for some reason.

Yeah, so, Star Wars movies: for or against?

They always make a billion dollars, they’re as familiar as cheesecake with a similar level of consistency and taste, and they’re completely and utterly unnecessary.

I ask myself what need there is (other than the financial) in this world for more Star Wars movies, especially since there seems to be no intention or interest in telling any ‘new’ stories, just in telling the previous ones again and again. The Force Awakens was maligned by some for being a retread of A New Hope, but what would you even say about this one here, Rogue One, replete with its fixation on daddy issues, ending, as it does, exactly at the point where A New Hope, or Star Wars, as we used to know it as, begins?

It’s less of a new construction, and more of an annex or extension on an existing McMansion that’s already plenty monstrously big okay thanks for asking bye.

It was, somewhat dishonestly, touted as a substantially different kind or type of Star Wars film, since it didn’t have any Jedi or Skywalkers in it and had a very different emphasis, being predominately more of a war movie, or at least as much of a war movie than usual. 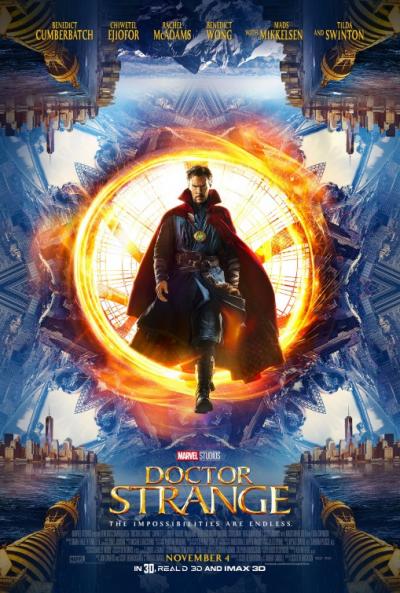 The only thing strange about this guy is his facial hair. And his clothes.
And his name. And his accent. But other than that, Doctor Normal.

Really, I’m that cheap a date.

I wasn’t really expecting to enjoy this as much as I did, but that’s because mostly I think my decision-making abilities have taken a hit in the last couple of weeks. When presented with the option of watching Arrival, that new, apparently thoughtful and uplifting science fiction film starring Amy Adams, or Doctor Strange, Marvel’s latest attempt to absorb the entirety of the world’s money, I chose the path of least intellectual requirement.

Yep, I had the choice of watching something emotionally engaging and intellectually satisfying, and something that looked cool and trippy, and I essentially opted, or at least argued in favour of the Happy Meal option.

Why? Well, I could wax rhapsodically about the actual darkness that has started spreading across the world, and how at the moment I just don’t have it in me to engage intellectually or hopefully with anything right now. I just can’t even, as the lazy phrase goes. It’ll come back, because it has to, but for now I just can’t goddamn stomach anything that requires me to think or feel too much about anything. 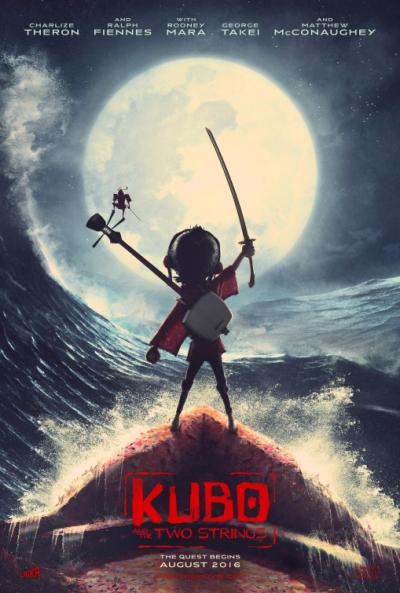 He's got a sword, and he's going to stab the moon with it

I wanted to love this, I really did. I love most of the stuff that the animators at Laika Entertainment have come up with thus far. They’re idiosyncratic as purveyors of animation, getting the distinctive look you’re not going to confuse with any of the other studios that comes from still using a lot of stop-motion (physical) animation in their movies.

It’s certainly the brightest and best looking of their works, shiniest and cleanest, compared to Coraline, The Boxtrolls and ParaNorman, which all looked somewhat gothic (in Coraline’s case) or a bit gangrenous. They were shooting for a mass audience, and they didn’t get it, which is a bit of a shame.

It’s ambitious, too. It opens with a woman in a boat trying to get somewhere in a terrible storm, one which wrecks her little boat and wounds her terribly, but even worse she is not alone. A baby boy is with her, and they crawl together into a cave to die.

It’s a very idyllic cave, beautiful ocean views, though probably a bit drafty. Some time passes, and the baby becomes a boy, and what a boy. He looks after his damaged mother, who sits motionless all day, and raises money for some rice by telling stories at a nearby village. 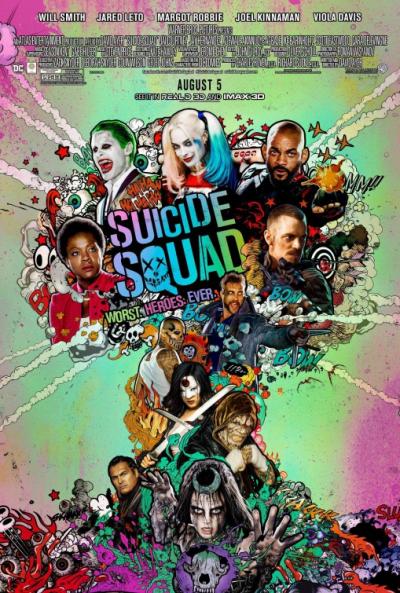 No, wait – And I thought Batman V Superman: Dawn of Justice was a piece of shit…

Suicide Squad is a whole other unique piece of shit. It’s terrible, oh so terrible. This is the standard met where intelligent people make movies for people they see as being irredeemably stupid.

Oh so many aspects of this movie are terribly ludicrous. Sure, it’s logically possible to make arguments about a whole array of movies and whether they should exist or not. Knowing that this is based on a comic book doesn’t make this make any more sense as a premise. Even, wait, maybe I’m contradicting myself, even if I buy Amanda Waller’s (Viola Davis, who is excellent in this but it’s not enough) plan as being a necessary one, how is it that it makes any sense that these particular morons are the ones you would force into action in order to save the world?

Yes, yes, I understand The Dirty Dozen style premise. I understand it because I’ve watched The Dirty Dozen a bunch of times, and I’ve seen a stack of other films that ripped the idea off as well. There’s nothing new about it under the sun, being this sun, or any of the other suns around the galaxy around which planets inhabited by comic book geeks orbit. 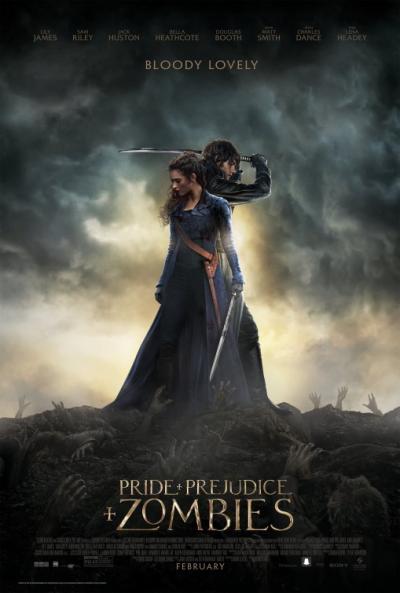 It should have been more fun than this.

It should have been more… something, anything than this.

There’s no argument that the world needs more versions of Pride and Prejudice. We don’t. Thanks, we’ve had plenty, there’s no more room at the inn.

I say that yet I happily watch any of them whenever they appear on cable. Especially that one, you know the one, the one that’s sex on a stick, with Colin Firth as Darcy and Jennifer Ehle as Lizzy Bennett. Even the ones I don’t like I still watch, like that one with the stick insect and the other guy, or that Bollywood ‘inspired’ one, or any of the literally one million other versions. 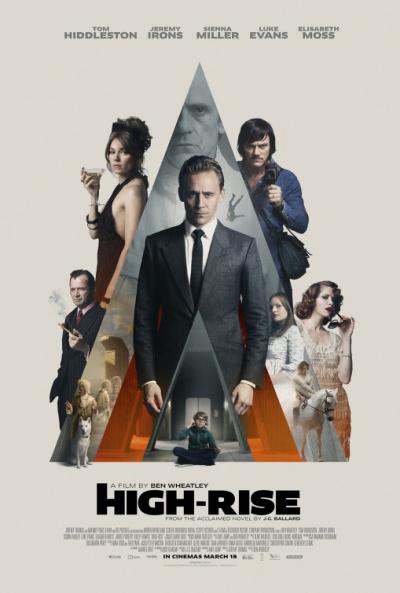 I get it, you're trying to remind people of A Clockwork Orange.
No-one cares, poster design nerds.

I don’t know about this flick. I’m not sure I got it, really. I'm not sure there's enough of anything to get.

I mean, I watched it. I saw lots of images, and heard lots of dialogue, and most of that went through my eyes and ears into my brain, and I’m recalling many of those moments and images and ideas right now, but I’m not sure what they add up to.

Ben Wheatley is a beast of a Brit director, who’s made a swag of vicious flicks, and this is no less vicious, though it seems like a bigger budget / bigger deal than what he’s handled previously. I mean, after all, this has Tom Hiddleston in it, in a lead role.

Even more (slightly less) impressive than that, this has Jeremy Irons in a key role.

High-Rise is based on a book by JG Ballard, which is a name that doesn’t resonate with most people, but it does with me, because I went through that stage that many aging literature nerds of my generation went through when you read many of the books of particular writers all in a row: like you go through your Bukowski stage, your Henry Miller stage, your Vonnegut stage, and then, during your science fiction phase, your Philip K. Dick stage and your Ballard stage. And I read a bunch of them, including this. 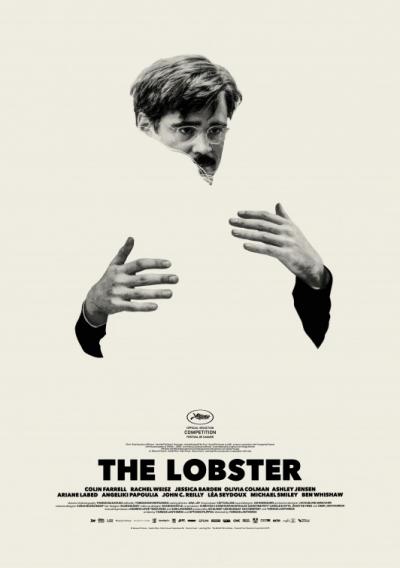 Consider The Lobster. Now maybe consider something else.

These movies from this Greek director Yorgos Lanthimos, like Dogtooth, Alps and now The Lobster – I question whether they are movies to be enjoyed, or movies to be endured / survived.

They’re definitely strange, that’s for sure. Being able to say “there’s nothing else out there quite like it” can be used as much as a compliment as it can as a complaint.

I have watched too many movies in my life, and too much television, and what that means is that, just like everyone else, I can sometimes be energised by watching something completely out of left field, but I can just as equally be left confused and bemused by something so fundamentally odd that my mind can’t quite latch on to it.

I like to think that I kinda ‘got’ what was going on with Dogtooth – a strange flick where a very strange set of Greek parents bring up their kids in absolute isolation, warping their sense of language, sex, the world, everything – but having watched The Lobster, it’s more than likely that I was completely wrong about that flick. As for this flick, well, I have no idea. 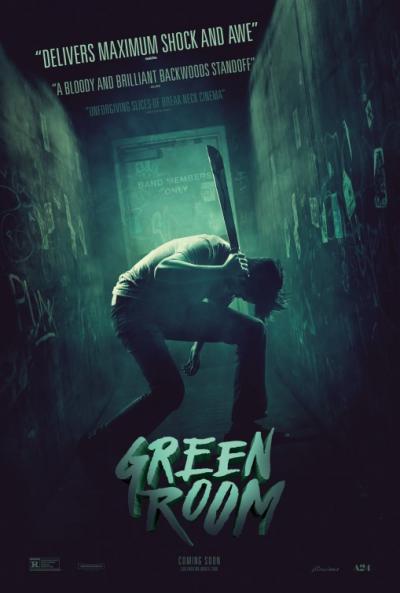