Monsters. They’re everywhere. Not just under your bed, or bursting out of your closet when you’re not looking, or threatening you on public transport with their odours and with requests for money.

They’re also, apparently, in Mexico, trying to get across the border to the States in order to make some money and eat some quality junk food. These monsters are so terrible that a huge wall has to be built in order to keep them out, away from decent, law-abiding white people.

And then there’s this strange flick some guy made about some actual monsters, as in, giant alien octopi, that have infected Central America with their casual destruction and socialist economic programs.

Clearly, military strongman and certifiable egomaniac Hugo Chavez is the real target here. Whether he is or not, there’s monsters out there, and the going is getting tough.

dir: Gaspar Noè
[img_assist|nid=1330|title=Sure, enter the void if you want, but how the hell do you get out?|desc=|link=none|align=right|width=450|height=450]
What a crazy, fucked-up film.

Preparing yourself for a Gaspar Noè film is not something that is genuinely possible. Having seen others of his flicks, none of which I will ever see again, I was determined to not see this flick ever as well. Since I’m reviewing it, well, that means something changed in my thinking, and I’m glad, to an extent, that it happened. Not too proud to admit when I’m wrong.

A friend of a friend who works in the film industry told me she saw the flick at a festival, and that it was quite an amazing experience. Though I knew nothing about her before that day, her thoughts, conveyed to me over a long and boozy conversation on a Saturday afternoon at a local pub, regarding flicks in general (that she’d worked on in New Zealand, being those flicks involving children wandering into a Witch-filled wardrobe and a Jesus-substitute lion called Aslan) and this flick itself intrigued me. They intrigued me to the point where my absolute determination to never again be violated by a Gaspar Noè flick wavered, and over time led to a confident ‘maybe?’

dir: Lee Unkrich
[img_assist|nid=1326|title=He's an Intensive Care Bear|desc=|link=none|align=right|width=449|height=252]
Yeah, I know, it’s hardly brand new fodder worthy of reflection and critique. But Pixar flicks are the pinnacle of the animated heap: every release is an event, they make more money than Jesus, and nobody does it better.

And I love their flicks with a passion, the kind of passion most other people reserve for quaint garden gnome collections or pointless sports results. Thus, reviewing their latest gift to us, the luddite, barely computer-literate, unwashed masses, is less of a necessity than an obligation.

Toy Story 3 is as great as any of the other flicks in the series. Ranking them is pointless. You could point out that yet again the technical expertise envelope has been pushed even further out, with computer-generated animation second to none, but that misses the point. These movies are beloved not because of the quality of the graphics, but because of the quality of the story-telling, and the deep nostalgia they inspire in adults.

dir: Debra Granik
[img_assist|nid=1324|title=Let's hunt us some squirrel|desc=|link=none|align=right|width=435|height=290]
It’s criminal that it’s taken this long for Winter’s Bone to be released into the cinemas of Australia. It’s a damn shame. Usually the length of time it takes certain films to appear here doesn’t bug me, because 600 flicks get released each year, and for every flick I’m not getting to see, there are dozens of others I could be seeing instead.

But there’s something about this flick that, on some level, makes me angry that I had to wait eight or so months before I could see it in the salubrious confines of the Cinema Nova multi-arty-plex.

The film itself, and the main performances, are better than fine, they’re great. There’s some problems arising with the ending, but I can forgive them since for around 100 minutes, Winter’s Bone, which is essentially a detective story, had me riveted to my seat. There’s not a fire, disaster or siren’s call of promised orgasmic pleasures that could have coaxed me out of that seat before the end.

On the other hand, I know these kinds of films that seem to focus on, shall we say, the salt of the earth, reek of condescension and insult to those who think they’re being exploited or mocked. It doesn’t strike me as relevant, but then, I’m not from the Ozarks or the Appalachian Mountains, and I wouldn’t know moonshine from shoe shine.

dir: Robert Rodriguez & Ethan Maniquis
[img_assist|nid=1320|title=He can jump your mum's border anytime|desc=|link=none|align=right|width=400|height=300]
Like Oscar the Grouch, I, occasionally, love trash. Love it to death. Robert Rodriguez makes some exceptionally trashy flicks. Some I hate, some I love, and the more enjoyable ones are pure, much adulterated trash.

Sin City, Planet Terror and this latest visual and aural amoral atrocity are flicks of his that I’ve greatly, greatly enjoyed. Why? Why these ones and not his parade of other flicks that either bored or actively irritated me? I mean, in all honesty, is there really much of a difference between this and Once Upon a Time in Mexico, which I loathed? Gratuitous violence? Too many characters? Gore on tap?

Yes, yes and yes. And add to that the immensely transparent agenda of arguing against the exploitation and demonisation of so-called illegal immigrants who stream across the border from Mexico desperate for a better life, and you have a live action ‘contemporary issues’ cartoon with a protagonist who is the meanest looking Mexican ever to star in a motion picture made in this part of the galaxy. 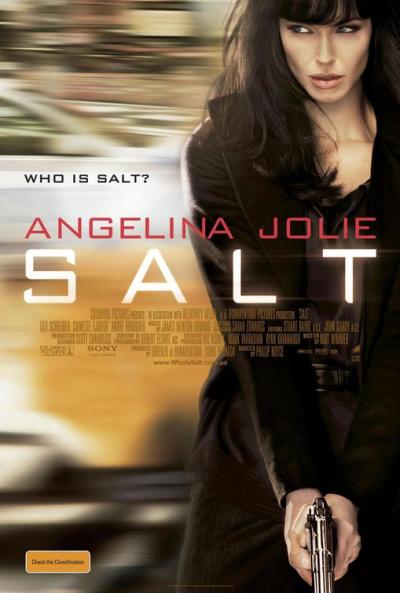 And you thought it was about the ionic compound…

Were you disappointed to find out that Angelina Jolie wasn’t going to be playing this most ancient of food additives? I know I was. Imagine her, sitting on a table, in one of those grinders or in a shaker, just sitting there patiently, waiting for someone to pick her up and sprinkle her onto their food during dinner. The twist is, though, the middle-aged people at the dinner are all on a low sodium diet, due to doctor’s orders, and Angelina Jolie goes sadly unused, uneaten, untasted for the whole film.

It’s a story about longing, about unfulfilled potential, about loss of purpose.

Sure, it’s far more sedate than what’s actually on offer here, but there should be a place for films as deathly dull as the one I just described. Salt, this Salt, is possibly a lot of things, but it certainly can’t be accused of being dull.

dir: Taika Waititi
[img_assist|nid=1314|title=It's a Boy!|desc=|link=none|align=right|width=360|height=390]
Do you remember a time when Michael Jackson was neither an obituary notice nor a punchline to an increasingly sad set of jokes? Do you remember when everybody had names that came from popular alcoholic beverages and American soap operas? And do you remember when ET was the closest we could come to a cinematic hero who was like Jesus, Buddha and Chuck Norris all rolled up into one?

If you can’t, then you’re either under twenty, you’re Amish, or you’re just not from an era that has much in common with the world Taika Waititi tries to conjure up for our delectation and amusement in this here flick Boy.

Set and filmed in Waihau Bay, which is on the East Cape, south-east of Auckland on the North Island, Boy is also set in the heady days of the 1980s, 1984 to be exact. Boy himself (James Rolleston) greets us with a show-and-tell summary of his existence in this impoverished town, and his complicated family life, and all the things he loves or doesn’t love about his life.

The tone of the flick, like Boy himself, is light and funny. He’s a chatty and sweet boy, even if his introduction to us involves a fight with a vulgar schoolmate who taunts him over his mother’s death.

dir: Ridley Scott
[img_assist|nid=1308|title=It's grim up North, and especially in Russell's head|desc=|link=none|align=right|width=450|height=275]
Give it a rest, Russell, honestly.

And you too, Ridley. Stop pretending you’re all prestigious men of quality deserving awards and kudos. You’re both hacks and you know it.

And now you’ve taken a much beloved myth about some woodsy guy sticking it to The Man, and you've turned it into a grim Braveheart clone. For shame, gentlemen.

A few years ago, I remember reading a headline somewhere scrawled onto the tubes of the internets saying that Russell Crowe would be playing Robin Hood. My first and only thought was, “That’s boring, stop being so boring.”

And then I thought no more of it, until months later I read another buzzy story saying that the flick was going to be called Nottingham, and it would star Crowe in the main role, but that the clever hook would be that Crowe would be playing both the Sherriff of Nottingham, Robin’s classical antagonist, and Robin Hood as well. I don’t mean as twins or clones or anything, just that the role and script as envisaged had the Sherriff masquerading as his own fabricated enemy. Upon reading that I remember thinking, “That actually sounds a bit interesting, I wonder how they’ll pull it off.”

Scott Pilgrim vs The World

dir: Edgar Wright
[img_assist|nid=1306|title=Do you think Michael Cera ever gets sick of being Michael Cera?|desc=|link=none|align=right|width=296|height=500]
Oh, Michael Cera. If you didn’t already exist, they would have had to construct you from the corpses of several painfully thin hipster douchebags, held together with wet papier mache from indie street newspapers, deliberately ironic hipster unwashed t-shirts and neurotic tics so pervasive even Woody Allen would give you a wide berth.

And they would have constructed you too, so that you could play Scott Pilgrim. There probably isn’t a person on the planet better suited to playing this supremely annoying character. You were handpicked by fate, by the universe, by all the random possibilities that lead to an almost supernaturally predetermined result.

For that I congratulate you. And, also, for becoming this generation’s white Urkell.

The weird thing is I actually like Michael Cera. He only ever plays one kind of character, and, as Scott Pilgrim, he’s the weakest and whiniest version of that Michael Cera character (except when he’s fighting). I like him even when I find him annoying, which is a remarkable trait to possess. As Scott Pilgrim, it’s ultimately irrelevant how he plays it, because it’s almost like Bryan Lee O’Malley wrote the comic book with him in mind, which he clearly could not have, having never met him.

dir: Neil Marshall
[img_assist|nid=1303|title=Let's kill us some noble savages together, hungry eyes|desc=|link=none|align=right|width=450|height=294]
What a sweet relief! Thanks for making a decent film again, Neil Marshall.

His last flick Doomsday was hilariously bad, but with Centurion he’s regained his stature (in my eyes at least) as someone who can make decent action flicks. Dog Soldiers was a long time ago. The Descent is his masterpiece thus far (and is not tainted by the cheapie sequel he didn’t direct). Doomsday made me think he was going to turn into a hack on the level of a Paul W.S. Anderson, Kurt Wimmer, Len Wiseman or David S. Goyer: purest of total hacks to a man, which is why I keep going on about it.