It’s true. I play a lot of video games, I’ve watched a lot of movies, and this is a pinnacle of visual entertainment.

Oh, wait a second, I have to qualify something a bit further. I loved every single centimetre of visual real estate that didn’t involve humans or people talking.

Really, visually and aurally, thanks to an amazing soundtrack / score by Daft Punk, who have a curious cameo in full costume, so it could have been two Banksies instead for all I know, it’s amazing. But when the humans intruded, what with their annoying heads and flapping gums. The problem is when they start talking. And continue talking.

Even worse, when people say deeply stupid shit like “now that’s what I’m talking about” in a flick that probably cost a billion dollars to put together, it makes me wonder whether the studio is taking a diarrhoeic dump, wrapping it up in nanotechnological silk scarves and then singing “Happy Birthday” to me as it hands it over, expecting me to not only pay for it, but to be grateful about it as well.

dir: Tetsuya Nakashima
[img_assist|nid=1381|title=Remember the days of the old school yard? We used to bleed a lot|desc=|link=none|align=right|width=400|height=300]
From revenge… to more revenge. This time, we’re doing it Japanese style.

Now, just to get all simplistic, reductive and borderline racist, if the old saying regarding revenge goes that it is a dish best served cold, like sushi, then what this particular director and cast do is take that revenge, like a platter full of sushi, dip it into a tank of liquid nitrogen, and shatter the freeze-burned remains with a HIV-covered sledgehammer.

Man, do they serve this revenge up cold. And, man, do the Japanese hate school kids.

Confessions is a flick where a whole bunch of people confess to each other or to us in the audience in order to tell the story. There are bits where people talk to each other, but mostly people are talking in monologues.

Our first speaker is a junior high school teacher who explains to her class that she’s quitting her job, and why. For the next half hour, mostly she stands in front of the class and talks earnestly but quietly to a bunch of savages who are barely in their teens. They carry on like they’re on the island from either Lord of the Flies or Battle Royale, just with lots of texting involved, but they listen and react whenever she says any crucial element of her story.

The Kids Are All Right

dir: Lisa Cholodenko
[img_assist|nid=1375|title=Insufferable. Utterly insufferable.|desc=|link=none|align=right|width=450|height=284]
And here is the last of my reviews of the ten flicks of 2010, nine destined to lose the award for Best Picture, and the one that will doubtless win at the upcoming Academy Awards. I've seen and reviewed all the rest (Toy Story 3, True Grit, Social Network, King’s Speech, Winter’s Bone, Inception, Black Swan, 127 Hours, The Fighter), and felt, for some inexplicable reason, that I had to review the one remaining flick if I was ever going to pretend to have an informed and important opinion about the annual filmic circle jerk scheduled to occur on Monday.

So here’s my review of The Kids Are All Right. Enjoy.

If you permit me to enter the American Culture Wars for a moment, and if you’ll grant me the license to pontificate about the aforementioned despite the clear fact that I have absolutely no stake in that polarising political / ideological bullshit by dint of nationality or geographical location, please just let me say the following: This flick reminds me of how utterly insufferable we are.

dir: Sylvain Chomet
[img_assist|nid=1372|title=And stay out of my goddamn hat, you puffed up rodent!|desc=|link=none|align=right|width=450|height=252]
The Illusionist, not to be confused with the flick of the same name that came out a few year’s ago with Ed Norton as a weirdo with a beardo, is the fourth film we can believe that Jacques Tati wanted to make but never got the chance to.

Who’s Jacques Tati, I hear you ask, already overwhelmed with irritated yawns before finishing your own thought process? Well, he was a French guy who made some films that pretty much tried to outdo everything Charlie Chaplin and Buster Keaton did, except he did it about thirty years after they did it, when colour and sound existed in cinema as well.

Jour de Fete, Mon Oncle, Monsieur Hulot's Holiday, Traffic – these are famous flicks to film wankers, turtleneck wearers and chin strokers the world over, but they might not be common currency amongst most people. Sure, I’ve seen them, but I am a film wanker who strokes his chin ever so definitively, though turtlenecks are a bridge too far.

Let the Right One In was only made a few years ago, but it suffered from being made in the native language of its author, being Swedish. When certain Hollywoody types saw that film, they thought, “The film is so awesome that the only way we can improve upon it is by making it in American. That’ll earn us a packet, and show the Swedes how it’s really done.”

Of course, they remade it, it was little seen, and the point of the exercise, or the merits, remain solely on the artistic level.

I liked Let the Right One In plenty when I saw it at the cinema, and I read the book as well. In Swedish, initially, which was quite frustrating, since I can’t read Swedish. Then I tried in Swahili, then Farsi, and finally in an English translation. The book is solid, too. I have no particular axe to grind against an American remake in theory, so I went into this with my closest approximation of an open mind.

dir: Danny Boyle
[img_assist|nid=1368|title=Rock and Roll|desc=|link=none|align=right|width=406|height=600]
Whatever problems I might have had with Danny Boyle’s films in the past, whatever misgivings I might have had dwindled to nothing fifteen minutes into this film. In the first few minutes I was worried that I was going to be watching something closer to The Beach or Life Less Ordinary end of Boyle’s oeuvre, rather than the actually watchable, decent end of the Boylian spectrum (Trainspotting, 28 Days Later, Sunshine, Slumdog Millionaire).

But then something happened at exactly 15 minutes in, and the title flashed up on the screen, and I realised that Aron Ralston’s (played by James Franco) real story had just started.

And oh holy fuck what a story it is.

That it’s a true story, and a very narrowly defined story, based entirely on the relevant 127 Hours in question of Ralston’s life, would almost make you think that telling this story in movie form would be impossible. Telling it well, at least. Telling it poorly would seem to be piss-easy. Telling it so that it’s heroically bad would take real hack skills, some of which Boyle has hinted at in the past.

dir: Derek Cianfrance
[img_assist|nid=1366|title=It'll all end in tears, like everything else|desc=|link=none|align=right|width=450|height=580]
Jesus, what a fucking depressing film.

And what’s it about? Well, it’s about two people not in love anymore.

I don’t think I could ever bring myself to watch this flick again. That’s not entirely true: it’s really well made, I guess. And the music is really nice and appropriate, and heartbreaking at certain points. And it’s well filmed and well acted.

But, jeez, does it hurt to think about it.

Dean (Ryan Gosling) and Cindy (Michelle Williams) are a married couple who are clearly not happy. Their marriage is clearly headed towards dissolution. Dean is surly, drunk and hectoring, passive aggressive as well as just outright aggressive, fuelled by his sensing that Cindy is shutting him out.

Cindy clearly cannot stand Dean anymore, and their every remark to each other is brittle, jagged and fraught with peril. Don’t mistake this for some highfalutin Who’s Afraid of Virginia Woolf retread where sophisticates are tossing martini-enhanced barbs and cutting witticisms at each other. They, being the two leads, play it like real people unwilling to face the reality that they shouldn’t be together anymore. 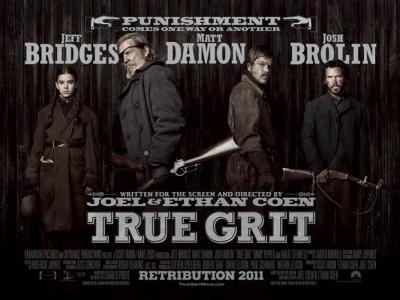 That's some mighty fine squint-acting y'all doing there

Remakes are usually pointless. They’re often just emblematic of the risk averse nature of Hollywood, which wants only to shiny up the tried and true for profit and plaudits. This isn’t even the first time the brothers Coen have remade something: they did it before with The Ladykillers, receiving global yawns for their troubles.

But they’ve also made a career out of making films about other films, or at least films that don’t usually exist as separate, independent entities, but which exist on that ironic meta level as if to comment on the genre they’re indulging in at that given time.

True Grit is fairly straight ahead, down the line, and doesn’t indulge as much in their genre commentary; as in, it’s not like it either deconstructs the earlier flick starring John Wayne, or the Western genre itself. The story comes from a book, and they’ve stayed true both to the book and the earlier film, without indulging Jeff Bridges the way John Wayne was indulged by the makers of the earlier flick.

dir: David O. Russell
[img_assist|nid=1362|title=Idiots on parade|desc=|link=none|align=right|width=450|height=284]
David O. Russell is a director not known for sports flicks. He’s known, if he’s known at all, for three things: directing Three Kings, which remains one of the only decent flicks set during the first Iraqi adventure; making a thoroughly stupid flick called I Heart Huckabees; and for a screaming match that occurred and was recorded between himself and Lily Tomlin on the set of that flick.

Mark Wahlberg is best known for having a brother who was in New Kids on the Block, who had a short career as rapper-performer-Renaissance man Marky Mark, and playing John Holmes stand-in Dirk Diggler in Boogie Nights. He is not well known for his acting ability.

Christian Bale is best known for screaming abuse at people on the set of some films he’s been on. And a wicked eating disorder. He’s also an actor, or so I’ve been told.

The three of them, oh, and a bunch of other people as well, collaborate here in order to make a fairly amazingly good film, one which, noting the participants, the location, and what they’re famous for, I couldn’t really have predicted.

dir: Tom Hooper
[img_assist|nid=1360|title=Get out of the road, Ma and Pa Crown Jewels, or we'll run you lisping hemophilliacs down|desc=|link=none|align=right|width=400|height=373]
This is what you get when Ham (Geoffrey Robertson) meets Wry (Colin Firth): a tasty, award-winning sandwich.

Could there have been a confection more Oscarbaity than this? Was the public so desperately crying out for more cinematic proof that royal personages are so much better than the rest of us? Eventually we’ll be able to put all these films together into a neat collage that exists to convince us only that as commoners, we really do suck compared to all those kings and queens.

And I get enough of that already, thanks for nothing.

The King’s Speech is an almost clever double-meaning title referring both to a specific speech which apparently saved Europe from Hitler, and the speech impediment endured and surmounted by the reluctant eventual heir to the throne, George VI, ably played by Colin Firth. Colin Firth will so win an Oscar for this performance. It’s not because it’s the performance of the year (something so subjective and unmeasurable in any meaningful way so as to be meaningless), or last year, or because this characterisation is so wonderful and crucial to our understanding of the time involved or humanity general.