dir: Terry George
[img_assist|nid=977|title=Don Cheedle with the guy he's playing in the film. Freaky.|desc=|link=none|align=right|width=350|height=317]
Ah, the cinema of guilt. Worthy movies that seem to chide audiences and make you feel bad for a) not having been more concerned when something really bad happened in history, or b) feel even worse for not having seen the film sooner. All your bullshit excuses count as nought in the face of it. So you sheepishly file into the cinema one day, prepared to eat your greens and say it tastes like ice cream even if it doesn’t. Out of stinky, middle-class guilt.

If the film’s actually good then it’s a definite bonus. Because that way you don’t have to endure watching the film like it’s a trip to the proctologist just so you can convince other people that you are sooooo switched on and overflowing with compassion. Hotel Rwanda is just such a film.

It’s not Schindler’s List, but nor would you want to be. We don’t need another epic like that just yet. It’s still Oscarbait of the highest order, mostly because when a film is about such topics (the Rwandan massacres from the 90s), it feels like the height of insensitivity to raise any objections to even the slightest flaw, to mouth the tiniest of criticisms, you inhuman monster.

dir: Olivier Assayas
[img_assist|nid=980|title=This wouldn't be the first time Canada drove someone to drugs|desc=|link=none|align=right|width=430|height=284]
Clean is a strange but oddly satisfying film. It’s strange in that there’s no clear plot, but there is a lot going on in the life of the main character Emily Wang, fantastically played by Hong Kong legend Maggie Cheung. Enough at least to keep us entertained.

This is a film that defies the genre it seems to be about: addiction and its malcontents, and derails the predictable path to redemption by offering something low key but more complicated.

Emily is portrayed at first as equal parts Courtney Love, when she still had her hooks in Kurt Cobain, and Yoko Ono as the destroyer of both the Beatles and John Lennon, eventually. That’s not a pleasant character on paper or on the screen. She has managed to attach herself leech-like to an artist, Lee Hauser (James Johnston, formerly of the band Gallon Drunk and more recently of the Bad Seeds), and brought him down to her level by sharing the depths of her addiction with him.

Anyone that still cares about washed-up Lee hates Emily and what they see as the damage she has visited upon him, but it’s not like Lee’s going to be around for that long anyway.

dir: Stephen Sommers
[img_assist|nid=979|title=Even for a flick with Kate Beckinsale in it, this is pretty dumb|desc=|link=none|align=right|width=315|height=395]
Not that anyone asked, or that anyone wants to know, but I can honestly say that I’ve never paid to have sex with a prostitute, a working girl, a ‘lady of the night’. Don’t get me wrong, it’s not a comment on the ladies, I know they do a hard job and they earn their money bringing to fruition the old business success mantra about the customer always coming first. I joke about hookers and cocaine all the time, but it’s just that: a joke. Who can afford that kind of crap when a bottle of decent single malt whisky costs between $60 and $80?

The reason I hold this particular credo, which has nothing to do with morality or personal ethics or anything of the sort, is that I can imagine after money changed hands and business was taken care of, the deed being done, I’d be filled with a profound emptiness inside. It would come from the fact that I had to pay money to get someone to have sex with me, a person who couldn’t possibly even remotely have any tender feelings towards me. Sure, live long enough and you end up having sex with a bunch of people that can’t stand you and whom you can’t stand, for a multitude of different reasons. But at the very least you shouldn’t have to pay cash for it.

dir: Stephen Chow
[img_assist|nid=983|title=Awful lot of people falling over for no real reason|desc=|link=none|align=right|width=448|height=363]
Who? What? What the fuck? Huh?

So you may not have heard about the so-called follow up to Shaolin Soccer by Stephen Chow. Unless you’re in Melbourne I don’t know if you can even see it yet unless you wander down to the Chinatown cinemas in the middle of the city’s Golden Triangle (Russell, Bourke and Swanston Streets). And since according to my sources it’s the last Chinatown cinema still operating in Australia, until it starts playing in the arthouse cinemas in a few month’s time (since Sony snatched it up), it may seem a bit pointless reviewing it when those few people who might be interested in seeing it don’t really have the option. Unless they get a pirate copy from someone who looks dodgier than the guy behind the counter at a sex shop.

It’s one of the reasons why when I see films at film festivals I mostly don’t review and post about them. It seems both pointless and self-aggrandising, as if to brag about films others can’t see yet just to show how wonderful and nerdy I am. Which I’m not. I swear I’m not, you’ve got to believe me.

dir: Lodge Kerrigan
[img_assist|nid=978|title=Look out for the crazy ginga|desc=|link=none|align=right|width=402|height=341]
This film is about a crazy guy. No, it’s not about Jim Carrey. This isn’t the fun kind of crazy, as in endlessly entertaining antics of eager eccentrics, or the transgressive kind of crazy you get from ‘enjoying’ the adventures of psychopathic serial killers like Hannibal Lecter, Norman Bates or the Pope.

This is the real kind of crazy. As in, mental illness that isn’t entertaining for entertainment’s sake. That isn’t quirky, grandiose and cute. That is uncomfortable, unsettling and unexplainable.

William Keane clearly, right from the start, isn’t playing with a full deck of cards. Although, he probably does possess a full deck, it’s just that the cards are made of sea horses, radioactive gingerbread and bird teeth. He’s clearly suffering from some kind of dissociative disorder; we’re just trying to work out how bad the damage is and where it comes from.

We first watch him asking people at the station if they’ve seen his daughter. Right then and there we know he’s mad, because he also mentions that she’s been missing for a long time.

Okay, so he’s either a crazy guy; or a crazy guy with a missing daughter, or a sane guy driven mad by the loss of his daughter.

dir: Trey Parker
[img_assist|nid=975|title=Keeping the World Safe from Everything Except Them|desc=|link=none|align=right|width=306|height=450]
It's a new world, which looks remarkably like the 'old' world as
portrayed in movies circa the 1980s. The entire globe is defined (as
in European, Egyptian and Korean cities) in terms of distances and
directions from the US. The soundtrack is the power chord laden
empty-headed nonsense as typified in glorious fashion by the title
song 'America? Fuck Yeah!'; a song so good Van Halen are kicking
themselves that they never recorded it. And the jingoistic action is
over the top, constantly explosive and cheesy / ridiculous in the
extreme. In short, this is an 80s action film parody chock full of the
requisite cliches of the era, except with puppets.

dir: David S. Goyer
[img_assist|nid=976|title=Even dumber than it looks|desc=|link=none|align=right|width=420|height=420]
You have to wonder what the attraction is with this franchise. Wesley Snipes hasn't exactly done any memorable acting work in donkey's years. The Blade character is so two-dimensional that when Blade walks side-on from the camera I always expect the guy to be paper-thin. It hasn't really set the box office alight (none of the three films were big earners in that respect). Marvel, I'm sure, has plenty of other comic book franchises dying to be made (and I'm sure plenty of them are already in development).

As a vampire scenario it's not a particularly intelligent, original, amusing or otherwise worthwhile one. The main character's motivation is solely to kill vampires and try to gruffly protect humanity (which seems secondary). There's not a lot of room for character arcs, thematic development, social significance or transcendent insights into human or vampire nature amidst the averagely choreographed fight scenes and the most ordinary action set pieces. 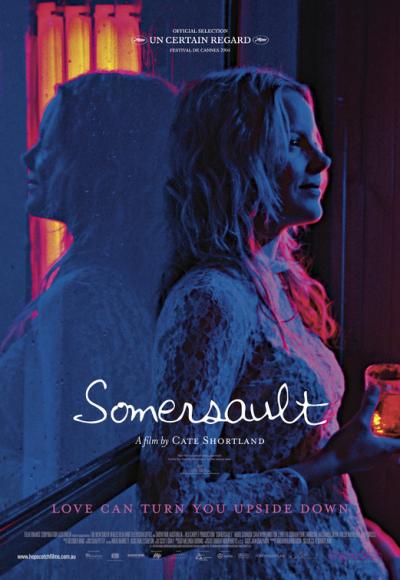 She looks happy. I bet only good things happen to her in this film

Somersault has garnered rave critical reviews, buzz at overseas film festivals, and an unprecedented 15 nominations for the upcoming AFI awards. A person could be forgiven for being under the impression that this would clearly have to be one of the truly greatest Australian films made of all time, yea verily. An audience member going in with such expectations of excellence is surely going to start setting fires or engaging in self-mutilation as a violent kind of protest when they're inevitably let down.

dir: M. Night Shyamalan
[img_assist|nid=974|title=This Village's people are much scarier than the ones in this movie|desc=|link=none|align=right|width=350|height=296]
Be careful what you wish for, because someone might just strap you to
a chair one day and jam it down your throat using a splintered chunk
of wood. In my last cinematic masterpiece of a review I made a big
issue about poorly directed hyper-efficient Hollywood movies where a
lack of vision results in editors constructing their projects as if
they're animation on a sequence of post-it notes that you have to
flick with your finger for it to make sense. Two second cuts and
jittery camera work abounding. At the complete opposite end of the
spectrum exist the films of M. Night Shyamalan, whose measured pacing,
and long, well-constructed shots you would presume exist as an
antidote to the current madness of strobe light cinema. But does that
necessarily mean they are better films? Or do you keep getting woken
up by your own snoring?

Dawn of the Dead

dir: Zack Snyder
[img_assist|nid=972|title=Zombies running? Who ever heard of something so absurd?|desc=|link=none|align=right|width=450|height=636]
The sheer abundance of zombie related material put out in the last few
years points to either a large group of movie industry types thinking
that zombie stuff is a goldmine, or a large audience out there that is
hungry, hungry for brains. In the last two years alone I can think of
a whole bunch of films that had zombies as the scourge staggering
open-mouthed towards Our Heroes, in a fashion incompetent enough to
generally have their heads blown off only at the most crucial or
comical moments.

Though many will point to 28 Days Later as the resurgence point, they
would be wrong. At least one zombie film has been coming out a year
since time immemorial; it's just that most of them were going straight
to video. It really restarted with the release, I'm not kidding, of
Resident Evil, where as anyone with the DVD can attest, not only did
Milla Jovovich show far more than she and God probably intended, but
it also began the inexorable march of the zombie legions back into our
multiplexes as well.