dir: John Carney
[img_assist|nid=775|title=Hi, how's it going?|desc=|link=none|align=right|width=400|height=260]
How many times are you likely to watch this flick, if at all? Once. How many times will you listen to the CD? Once. How many times will you hear the Oscar-winning song Falling Slowly that features in the film and is likely going to be used in every ad trying to sell everything from haemorrhoid creams to fighter jets and cheese-in-a-can? Probably dozens of times.

Once is a very simple, very unambitious flick that is nonetheless quite charming. It is billed as a romance, but really, it’s about two people who meet, sing and play some songs together, and that’s it. There’s really not much else to it.

The story, such as it is, looks at The Guy (Glen Hansard) who repairs vacuum cleaners in his dad’s shop. He also busks on the streets singing his own songs. In an amusing exchange to open proceedings, he spies a junkie who looks like he’s going to try to steal the change dropped on his guitar cover. When the junkie does what is expected of him, and The Guy has to chase him down, it seems like the junkie and the Guy know each other quite well.

How Much Do You Love Me? 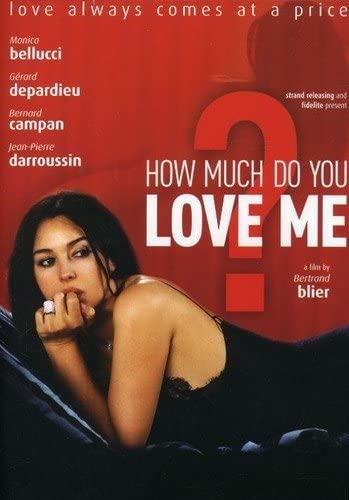 Sure, it's impossible not to like that, but the movie is still wretched

This film is terrible even by the standards of French cinema. I’m no Gallophobe, disliking the French or their cinema by any stretch of the imagination, but this flick is appalling according to any criteria that I can think to apply.

Look, it’s not the acting. The actors are, I’m sure, doing the best they can with the material. And many a French film possesses a certain arch or pretentious sensibility that would be ridiculed in flicks from any other culture. But here, the scripting, the plotting and the editing combine to produce an absolutely shithouse result that knows no borders.

It’s not unpleasant to watch for most of the time, with the sound and subtitles turned off. Any film that has Monica Bellucci in it has at least two good reasons to watch it, whether lingerie clad or not. And the great advantage that this film has over, say, Irreversible, is that the audience isn’t subjected to watching her being subjected to the most horrendous assault imaginable over a prolonged period of time.

But this film is still appalling. Even with Bellucci, and Gerard Depardieu, that giant of French cinema in more ways than one, in this flick, it’s still unwatchably stupid.

dir: Ang Lee
[img_assist|nid=943|title=Beautiful boys|desc=|link=none|align=right|width=449|height=301]
It’s strange that such a big deal is being made about this film. Don’t get me wrong, it’s beautifully shot, well-acted, with a touching, sad story to tell.

But it’s such a low-key story, regardless of all the controversy surrounding it. And let’s not skimp on the praise here, it’s utterly ridiculous that such subject matter can still get so many people’s girdles in a twist in this day and age.

Ennis Del Mar (Heath Ledger) and Jack Twist (Jake Gyllenhaal) work as shepherds in the mountain region of Wyoming one summer in 1963. They talk like Texans, and dress like the Marlboro Man, so I guess they must be cowboys. They’re really not cowboys, though. So those, like me, who were expecting two hours of gay cowboys eating pudding, will be disappointed. Instead of proving the old South Park gag about all arthouse films, they subverted it, the bastards.

Their job on the mountain is to let the sheep graze, and to protect them at night from coyotes and other predators. And though it be 1963, the place is still a pristine wilderness. As such, depicted in relatively modern times, the place has an air of unreality to it, as if it is some fabled realm, of nature unspoiled, where man doesn’t really belong. So two men, up there, all alone on Brokeback Mountain; cold nights, flowing whisky, sleeping in a tent together, what else would you expect, eh?

dir: Michael Winterbottom
[img_assist|nid=1216|title=Sex on the beach is not all it's cracked up to be|desc=|link=none|align=right|width=429|height=289]
The film is exactly 69 minutes long. It consists of a smattering of banal dialogue between two people, they also do some drugs, squabble a bit, and they go to some great gigs. They also fuck. They fuck a lot. The weird thing is, they really are having sex. We see it in all its messy glory.

dir: Richard Linklater
[img_assist|nid=986|title=Only in movies are people thinner ten years after they first met|desc=|link=none|align=right|width=400|height=327]
I'm not a fan, even remotely, of romantic movies. Romantic movies generally have the same effect on me intellectually as Draino would have on a human's gastrointestinal system upon consumption. I doubt anyone's going to be surprised by that. Hey, I'm not some stoic, repressed, unemotional automaton. I don't work in an abattoir nailgunning creatures in the head day in day out for a living or for fun; I haven't 'shut down' emotionally because of my second tour of duty in 'Nam where I put my hand in a pile of goo that used to be my best friend's face. I am, in short, a product of the current age, not overly apathetic about stuff, but not too interested in getting sweaty over anything either.

All in all, I am clearly not the demographic intended for anything explicitly shelved under the Romance section of the local franchise video rental chain. You know where I mean, be it your local Burstblocker or LeproZYDVD, where they have over fifty copies of the latest Adam Sandler / Drew Barrymore flick, and no copies of any films by Federico Fellini. Yeah, I know, I'm a snob when it comes to movies, so sue me.

dir: Wong Kar Wai
[img_assist|nid=964|title=In the Mood for Love Revisited|desc=|link=none|align=right|width=320|height=452]
2046 is a lush, beautifully filmed movie with an aching coldness at its heart. It’s a complementary film to In the Mood for Love, but it’s so much of a mutated yet ‘faithful’ continuation that calling it a sequel feels inaccurate.

In the Mood for Love was about two people clearly in love with each other trapped by circumstances and their apartments into never being together. 2046 has the male character, Chow Mo Wan (Tony Leung Chiu Wai) continue on his way whilst doing an autopsy on himself the whole time. It is essentially about how screwed up he is as a person now that he refuses to open his heart ever again after ‘losing’ Su Li Zhen (Maggie Cheung) from the first film.

So, even though he swans about with his cool pimp moustache and looks the dapper dandy, inside, his heart is dead. Women are in ready supply and close proximity, but he uses them solely for sex and keeps them a million miles away emotionally. The ones that want him repulse him, the ones that he thinks he might want, were he not an amputee from the result of dwelling permanently in the past, don’t want or care about him at all.

Eternal Sunshine of the Spotless Mind

dir: Sofia Coppolla
[img_assist|nid=1000|title=And yet I don't believe for a second that Bill and Scarlett even vaguely liked each other. Bill and Sofia, on the other hand...|desc=|link=none|align=right|width=400|height=300]
Considering how little press this film has received and the manner in which it has been criminally ignored, by critics, by audiences, by homeless people, I thought I'd do the greater community a service by bringing this film to the attention of the billions of people out there hunched over and trembling in the cold, shadowy vale of ignorance.

Rivalling only Mystic River in terms of overblown ejaculatory press over the last year, Lost in Translation has amazed many people by having achieved such incredible notoriety for what is essentially a low key, small scale film. I mean, it's a lovely little film, but the frenzy surrounding it leaves me utterly perplexed.

dir: Richard Curtis
[img_assist|nid=997|title=Actually, I hate this fucking film with the burning passion of a thousand dying suns|desc=|link=none|align=right|width=300|height=444]
This is a singular work of staggering banality. Now, that’s an achievement and a half. From the makers of such romantic classics as Four Weddings and a Funeral and Notting Hill to make a film that eclipses those in terms of superficiality and mawkish sentimentality takes a phenomenal amount of skill, money and enough ham to cover the Tower of London three times over in order to achieve their goals. And goddamn them, they get there in the end.

I hate to say it, but this 2 hour commercial for whatever the hell it is that director Richard Curtis is ineptly selling made me want to destroy Christmas forever. If anything, despite the clear intention set out in the movie’s title to be a concentrated explosion of goodwill and love towards all men and women, this film, I believe, has decreased the amount of love that was previously available in the world. If you are a person for whom there is no more love, for whatever you thought was the reason you could get no love in your life, this crappy flick is responsible.

dir: Barry Luhrmann
[img_assist|nid=1080|title=I would have preferred to look at this picture for two hours instead|desc=|link=none|align=right|width=337|height=450]
Moulin Rouge, the fourth in the Three Colours series, is the first to depart from the tried and true formula of having silly French people overact at the drop of a croissant. Instead, in another of his long list of genre bursting endeavours, Barry Luhrmann decided to shift the focus of his vision to the future. In this science fiction / horror crossover, Luhrmann paints a bleak yet colourful canvas of his chilling view of a post apocalyptic alternate future where the fabric of society has been discarded like a drunken bridesmaid's undies and people speak in a post literate language called "ham", obscuring all meaningful communication and leading to sorrow, loneliness and death.

The film begins at a time referred to as "1899", but astute viewers will note that this has nothing to do with actual earth history. On some newly colonised planet, a city called "Paris" cradles both our protagonists and the venue that the film takes its name from, the Moulin Rouge, or "Red Snapper", cunningly referring to the legendary Led Zeppelin groupie anecdote of the same name.