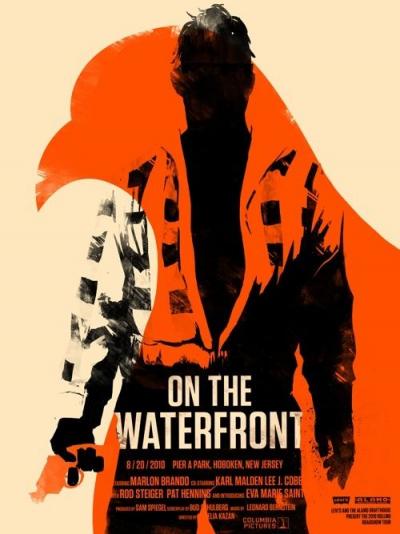 It’s a bloody shame that possessing too much knowledge makes it impossible to just talk about a great film and call it a great film. Either that, or you can put it down to arrogance, pretentiousness, or affected hipsterism. Whichever and whatever combination thereof that I’m afflicted with, I’m too aware of the history behind this picture to be able to blithely review it like it’s just any film.

Sure, it’s a film like any other. Although, it won a bunch of Academy awards, and it contains one of the greatest performances by Marlon Brando that you’ll ever see. And it casts a mournful eye over the waterfront upon which it is set, and the cowardice, greed and cruelty that conspires to render good men either dead or useless at the hands of a corrupt union.

And it’s directed by a man who made some great films, like this, Streetcar Named Desire, A Face in the Crowd, Splendor in the Grass, and Gentleman’s Agreement; films which I’m sure all the kids of today are big fans of and love to hear quoted in the latest emo and rap songs illegally downloaded onto their iPods.

But Elia Kazan also named names during the Communist witch hunt era, lending credibility and legitimacy to a process that should never have possessed a skerrick of either, and continued to work and live a happy, productive life after condemning others to blacklisting and misery.

For a man who received plenty of awards during his life, perhaps it might strike some as strange that he required honouring at the 2003 Oscars with a lifetime achievement award, where many of the crowd refused to applaud or even stand for him. Talented director, traitorous fiend, or both? 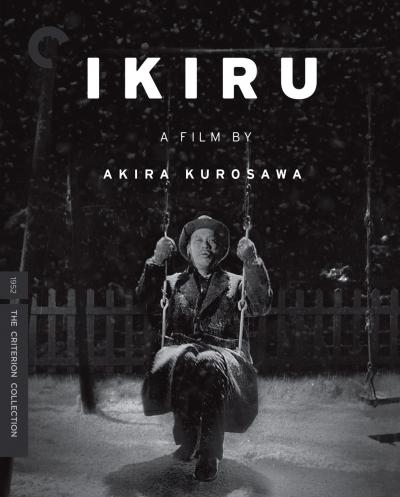 Old man take a look at my life, it's nothing like yours

An aged bureaucrat, entrenched in the job for thirty years, finds out he is dying. The pointless busy work he has juggled for the length of his career, the professional objective to help no-one and do nothing unless it falls within the narrow parameters of the job description, now no longer seems as wonderful a task as it used to.

He wonders what to do now that he no longer has uncertainty regarding his fate. He takes out some of the money he’s been squirreling away, to see what he’s been depriving himself of for so long. He doesn’t tell his annoying, selfish son what’s going on, since he’s a greedy and overbearing prat, and the son’s wife is a bit of a bitch as well.

He tries the whole ‘drinking and bitches’ routine, but finds he ultimately has no taste for either. He laments his wasted life, and the manner in which he has been more dead than alive since his wife’s death many decades ago. It hurts him that his son doesn’t love him as much as he loves his son, choosing not to remarry upon his wife’s death (when the son is still tiny) for the son’s benefit. Now all the son and his wife can do is berate the old man and pray for his death so they can get a hold of his money.

The film sounds like a laugh a minute, I know, but there’s more going on in the film than it trying to get you to slit your wrists. It does have a mournful tone in parts, elegiac throughout, but there is, in the end, a redemption of sorts for our hero, who’s anything but, really.

Watanabe (Takashi Shimura) is, until his diagnosis, the quintessential bureaucrat, surrounded by fortifications of paperwork, unhelpful to any that approach, only mindful of safeguarding his job and determined never to help the people who ask for his help. The irony is, of course, that he works for a division of local government called Public Affairs, which means his job is meant to be helping people living within his prefecture.

Helping people, of course, doesn’t interest him. As a recurrent element throughout the film, a group of poor women keep trying to get the bureaucrats to help them with a serious problem in their slum, but every desk sends them to a different desk so that the women, after traversing every room and floor in a large building, end up right back where they started.

Ah, the exquisite pointlessness and inefficiency of bureaucracy! You can only really appreciate the nuances of something like this if you’ve worked for the Beast directly. Sitting, as you would in the Beast’s belly, you’d know the peculiar feeling that eventually envelops all bureaucrats and renders them ineffectual as human beings. It’s this unwillingness to do anything, this resistance to helping people, and an Olympian disdain for other lowly humans which produces characters like the ones in this film. 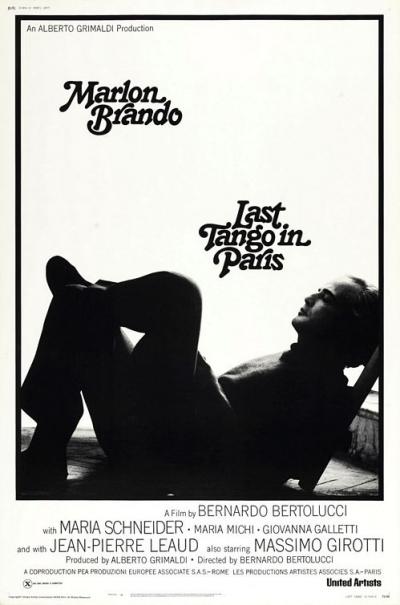 What happened to you, man? You used to be beautiful

Oh, my good gods do I loathe this film.

I find myself truly amazed that this film has such a vaunted reputation. Famous film critic Pauline Kael wrote a 6,000 word review practically calling it the death and rebirth of cinema. Other critics fell over themselves to praise Brando’s performance beyond the high heavens and to heap the shiniest and gaudiest superlatives that they could upon this film and its lead actor.

What the fuck were they snorting?

Brando may have been the greatest actor of his generation, but I find his entire performance, most of which is improvised, excruciating to listen to and behold. This is not acting, it's actoring: this is an actor doing whatever the hell he wants because he thinks he’s beyond being directed. Whether he’s saying whatever pops into his head, or smacking Maria Schneider in the head with a hair brush, he’s less of an actor than Jim Carrey is.

I mean that seriously. There’s only one genuine scene in the whole film. The most famous scene, from an acting point of view, is the one whether Brando’s alleged character Paul rails against his dead wife as she lies in state. He begins by cursing her out for the whore that she was, railing against her before he breaks down. It’s a powerful scene. I guess.

Everything else reeks of artificiality. It’s as artificial and false, unfeeling and unengaging as if the two main characters were computer generated or if they were acting in different rooms. These two characters are not in the same film, and I bought not a second of the two hour plus running time. I’ve heard that there was a four hour version when it was first released. I hear the US has been using it at Guantanamo Bay to get suspected terrorists to confess that they sniff girl’s bike seats or wear suspenders and stockings under their robes.

If you strapped me down and forced me to watch such a version, I’d be confessing each and every bad or nasty thing I’ve ever done in order to be set free. The credits would barely have started before I’d be spilling my PIN number, network passwords and the amount of times and quantity of money I stole from the church collection plate throughout the last financial year. Don't blame me, I have a yacht to pay off.

Paul (Brando) is an overacting guy in his mid forties whose French wife appears to have committed suicide. They lived together in a sleazy hotel she owned, being the same place she chose to pop her clogs in a spectacularly bloody fashion. 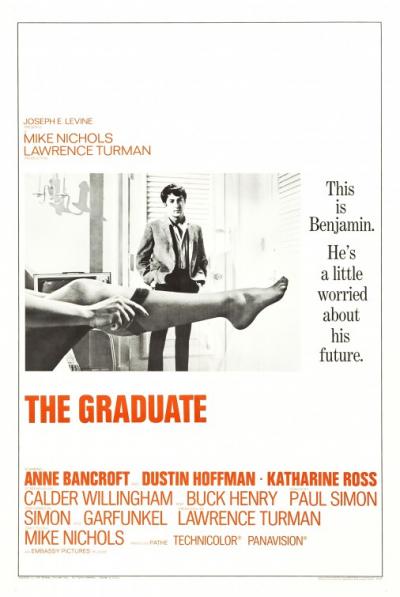 The most famous outstretched leg in all of American cinema

What a remarkably good film. I can’t believe it’s taken me this long to see it. Seeing it for the first time just recently (29//8/2007), I was struck by just how good this ‘classic’ flick from the 1960s really is. For once the link between reputation and quality actually coincides.

Certain phrases have become pop culture stalwarts like “Mrs Robinson, you’re trying to seduce me,” “Do you want me to seduce you?” and “Plastics!” said in that conspiratorial voice. And the soundtrack by undead folk troubadours Simon and Garfunkle is as well known and much lamented part of greatest hits commercial radio package played out daily across the globe.

Then of course there was the Lemonheads cover of Mrs Robinson which propelled the song and the flick back into the public consciousness many years after the fact. And it gave Evan Dando enough money to develop a really serious drug habit.

All these artefacts, cultural signifiers and signposts don’t alter a really significant fact: The Graduate is a funny and touching flick about an aimless guy who’s unsure of his place in the world.

Considering the era the flick was made and set in, it would have been easier to make Benjamin (Dustin Hoffman) a kind of beatnik or hippy to represent his dislocation from the people around him. They make him more of a Catcher in the Rye – Holden Caulfield type instead. Labelling him as such is a bit deceptive, but it aims at more of the gist of it to indicate that our main character is a chap apart.

He returns from college a feted man, surrounded by his parent’s friends all gagging to share with him their thoughts about what he should do about his life now. Surprisingly, none of these brilliant bits of wisdom and advice really resonate with him in the slightest, and he feels as aimless and uninterested in the contemporary world as possible.

There is someone who comes along with absolutely no desire to tell Benjamin what he should do with his life in the future. But she sure has ideas about what he should be doing right now. 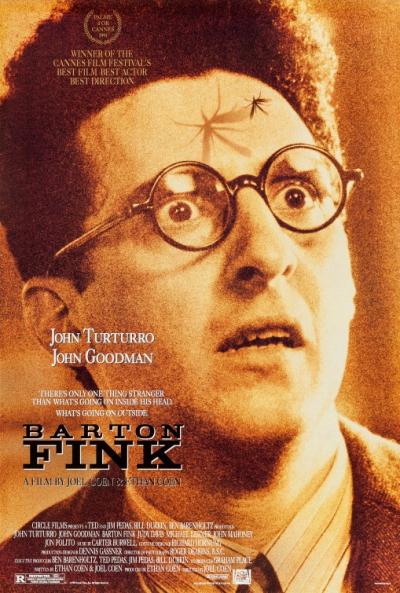 It’s hard not to view some of the films the Coen Brothers have been responsible for more as experiments than films. Their films thus far have generally been about films, on some level. Sure, they’ve got characters and plots and set pieces and crafty dialogue. But they are also almost always about Hollywood and movies.

I’m going to avoid rambling on about that theory too much, since I’m sure I’ve mentioned it at length in another Coen Brothers review found elsewhere on this illustrious site. All I will say is rarely is the link made so explicit as it is in Barton Fink, most of which is set in the Golden Age of Hollywood’s bright days prior to World War II.

Barton Fink (John Turturro) is a New York playwright who’s hit the big time. His most recent play is the toast of Broadway. Somehow, this translates to him being snapped up by contract to Capitol Pictures, and shipped out to Los Angeles to work as a screenwriter.

The head of the studio, an over excited Michael Lerner, continually praises both Fink and writers in general. He bellows out the phrase “The writer is KING at Capitol Pictures”, which is not likely to be true. Fink is told to write the script to a wrestling movie because he knows the poetry of the streets, which precludes him from working on westerns, biblical or any other kind of story.

The studio moves him into a hotel that, at first, looks pretty swanky. At least the lobby looks swanky. Chet (Steve Buscemi) is the ever helpful, and decidedly odd bellboy / concierge who seems to be the only staff member in this hellish hotel.

Fink’s room, over the course of the film, is in the process of decomposing before our very eyes. The walls themselves ooze a fetid liquid, and the wallpaper, looking like human skin overflowing with leprosy, sloughs off in sheets.

Fink tries to combat the decay with persistence and pins, to little avail. All the while, his progress before the typewriter is stunted before he’s barely begun. A rampant case of writer’s block has seized him by the balls and won’t let go.