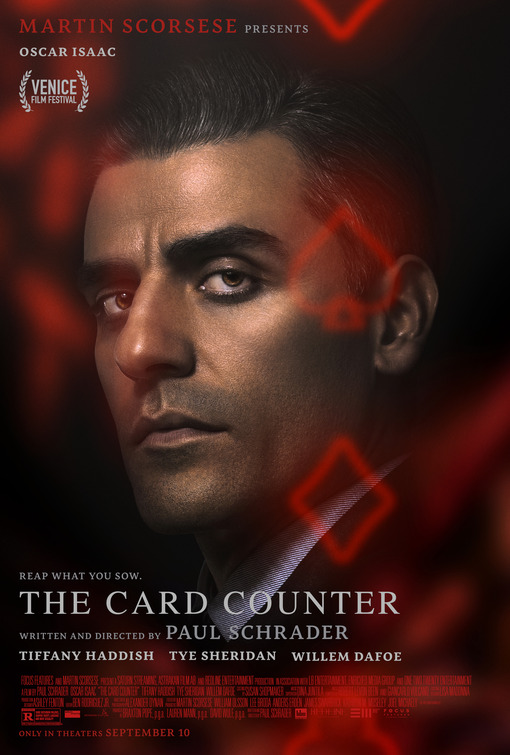 So broody and intense, you can fill up two hours with it

Yeesh. Like, I’m sure a lot of other directors fuck up the endings of their films, but holy fuck does this go off the rails.

Although, being honest, it’s not really on decent rails before it falls off of them and into a ravine abundant with mediocrity and yet somehow still empty.

It’s such a shame, because I love Oscar Isaac. He’s usually dependably great in what he does. He does okay for much of the flick, but the film feels so flimsy after a while, giving him a heavily weighted and freighted character who doesn’t really have anything to do and to whom nothing believable happens.

And then he flies back to his home planet, never to be seen or heard from again.

It’s that abrupt. Either they completely ran out of money or they just didn’t know how to end things.

That in itself would be fascinating, in terms of how you can run out of money when your budget is probably miniscule as it is. There are times when Isaac’s character is wearing what I’m pretty sure is Target brand clothing, and there’s no real story reason for it, so the times when he’s wearing decent clothing I’m assuming he’s wearing his own stuff.

There is something serious, something important the flick is trying to do, or at least it’s pretending it’s about serious and weighty subjects. The main character, who tells people his name is William Tell, is a very cold, very robotic person who counts cards at low rent casinos. He’s not trying to make a bundle; he’s just trying to make modest winnings, and then move on.

He doles out his story to us, the audience, by writing in a journal and then telling us things in voice over. His writing is neither profound nor overly revealing, and all it does is imply to us that this very shut down man still has thoughts percolating in that noggin of his.

The weight that he carries is that he was in the military, and was stationed at some place like Abu Ghraib where US personnel, contractors or otherwise, tortured and tormented people for intel, for revenge, for shits and giggles.

But I guess there’s the argument that torturers can also carry the burden of the trauma they inflicted. There are other flicks, even ones I’ve seen recently, which look at what impact execution has on people, not just the victims, but on society, including those who the state compels to end the lives of others. The Iranian flick I’m thinking of, There Is No Evil, was a brilliant and affecting examination of the topic.

The Card Counter isn’t even vaguely in the same ballpark, at least, not to me. William Tell was jailed for his crimes. He lives a life that seems strange to the observer, but we never really get a sense of why he lives like this, what it means to him, until a character sees one of the odd things he does, being, that he travels from cheap motel to cheap motel and brings his own sheets.

That bit makes perfect sense. But what he does is wrap those sheets around the furniture, and it’s not because of germophobia, which I would otherwise completely understand, but because he needs the space to be monochromatic, to perhaps make him feel like he’s back in jail.

Okay, so he doesn’t feel like he has paid enough for what he did, he needs to suffer more.

He randomly bumps into a young guy who is the son of one of the torturers he served with. The young guy, played by Tye Sheridan, is young, dumb and not really doing anything with his life. This is important to Tell because now he has someone to feel guilty directly to (it’s never even remotely clear psychologically why), and to whom he feels like, if he just helps him in some way, it could make up for the awful things he did during the war.

I’m guessing this isn’t the first time a character in a movie has had guilt about something and tries to do something else in order to make up for it. Also, it’s not the first time a war veteran, even one who was a torturer, has returned from a war damaged on the inside even if intact physically.

Taxi Driver does have, after all, a screenplay written by Schrader, in which Travis Bickle returns from the Vietnam War unsure what to do with himself, so he just fucks about for a couple of hours of our time driving a cab and eventually killing a whole bunch of people. I guess there are deep and profound ideas at play there and psychological motivations behind everyone’s actions in the flick, but I honestly have never liked Taxi Driver. I can appreciate it entirely on an aesthetic level, maybe even as a character study of a mass murderer, but everything it tries to say about people or society is a dead loss to me.

This has a similarly isolated individual who’s a bit odd and who isn’t really sure about whether he wants to be alive or not, who does something extreme in the end for ill-defined and psychologically nebulous reasons, and then that’s it. It doesn’t have the benefit of a Bernard Herrmann score, or Scorsese’s direction or Marcia Lucas’s exquisite editing , or scenes with Cybill Shepherd and Albert Brooks divinely bantering like there’s no tomorrow.

No, this has Oscar Isaac playing a painfully controlled individual who does nothing but play cards. He plays well, but the film doesn’t care if he wins or loses. He doesn’t gamble because the Mob is going to knee cap him, or because he has a horrific addiction – he plays so that there is something for him to do.

But. And this is a really big but and I cannot lie, he gambles and stuff, as per usual, but he’s doing it for the “kid” now, who doesn’t give a shit one way or another.

The “Kid”, who tells people his name is “Kirk” but with a “C” (trying figuring that out), is the least convincing character I’ve seen in anything. I have seen the same actor in roles when he was even younger, being good, so I have to lay the blame at the appalling direction and at the costuming that makes him look like a brainless hillbilly. His dialogue and actions don’t paint a different picture either.

The kid has no direction or intentions for his own future, but he does have a plan, such as it is. He wants to kidnap and torture and kill the guy who trained his father and Tell to become torturers.

As plans go, well, it’s pretty fucking dumb. He wants to enlist Tell’s help in his scheme, but Tell tells him that it’s not a very good plan. That’s why Tell hopes if he makes some money and pays off Kirk with a C’s debts, then all will be right in the world.

Enter La Linda (Tiffany Haddish), who is from a completely different film universe from the one this film occurs in. She is a welcome presence, as in she brings a level of life to her scenes which is absent entirely from the rest of the flick. She is not in it much, but enough to remind us that life still exists.

She bankrolls decent card players, picking up on the fact that Tell can count cards just from observing him play, and wants to bring him into her stable. He’s not interested until he decides to help The Kid. Then, he does want her to bankroll him.

None of these details matter at all. The story doesn’t care about those details. But it does lead to the first, most baffling scene where Tell says to La Linda “I like this, this friendship is good.”

Um, no. Up to that moment you’d spoken four words to each other. That they will hook up later in the flick stems from nothing other than “I say it shall be so” on the director’s part. Two characters have ever rarely had less going on that these two onscreen at the same time. You need it, I guess, for the very last scene to make any sense, but I put it to you that the last scene makes no fucking sense either.

It’s profoundly disappointing. The ending comes out of nowhere, arising from dumb people doing dumb things without any sense of story or motivation. If you argue that the dumb “kid” does the dumb, expected thing because he’s dumb, well, I can’t argue with rock solid logic like that. But what Tell does, well, that’s somehow even dumber, and it’s carried out, offscreen, in such a perfunctory and risible way that I fucking laughed, and I’m not sure that was the intention. It’s meant to be a serious, weighty final act of, I dunno, divine retribution or something, but the character it’s done to never even exists in the movie. We see him and his terrible moustache (Willem Dafoe, who’s been in his share of bad films in general and bad Paul Schrader films specifically), but the story never makes any case that he is any worse, any more deserving of retribution than Kirk with a C or William Tell.

I really don’t get the point of the flick or the character. So if it was a character study, it abandons the stuff that makes the character interesting, and if it was a redemptive crime thriller it lacked redemption, crime or any kind of thrills. The characters never really cohere or work that well together, and they’re better off apart, which I’m sure La Linda realises now. The script has her intuiting all these details about Tell so that he doesn’t have to talk about himself, but never explains why she sticks around.

Yeah, nah, this was a big disappointment for me.

--
“Is this how you live?” – that’s pretty rich coming from a homeless guy with no furniture of his own to wrap in sheets - The Card Counter