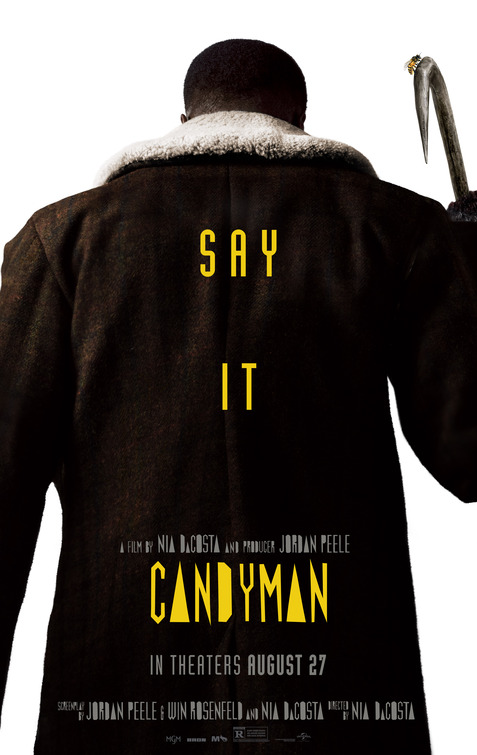 Don't say his name, he just wants the attention so he can
murderise more people

Such a shame. I’m not angry or sad, just a bit disappointed.

I utterly adore the original Candyman. I think it’s one of the classic horror flicks of the era, and a classic in its own right. Seriously! I’m not even kidding or being facetious, or calling it a guilty pleasure or anything like that.

And I acknowledge that there are problematic elements to it, not least of which is the fact that it was based on a story by (pasty) British horror writer Clive Barker, and directed by (pasty) British director Bernard Rose, and that despite being set in Chicago at notorious projects / public housing known as Cabrini-Green, the main character was (pasty) Virginia Madsen.

There’s nothing wrong with being pasty. There are a lot of things wrong with being a pastie, or even a pastry, because you will get eaten, and I’ve never thought pasties are that great. In fact, I have always loathed them. But that’s not important right now; what is important is that Virginia Madsen was pretty great in Candyman., and has always been pretty great in everything she’s ever done.

But a story like this… remade today, it can’t be centered around a WASP academic trying to track down an urban myth and finding horror, brutality and death at the hands of a supernatural spectre.

Instead it’s centered around an African-American couple who live in the hoity toity kinds of bougie apartments that have replaced the demolished towers of Cabrini Green with loft refurbs and tasteful copper lighting. Although… holy fuck, they’re not really that different from a middle class academic with research and tenure on her mind.

If anything, they’re somehow even worse. Anthony (Yahya Abdul-Mateen II) and Brianna (Teyonah Paris) are a painter and a gallery director respectively. Ew. Gross. We’ve replaced the pretentiousness of academia with the even somehow worse pretentiousness of the art scene. They struggle for relevance in an art world that is only even barely polite to their faces. Just in case you were wondering, yes, rich white people in the art world can be just as racist as your man down the pub who’s just asking questions and going to anti-lockdown rallies and doing their own research about virus treatments.

The telling phrase is: “They love what we do. They don’t love us.”

Pithy and to the point. The “They” is America, and the “what we do” is everything in the fields of sports and athletic achievement and music and movies and books and academia and civil rights, which still doesn’t translate to being seen as fully human.

The stories, the myths of what happened at Cabrini-Green 30 years ago, as in, what happened in the 1992 film, are resurrected and distorted here. Helen (the Virginia Madsen character) is a murderer who tried to sacrifice a baby in a bonfire, but the brave deadbeats of Cabrini-Green saved the baby and saw her off. We see this play out as shadow puppetry, which is a pretty neat and innovative idea. Probably saved a bunch of money too, and it looks great. I’m a sucker for shadow puppets.

Thing is, those of us who saw the original flick know the story as told by Brianna’s brother, isn’t accurate. This inspires Anthony, the artist, to find out more about what happened, and what’s all this Candyman bullshit he keeps hearing about? His reason is because he wants something to paint, something to show, something to sell at the gallery. It’s not because he’s deeply committed to storytelling or the plight of those who came before him.

He finds an old timer (Colman Domingo) near where Cabrini-Green used to be, who’s happy (if happy is the right word) to tell all sorts of stories about the legend of the Candyman, and of the legacy of police brutality in this part of Chicago. Why he himself recalls watching the police beat a man to death just for being black, having a hook for a hand, and for handing candy out to children.

It’s strange. There is apparently no shortage of instances where police have killed unarmed African-American people without cause and without a reason other than not seeing Black people as worthy of life. Well, the Candyman is here to return the favour both randomly (whenever anyone says his name five times in a mirror) and as some kind of spirit of vengeance to try and emphasise that Black Lives should Matter as well.

It’s…something of a muddled point. I don’t mean that I don’t get the point. Black Lives should certainly matter enough to the powers that be that when those lives are violently ended by cops or the State, people shouldn’t get to just shrug their shoulders, mutter “thoughts and prayers” or “they had it coming” and then go on sipping their fucking lattes.

Candyman already has his brutal origin story, of being Daniel Robitaille, a painter who falls in love with a woman he’s commissioned to paint, and is lynched for it. The mob deliver unto him a painful and horrific death. There’s honey and bees involved. And a hook or something.

He was a tragic figure, a monstrous one, but I think there was at least the approach in the first flick to make him something like the more romantic, charismatic versions of the Dracula story. This was meant to be an African-American gothic horror story, complete with a replayed romance with someone who’s pretty much the Mina Harker of that story.

The problem I have with the film is not that it tries to have Candyman be both a gothic tragedy and a political allegory for the legacy of police brutality, and successive American governments wanting black lives to not matter that much. I get that. I get how important it is, this current moment, to fight for the ideas that will change enough people’s minds such that the veneer of white supremacy that persists across the States, across Britain, Europe and Australia is mutilated, torn and destroyed like one of Candyman’s victims.

It’s just that, I don’t know how well it works within the confines of this story. Anthony gets stung by a bee, and his body starts transforming, and it’s a gross bit of body horror, but he becomes less interesting the longer the movie goes on. It even turns out he’s being set up to be killed by someone who wants to somehow bring Candyman through the mirror so that he’s physically manifested in reality, where he can, I dunno, kill all the cops and racists?

But he was already killing whoever said his name in the mirror five times! Does coming through the mirror mean he gets to kill people who didn’t say his name as well?

Wait, so now he gets to kill everyone who doesn’t say his name?

My point is Anthony has zero agency in any of this. He has no conversation, supernatural or otherwise, with Candyman. There’s no devil’s bargain, there’s no competing potential paths, there’s no choice. Characters don’t always have choices in horror flicks. You could even argue that in the genre, the only person that seems to get to make choices is the villain, or the last person standing. Here, everyone is being played, and it’s not even by the Candyman.

For me to grasp what the intention is here, it’s that the person orchestrating this wants more African-American people to be unjustly murdered by the cops so as to join with the Candyman as some kind of vengeful hive of souls wrecking vengeance on anyone with a mirror? That’s a lot of trauma you’re carrying around there, buddy.

I’m making it sound messy and all over the place, and that’s not what the flick is like at all. It’s meticulously constructed, perfectly composed, artfully and cleanly designed in every scene, with a careful and calculated score. I mostly found it cold and clinical, and I feel like a lot of its powerful ideas aren’t well integrated into the story it wants to tell. All the same I respect where they were going with it, I have to respect the choices they make given the last, oh I dunno, 400 years or so of American history.

And I have to accept that I’m not the only person in the audience for the filmmakers, and that they’re telling the story they want to a lot more people than me, and that includes a large African-American audience thirsting to see how it is represented on the big screen, and how the intergenerational traumas, and the recent traumas, are represented, given shape, and bring some sense of resolution or catharsis.

It’s just…that’s not my Candyman. Tony Todd does make a fleeting (digital) appearance towards the end, and he’s my Candyman, definitely, but all I could think of is how much I want to watch the 1992 flick again. Maybe this flick will grow on me over time, but it’s already occupying a different part of the landfill that is my memory. Where I wanted visceral, I received a carefully composed thesis argument; where I wanted emotional stakes, like people trying to not see their loved ones be killed, I got that none of the characters really mattered except for Anthony; where I wanted terrifying visuals and grand / gothic design, I got scenes that looked like they were straight out of Grand Designs.

You can’t always get what you want. Wanting is the problem. I should have known that as a Buddhist.

6 times I honestly still would never say that name in the mirror ever, just in case, out of 10

--
“Tell everyone.” – but then more people won’t watch the film - Candyman