This is Not a Burial, It's a Resurrection 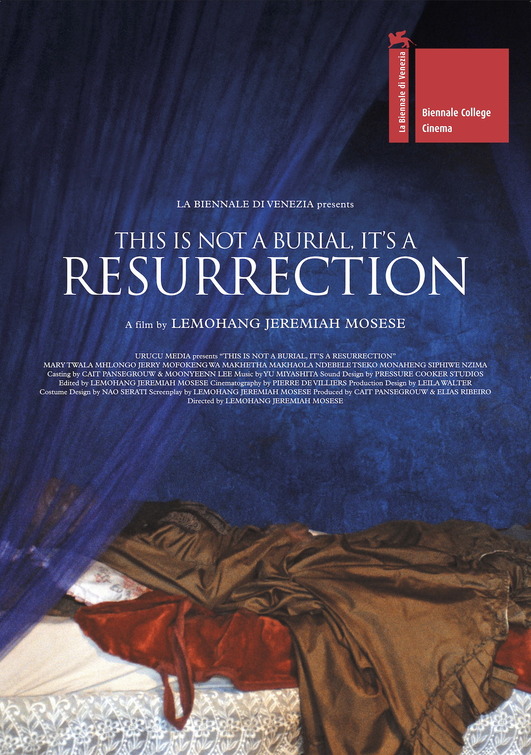 Why can't it be both, when it's more likely to be neither?

People live and do stuff in places you’ve never heard of and never imagined. Films are a reminder of that fact, occasionally. This is also the exact kind of flick I used to go to the Melbourne International Film Festival to see – something you’d never get anywhere else. And since this year’s festival, like last years, is completely digital and online, I thought I’d avail myself of some of its treasures.

This is Not a Burial, It's a Resurrection is probably the first film from Lesotho that you may have heard of. I can’t recall ever seeing another film made or set there. And, for some people, this could be the first time they’ve heard of a place called Lesotho.

I’m not pretending I’m a geography nerd, but I have heard of the place before. It’s entirely enclosed by South Africa, but it’s its own nation, or kingdom or something. Unlike the Vatican it doesn’t have a pope, but it probably has a king, which is like a pope, just less preachy.

And, above all else, she refuses.

Mantoa (Mary Twala, who died soon after making the film, which is surprisingly fitting) has not lived an easy life. She is old, and has lost husband, sons, daughters and even grandchildren to death. She had a son left, and she waits for him to return home just before Christmas, from the mines where he works, but we never get to meet him, for he is now dead, too.

He was the last thread connecting her to the world. The consolations of pious words from the local priest, the support of the other villagers don’t really give her anything. She has, in her view, nothing left to live for. So she puts on her fanciest dress, and waits for Death.

Death refuses to take her, in a final irony. So she waits, and waits, with nothing to do.

The village chief, who, unsurprisingly, is a large, well-fed, comfortable-looking man surrounded by people who look like they’ve been starving most of their lives, tells everyone that the government will soon be flooding the valley in which they live; the valley in which their dead are buried. That they will have to leave the only homes they have ever known, and move to the city, and they’re not going to get a cent for their troubles, because they never owned the land they lived on, because it was the king’s land anyway.

Ah, progress. For the good of the nation, for progress to happen, people’s lives have to be erased, to make way for the new. One of Mantoa’s neighbours speaks of something his father once said about progress: Whenever man says the word, they point an accusatory finger at Nature, claiming that the only way forward is through dominating it.

The father had been made to cut down a forest to clear a path for a road, and that was the end of those trees. So there’s a road, but from then on no trees for all the villagers’ tree-related needs, which one could assume would be many.

Only Mantoa says no. She refuses to go along with any of this, and she has nothing to lose anyway. She patiently tries to explain to an official that she wants to stop what’s about to go ahead, and she is told to write a letter, and put it in the complaints box, where it will be ignored by the authorities.

The rest of the village only occasionally agrees with her. Sometimes they sing along with her, sometimes they seem like they’re going to try to do something about it, or rise up in some kind of defiance.

But that’s not this film. She is an 80 year old woman. She has practically nothing to her name, and even that will be taken from her. All she has are a home built by her husband, and that’s going to go up in smoke, and the clothes on her back.

She tries to get a local undertaker to dig her a grave, and he regards this with horror – it is a sin to do such a thing. Well, fuck it, she’s going to very slowly and very painfully dig herself a grave to be with her family, herself.

It is very hard to talk about what this film is about, or how it is about it, because it’s really very snapshot, very quiet, and rarely about anything that’s happening onscreen. A lot of the film is just observing Mantoa’s post-having given up on life routines, and they’re not that fascinating. A storyteller is telling us all the things Mantoa herself isn’t saying, because for much of the film she is silent.

That storyteller is a trip and a half. He’ll say a bunch of lines, and then put this weird instrument to his lips, that looks like a stick with a tiny metal bit to it, make a bit of strange music for a while, and then keep speaking. It’s haunting and frustrating and, forgive my cultural insensitivity and ignorance, but it’s kinda exhausting, in a good way, I guess? This is not conventional storytelling, at least not cinematically speaking.

When Mantoa does talk, it’s powerful, strangled and uncomfortable. Her unwillingness to bend or go along with anything alienates her from the other villagers, and from those who would try to bring her comfort. She attacks the weak local priest the most, pointing out to him that his wife died in vain, and that grief, all grief, all their suffering, is pointless. And he has no comeback.

When her house is burned down, we don’t know at first if it is by accident, to add insult to injury, or whether it’s because she’s rejected God. It eventually becomes obvious that there’s a far more mundane explanation, being someone irritated with her opposition to the dam, but she doesn’t seem to care much. The shot where she sits next to the remnants of her bed, as she is slowly surrounded by sheep, is an incredible one.

We see the people associated with the dam, with the government, or with progress, in the distance wearing yellow coveralls and helmets, always out of focus. Characters carry on conversations or talk about wildflowers or the mines in the mountains, and you’ll see these figures in the background, doing their thing. Some forces you just can’t tackle head on.

Or even take them on any other way. I confess to being a bit baffled by this movie. Mantoa wants nothing else, other than to die, and even that is denied to her. She wishes to stop the dam that will flood the graves of her beloveds, and that isn’t stopped. She wants to stop the villagers being displaced, and that doesn’t happen. She maybe gets her primary wish right at the end, and even that is left ambiguous.

But we see the horrified, inspired look in a child’s eyes who views Mantoa’s fate, a child referred to as Daughter of Nobody, and we are told that she will be the one who will carry out the fire of Mantoa’s opposition, and that she will do something to oppose the forces of post-colonialism, corporate exploitation, I dunno, hydroelectric power?

Which is why it’s a resurrection. If so, then, why didn’t we see that story? Because despite the protestations of the title, this very much is a burial, it’s just a very slow one that takes 100 or so minutes of screentime. It’s amazingly shot, but on film stock that makes much of what happens outdoors look like faded photographs from the 1970s. The musical score is surreal and mystical, despite the flick itself being extraordinarily prosaic.

It is a burial, because there are no resurrections, no eternal rewards, no miracles. No benevolent deity is looking out for Mantoa, or for her people, and no interventionist gods or Fate or some other force steps in to change the outcome. It’s a reminder, as if we needed it, that the powerless are powerless, and remain eternally so, and if we are regarded at all by the cosmos, it is with cold indifference.

Fucking hell, like we needed to be told again.

7 times This Is Not a Burial, It's a Resurrection isn’t going to do much for Lesotho tourism out of 10

--
“Gather around, little children, cheer up. For this is not a death march, nor a burial. This is a resurrection.” – there you go again, lying outright to the kids - This is Not a Burial, It's a Resurrection