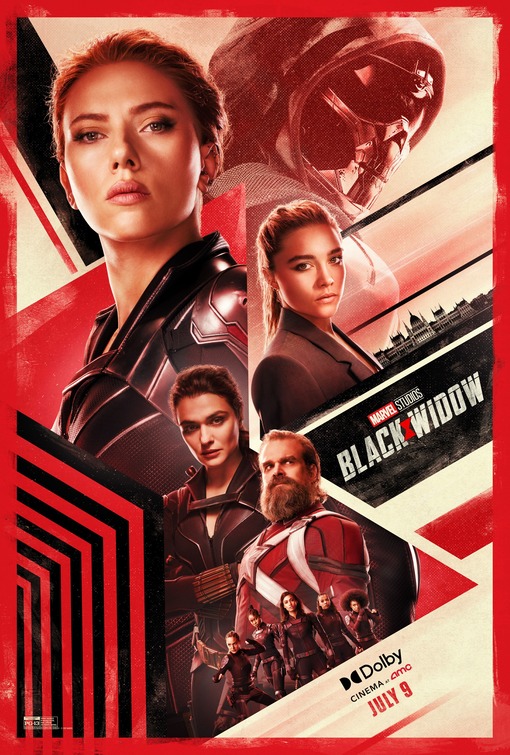 Family that kill evil misogynists together stay together

I know this sounds weird, but the reason I was excited when I heard about this film being made was the fact that Cate Shortland, Australia’s Own Cate Shortland, would be directing.

You don’t know who Cate Shortland is? She made Somersault way back in the day, and that was a pretty good moody Australian film (one of the few). I’m sure she’s done a bunch of stuff since then, but that’s what I remember her for. She might be a strange choice for an action flick, but I guess they wanted a cis female director for a film pretending to make up the difference with the 20-plus Marvel films in which women mostly played supporting characters, and the now 2 that had female protagonists.

As well there’s this explicitly “smashing the patriarchy” part of the plot which I wholeheartedly support, and if you didn’t have a female director directing it, you’d accuse whoever made it of probably being a Polanski-Weinstein in simp’s clothing.

For all that Scarlett Johansson has done in these movies as someone who doesn’t even have superpowers, this being the 8th time she’s strapped on the outfit, making her the central character doesn’t entirely work here, because she’s the least interesting part of this story. The villain is, like, not interesting at all either, though he is diabolical in his horrible treatment of women, but the interesting characters are really everyone else except Black Widow.

There is a flashback set in the 1990s that opens the film, showing a family going about their general daily American apple pie bullshit, until they bolt from the house and desperately try to get to a plane and fly out of the States, presumably, as they are chased by government types who don’t look like they have any problem shooting children.

The children are little Natasha and her little “sister” Yelena (eventually played by the great Florence Pugh), and the parents are Alexei (David Harbour) and Melina (Rachel Weisz), and though they look like the perfect family, they are all evil Soviet spies! Even the children! Especially the children!

They end up in Cuba, and, naturally, since they were all actors, they are separated. From there we are to presume, overly a deathly version of Smells Like Teen Spirit, that Natasha and Yelena are separated, but both turned into vicious assassins by the jerk who takes them from Cuba, being Dreykov (Ray Winstone) at some place called The Red Room. It would have sounded so much cooler in Russian: Krasnaya Komnata! That wouldn’t have been that hard to say! They say plenty of other stuff in Russian, so why not that?

Ray Winstone has been downright terrifying in films, menacing, monstrous, malevolent etc. He seemed a bit bored here, like maybe it was all a bit too silly for him, and I can’t say he’s wrong. Dreykov controls all the Black Widows, like, I guess literally mind controls them and they do awful stuff around the world until they can’t kill anymore, and then they’re forced to kill themselves.

That some nasty patriarchal bullshit right there.

Yelena, a loyal Widow, is trying to kill a Widow who has been deemed a traitor. Just as she’s doing the messy work of ending her, the other traitor breaks a vial with a chemical in it, which instantly makes Yelena freak the fuck out at what she’s just been doing.

Because, honestly, what a terrible line of work to be doing. Anyway, her instant regrets are nothing compared to the realisation that she doesn’t have to obey The Man, or any man, anymore. At the time when this seems to be happening, her former “sister”, who she resents / envies / adores in the way of younger sisters, is wanted by the authorities because of not wanting to sign a document, and she thinks “maybe I should send these glowing red tubes by Express Post straight to her at some place?”

Honestly, that’s what happened. I don’t just mean that she sends these things in the mail. I mean, I’m misrepresenting things slightly, in that Natasha did actually sign the Sokovia Accords in Civil War, and side with the fascists within the Avengers, but then she changed her mind and sided with, I dunno, the other guys, before the end, the ones who wanted to support Captain America and his former boyfriend The Winter Soldier.

It’s hard to keep track of every nonsense thing that’s happened in all these movies. It is strange to think of this flick as being a period piece. It ultimately doesn’t matter that much, other than giving Natasha / Scarlett a send off, a retirement party with a novelty sized card and some joke gifts, and probably the last massive payday of her life, and clearing the way for someone else to take Black Widow’s place.

No, it shouldn’t be me, but thanks for being polite. I wouldn’t look very flash in any of those outfits. Tight clothing is not my jam.

Because of the necessary elaboration on Natasha’s origins, it needs a bigger cast of characters to support her, because she’s not really a character that has that much going on. It helps that Yelena is snarky and just as adept as Natasha is at punching, kicking, shooting or stabbing people.

But really, as great as Florence Pugh is in this, same way that she’s awesome in everything she does, I really loved the two “parents” here. Rachel Weisz has been great in bunches of things, but she plays the role in an understated way, beautifully, as the scientist who created the mind control stuff in the first place. David Harbour, as Alexei, or the Red Guardian, does not play the role in an understated manner. At all. If anything he overacts so much that he unbalances the movie and makes it seem a bit funner than it has any right to seem. When David Harbour is on point, he is great, but other times, like in that last season of Stranger Things where he was starting to think he was it and a bit and could now just yell every line of dialogue from now on, it did not go well.

He is fine as this bellowing lunatic Red Guardian, the Soviet Socialist Republic’s answer to Captain America, who never even got to meet the guy, and who was sent to the gulag because he was an embarrassment to the collapsed evil empire. The idea of him chilling in an icy prison arm wrestling people for smokes or more tattoos is pretty funny and pretty depressing as well. He is good at playing these larger than life characters, even in flicks where every character is larger than life.

It's that dynamic and those scenes between Natasha, Yelena, Melina and Alexei that sell the film entirely. For an action flick, I know it seems strange to say, but the vast majority of it seems so superfluous, especially at first. But after we see the “family” together again, and spend time with them and their ridiculous antics, there seems to be more of a point to everything.

And, most importantly, they’re funny together. The sisters fight with snark and shade, the mother who prepared them too well for what would come in their agent training can still wound with a word, and all gang up on Alexei and mock his weight and overall ridiculousness. And they all keep saying that they know they weren’t a real family, but it was the only family any of them ever knew.

This is all good stuff, even if it seems like clichés. Every time any of them get in a room together someone whips out a bottle of vodka and forces everyone to drink. I don’t think that’s how all Russian people act at like 10 in the morning, but it’s seen as such a reasonable cliché I guess we’re just meant to accept that that’s what’s going to happen when four Russian spies hang out again after decades apart.

It’s almost a shame that the family fun and frivolity has to be interrupted with attacks by the Widows and another angry looking robot called Taskmaster.

No, it’s not, I don’t think Greg Davies or his side-kick Alex Horne, it’s the classic C-list Marvel villain who can perfectly mimic the fighting styles of anyone they observe. Taskmaster doesn’t add much to this flick, even as they tie Taskmaster’s “origin” to something Natasha did in her incredible desire to murder Dreykov once and for all.

When I think of what Cate Shortland made in her first film, and what she’s done subsequently, and when I think of her working within the Marvel / Disney production line, it’s hard to know what parts are “her” and what parts are just so much a part of the process that anyone could nod their head or approve a particular CGI explosion or fight scene and it wouldn’t make a lick of difference. It’s my assumption that “obviously” the scenes with the family dynamics or the cheesy sibling rivalry are where her talents as a director shine, but I don’t know that it’s really the case. It manages to feel very different from most of the other Marvel movies, and that stands as something of an achievement, even when it reverts to type by the end and a giant floating thing has to be blown up and come crashing back to Earth, like the end of almost every action flick, in order for it to slot in with everything else.

I really enjoyed it, and, honestly, let the character go now. Yelena doesn’t have to be “the” new Black Widow, she and her fake parents can just be awesome without the links to the past, gatecrashing fundraisers or punching people at Trump rallies. The post-credit sequence clearly implies there are plans afoot for some kind of ‘evil’ version of the Avengers, with Yelena as one of them (and, presumably, the pseudo-Captain America from Falcon and the Winter Soldier, since “Val” (Julia Louis-Dreyfuss) recruited him towards the end of that series as well), but I think they should just make a family sitcom crossed with The Americans all over again about their 3 years in Ohio instead. Going to Halloween, shooting capitalists in their pudgy faces, stealing nuclear secrets, going to Sadie Hawkins dances, the whole kit and caboodle. And you could even do it with the voiceover from The Wonder Years, except with cripplingly heavy Russian accent.

That would be fun. This is mostly fun when the fam are together, not as much when they’re not. Black Widow, despite being a solo effort, is best enjoyed when the band is back together.

7 times Scarlett Johansson was probably too good for these movies, but you can say that about almost everyone in these films out of 10