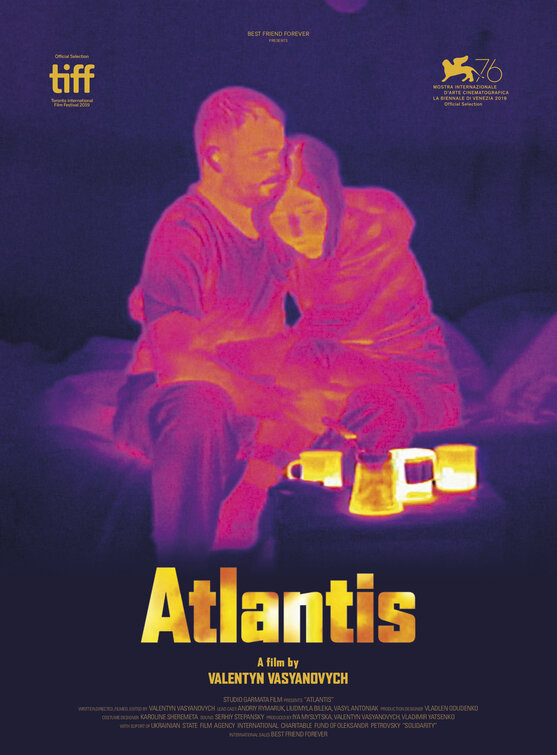 The bleakest place in the world, but at least they
have each other

Such a sad, strange, serious film... about something that hasn’t happened yet.

I mean, the conflict this alludes to definitely happened. Russian forces pretending to be Ukrainian separatists took over whole swathes of Crimea and what’s called the Donbas region, and around 13,000 people have been killed since 2014, which is a lot of people.

A lot of people. The conceit of this flick is that the ‘conflict’ was worse, and went for way longer, and the dead are at peace, but the living are the walking wounded.

The entire film consists of 28 sequences or shots. Most of the time the camera is static, sitting in one place, unmoving.

The film opens with just such a static shot: overhead, thermal imagery, of someone digging a grave. Someone else is dragged to the hole, beaten brutally and then buried. We see the whole thing from go to whoa. It’s not a pleasant way to start things.

We don’t know if it’s a Russian soldier or paramilitary, or Ukrainian, but it doesn’t matter, in the sense that whoever it’s happening to, it’s pretty horrible, whatever their ethnicity or identity.

Set in 2025, two veterans of the conflict, Sergey and Ivan (Adriy Rymaruk & Vasyl Antoniak) are not living their best lives. The two chaps set up metal targets in the snow and, for fun(?) shoot at the targets while screaming abuse at each other and making it difficult for each other to fulfil challenges set by the other. After many minutes of this, after taking things a bit far, Ivan shoots Sergey in the chest, laying him out.

They’re both wearing bulletproof vests, but it’s still not how friends should treat friends. Both of them are clearly not in a good place mentally, though we’re never told or shown as to why. It’s not some specific event – it’s just the accumulation of what happened, all the horrors of war, that don’t end just because there’s a ceasefire.

On top of that, these veterans are not well regarded by their fellow Ukrainians. They blame these soldiers either for the war itself, the fact that they fought for so long with nothing to show for it, or that it’s their fault they didn’t win.

The place where they work, a foundry, is so bleak it looked literally like something out of Nineteen Eighty Four, as in the film version from the 1980s. If shit wasn’t bad enough at the foundry, where the other workers hate them, they also get a heartwarming lecture from the foreman as to how they’ll be closing now thanks to their American owners, thanks for all your hard work you bloody peasants - no there won’t be severance cheques.

Ivan stares into a smelting cauldron, from way upon high, for a long, long, long fucking time, and does pretty much what you’d expect him to do.

Which is followed by us watching a long sequence of Sergey tearing a room apart; what crappy furniture and stuff that he had, well, now he has less of it.

He finds work transporting water in a truck – a commodity in short supply after the war has devastated the nation, but he is constantly being diverted on his travels.

One such diversion involves helping out people transporting corpses, skeletons, whose truck has broken down. They are volunteers, seeking to at least identify people, perhaps give their families or loved ones closure, but if nothing else to record who they were and how they were found.

Autopsies are conducted, details are sought and recorded, by people speaking in dispassionate and bureaucratic tones. Sergey is able to shed some light on one of the bodies found, explaining why they would have been made to swallow bullets whole.

He meets one of the other volunteers, Katya (Liudmyla Bileka), and decides that helping them with their task is of more importance than driving water around like it deserves to be chauffeur-driven.

Though transporting water has its virtues. We see him improvise with the bucket from a bulldozer, throwing some wood underneath it and starting a fire, and pouring a bunch of water for a hot bath in a forbidding landscape.

It’s a long scene – they’re all long scenes. This kind of cinema and cinematography is not for everyone. We have been unfortunately trained to think a scene should change, an angle, a vantage point, every time we blink our eyes. Some directors and editors will literally have an edit every three seconds or so. Some directors, like Baz Luhrman probably think 3 seconds is an eternity.

Not this director, though. Long scenes. They compel us to accept what we are seeing, that there is no diversion, no jump scare, no smash edit coming. You are here for as long as it takes, and the camera isn’t going to look away, so you shouldn’t look away either.

Sounds grim, doesn’t it? This isn’t a violent film – it’s post-violence, it’s about what comes after the violence has faded. I didn’t feel like this was a flick that wanted us to feel horrible and therefore accept the uncontroversial premise that wars and invasions are bad and should be avoided. We all know wars are bad, but they seem to keep happening. Through the death, the destruction, there is, at least with these characters, some semblance of hope.

Because this isn’t a film with a plot, or a conventional structure, it’s entirely impossible to know what’s coming next, and even knowing that I was stunned by an aspect of where the story goes, about these characters, towards the end. It’s nothing overly-dramatic, or violent, thankfully, but it was still somehow shocking to see, not because of ‘what’ happens, but where it happens, in the pouring rain, next to rows and rows of corpses.

Life has to find a way. You can attribute what happens between Sergey and Katya as being more about loneliness or raw need, but I like to think it’s just hopeful, like, even while picking up the pieces after a war, literally picking up pieces of bodies, a few moments of tenderness show that people can continue, have something to persist for.

It’s not an easy film to watch – it doesn’t telegraph its point that clearly, and mostly you’ll come away wishing that the Russians hadn’t been run by a paranoid, grasping jerk who’s more than happy to torment the good people of Ukraine to appease his own slovenly ego, and doesn’t care how many people die. But you, being a decent sort of person, probably already thought invading countries and killing people, including ones on commercial airliners, was bad.

The film’s not going to teach you anything new about that, but it might give you some other stuff to think about.

How do we survive after a war? What if we lose everything and wish we were dead? Do we cling to whoever we can like they’re a life preserver? Do we somehow alleviate our pain, the pain of the people around us, by finding ways to reveal the enormity of what happened?

Most depressingly, as at January of 2022, hundreds of thousands of Russian troops are on the Ukrainian border, either intending to invade all over again, or wanting to threaten them into giving up their independence (again), and becoming a vassal state.

I don’t want there to have to be more movies about this. Good movies about war and horror aren’t enough to ever justify these grand adventures that obliterate so many lives to salve the egos of petty shitheads.

8 times it doesn’t seem enough to vilify shitheads like Putin, but it’s something out of 10

--
“It’s hard, but I’m trying to look at it another way. We let the dead say goodbye to their relatives, finish their life story, and their war.” - Atlantis