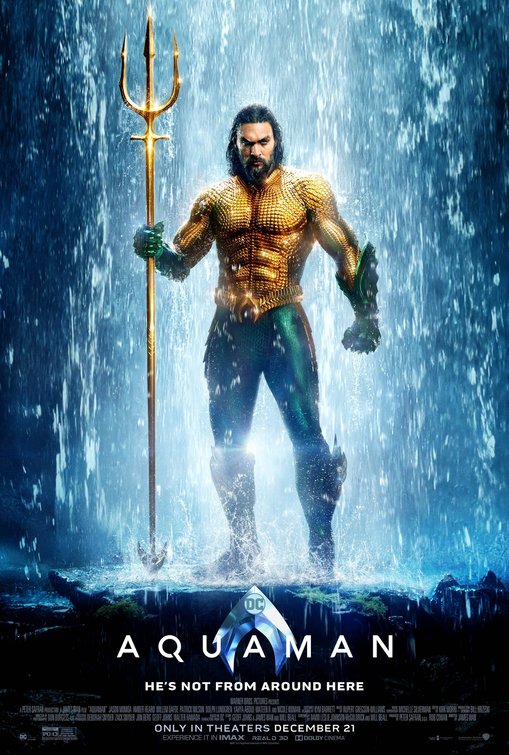 When a Fish is A Man, I'll Hold a Candle for that Man,
Because That Fish Is The Man!

See, I hate travelling for work.

It’s about the only time I get to travel to cities interstate, with work paying for it, but then I have to do work things and stay in work designated places. These places designated by work are usually known as hotels.

Hotels, gods love the industry and all the minimum wage people that work in them and for them, are loathsome places to stay. They’re generic and antiseptic but they still feel permanently unclean.

The only virtue they have, and that is some of them versus all of them, is that some of them have a dedicated movies channel. Sometimes they’ll even have fairly recent movies on them!

What this basically boils down to, which explains both the existence of this review and the point of the preamble, is that on these work trips where I can’t really do much else other than go to the work thing, wander around a strange and sometimes quite boring city, then retire to the confines of a hotel room until the next day or departure. So I watch a bunch of stuff I ordinarily would never watch, because the standards that apply when you’re on a plane or trapped in a hotel room vary vastly compared to when you’re endlessly scrolling through Netflix trying to find the perfect choice that ‘everyone’ will be happy with at home.

So sometimes, again, trapped, I’ll start watching something on a plane, and then finish watching it in the hotel room, or even on the flight back. That’s happened, which I can explain only through being susceptible to a peculiar from of Stockholm syndrome . It also explains the following: on my last work trip of two nights, I watched all these movies thanks to the movie package (which, I’ll have you know, I pay for out of my own pocket: work doesn’t and shouldn’t have to pay for that) Glass, Peppermint, Sorry to Bother You, Aquaman, The Mule and Destroyer. And I started Searching with John Cho, but I haven’t finished it to date, so really can’t justify including it.

So if someone was wondering (and let’s be honest no-one was or possibly could have been wondering) why the flood of reviews of flicks from a while back, it can all be readily explained. I suffered on a work trip, and now it’s the world’s turn to do so.

There’s also another explanation for such a long preamble at the beginning of this review. There really isn’t that much to say about this movie. Aquaman is hilarious in the sense that, compared to not only the Marvel juggernaut’s output, but pretty much every other film that’s come out in the last three years, it’s dumb in ways that we forgot movies can be, because we thought we were past that, but it also, perversely is something of a sweet relief in that it is nothing like the other appalling movies DC / Warner Brothers have been putting out with the sole exception of Wonder Woman, which is still far and away the only good thing this comics apocalypse has brought into the world.

This isn’t a ringing recommendation, all the same. Saying this is better than Justice League or the one when Batman and Superman fought over who loved their respective mothers the most isn’t saying much of anything. Those were astoundingly bad movies. This at the very least doesn’t have the bullshit grim tone of those other flicks, because it’s quite comfortable being goofy.

There’s no attempt to make this exploration of the king of Atlantis, the brother that hates him, all the various weird undersea peoples, anything other than a goofy story where some guy who sounds like a California surfer only even less coherent fights a bunch of dudes, controls some dolphins maybe, and go “Woo” a few times. That’s about it.

Jason Momoa is blessed and cursed in that he looks exactly like people would want a certain kind of character to look like, but he rarely if ever is able to act in anything close to a convincing way. I don’t know what the son of a queen of Atlantis and a lighthouse keeper, or someone with a special relationship with the ocean, or any specific kind of hero should sound or look or act, but it’s generally safe to say it’s not this. If this movie succeeds at all, it’s because they construct, through liberally borrowing from countless other familiar movies, like a movie version of what the Duffer Brothers do with Stranger Things, something you haven’t specifically seen before but find totally familiar. The film is overstuffed with goofy but colourful visuals, a malformed plot that doesn’t really make any sense nor need to, constant activity, anything, really, to hide the fact that Jason Momoa doesn’t have the charisma to match his look.

His performances in everything I’ve ever seen him in to date have, at most, only ever been capable of being one note. To be fair he’s way better here than he was in Justice League, but then everyone and almost everything was terrible about that flick. Here, the flick can barely pause long enough to have him emote about anything. The closest the flick comes is one moment, stretched out over the duration of the flick, to convince us that he’s really on a hero’s journey of some kind.

When we see him trying to save some Russian sailors, a pirate is trapped, and clearly about to drown. When asked for help, he basically grunts “Fuck you, it’s your own fault for being an arsehole”. This choice to not help doesn’t exactly haunt him, because he doesn’t strike me as an actor or character who stays up late at night unable to sleep, probably because that amount of muscle needs a good eight hours of sleep a night or it starts to lose tone and definition. But he does express some misgivings, let’s say, when he wonders if, by him being an arsehole and not saving the chap, and turning the chap’s son into his nemesis, he couldn’t have avoided all this fuss by just saving the guy in the first place.

That almost sounds like I’m giving them / him credit for something close to character development. There is no room for character development in this stupid flick. This is Flash Gordon mashed up with How to Train Your Dragon and Star Wars (and not even good Star Wars – Phantom fucking Menace at that, with the goddamn undersea Gungan bullshit!) and a bunch of other lazy elements, and let’s face it no-one wanting character and meaning walked into a cinema or pressed play on a piece of shit movie called Aquaman expecting it to be anything but what it is.

Then there’s a whole section lifted from an Indiana Jones film, I’m not even fucking kidding about that, down to even the clothes they wear, leading to the hero having to get a magical trident in order to do something else and then win a fight with someone and then save the world again and, really, honestly, who fucking cares.

In a film with oodles of special effects, entirely filmed in Australia but without any trace of the great nation on the screen, the most special effect of all is the one used to smooth over the passage of time, age and surgery on Nicole Kidman, trying to differentiate her early scenes with latter scenes, and it really is uncanny. It’s also weird that in the same short space of time I watched two films unconnected to each other that both starred Nicole Kidman, both of which required scenes set in the 90s, both of which make her younger self look supernaturally young. The other flick is called Destroyer, and it’s used to much greater effect, especially when you consider how important it is early on, and how it’s counterbalanced by how awful her detective character looks in the present.

This tech… no good will come of it. Pretty soon every actor is going to demand this digital smoothing in all their scenes regardless of whether it relates to the setting or context. They’re not known for their calm in the face of the ravages of age, or how chill they are with accusations of vanity.

I give it days before George Clooney is going to look like one of the Jonas Brothers every time he appears onscreen.

It’s impossible to really take any of this story seriously, and so I did not. I will not be watching again or talking about it more, so at least there’s that. Wherever it is on the spectrum of enjoyable comic book based movies, this exists at the extreme (there are at least three axises on my version of this spectrum, maybe more) where it’s not absolutely godawful, but it’s not particularly enjoyable, memorable or interesting, either.

It just is. Like the cold sore virus, like ingrown toenails, like cancer, it just exists, there’s no denying it, but we’re under no obligation to encourage it, either.