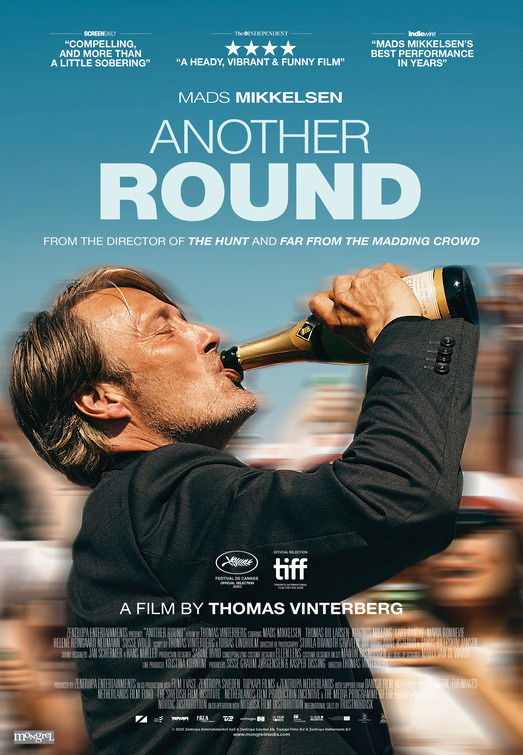 To alcohol - the cause of, and almost never the solution to,
all of life's problems

One could think that alcohol has had a good enough run for long enough that it wouldn’t really need to be celebrated in cinematic form, but Danish director Thomas Vinterberg and his cast of Danish legends (well, at least Mads Mikkelsen is well known) choose to highlight the many highs and precious few lows of drinking in this here cinematical enterprise.

I am very conflicted about this flick. I get that it’s not really about drinking, or alcohol, per se. It’s more about the malaise of middle-age, of not being present to the people around you, of feeling bored and disconnected. But it also presents the consumption of alcohol as a mostly joyous experience with very few side-effects beyond greatness.

Drinking in Danish culture seems bonkers, as depicted here. The film starts with a huge bunch of what I assumed were uni kids, but they’re actually in high school, lugging around crates of beer and playing yacht race-type games which involve sculling booze and running, two things that shouldn’t really go together. The high energy raucous start, which involves the kids carrying on like pork chops on public transport and handcuffing a transport guard to a railing, makes underage drinking look like a lot of fun.

That is strongly contrasted with the energy exhibited by their teachers. Martin (the magnificent Mads Mikkelsen) is so listless and drained of interest in his own subject, which is history, that he cannot maintain the thread of his thoughts, or give a shit about what the kids are learning from him. He brings this same energy to every other aspect of his life. He’s checked out from his kids, he’s checked out from his wife, and seems to have no interest in anything other than continuing the drudgery of daily doleful domestics and doing the bare minimum in the classroom.

A co-worker called Nikolaj (Magnus Milang) has a birthday dinner planned, so Martin and two other colleagues, Peter (Lars Ranthe) and Tommy (Thomas B Larsen) go to a fancy shmancy restaurant where they give you shots of vodka with your caviar and perfectly paired wines with your meal.

Martin is polite, but not really connecting, he’s also not drinking because…it’s a school night? The other guys drink heartily, feast and carouse. Nikolaj, whose birthday it is, and who I think teaches psychology, proposes two things. One, that Martin is lacking in self-confidence and joy, which he makes some noises about but basically accepts, and two, that deliberately misinterpreting a joke from someone who actually exists, being Norwegian psychiatrist Finn Skarderud, who suggested that people have a 0.05 blood alcohol deficiency which needs to be corrected by drinking small amounts of booze regularly, should be their role model.

I’m not going to justify anything by looking it up, because it’s a stupid idea, and it sounds like something the marketing department at a booze company came up with and sent out to gullible and lazy newspapers to print without vetting.

Plus, alcohol is a well-known poison which causes millions of deaths per year, and a lot of misery for even the ones who survive, so it seems like horrible negligence for a psychiatrist to be recommending something so irresponsible.

Still, these are teachers, thoughtful men, looking for an excuse to start drinking all the time. Nikolaj proposes that the men adhere to a strict regimen of drinking just enough to keep them at 0.05, but not to exceed it, and not to drink in the evenings or on the weekends.

Martin at first is all like “no thanks”, but when he succumbs, it’s a transformative seduction. You’ve rarely seen someone drink a drink, say nothing, but convey just how sublime the feeling can be.

That’s part of the reason why this is such a dangerous film. The truth is, alcoholics don’t really need additional excuses to drink, they can always invent them, but something like this flick, which slyly suggests alcohol can make the pain of life somewhat lighter, is like catnip for drunks.

The men, especially Martin, get little breathalysers to test themselves, but basically now drink from the morning onwards. And it’s transformative. Martin reconnects with his students, and finds ways to incorporate his newfound love of booze into the curriculum. Nikolaj, well, even though he enthusiastically embraces the “we are doing a serious scientific study”, doesn’t really seem to benefit, but it does make him slightly more chill coping with a very young family. Peter, who teaches philosophy and music classes, encourages his students to dig deep and really connect with the material and each other.

Tommy, who I hope is a phys ed teacher, already seems like an alcoholic when the ‘experiment’ starts, and he’s the one least likely to be able to pretend to be a so-called ‘high-functioning’ alcoholic. He gets even worse at a job he seems unsuited to anyway, but at least he bonds with a tiny little boy he calls Specs all the time, who seems to thrive under his influence (of being under the influence).

Martin’s students love him again, so he tries to apply his newfound sense of boozy self-acceptance to reconnecting with his wife and sons, but they’re going to be a harder sell. The teenage sons don’t seem to really give a shit, but his wife Anika (Maria Bonnevie) seems surprised at first, and then regretful that he’s perked up again.

When they have sex together on a camping trip, in what is obviously the first time in ages, she makes various sounds about how nice it is to ‘reconnect’, but how it’s probably too late.

Huh. So drinking allowed him to reconnect, but it didn’t magically make everything better? The problem is, she’s not drinking. Maybe if he drinks twice as much, the result will be twice as great, and make up for the fact that she’s already over him?

From “being at 0.05% is good but could be better” the “study” is changed to “0.1%”, which means more drinking, more near misses, no noticeable side effects, no negative health outcomes. At least for 3 of the chaps. Tommy, the sports guy, is clearly fucked, and long ago abandoned any semblance of moderation, and is clearly headed for an outcome people who’ve never heard of the film can predict. And yet?

The last part of the “study” involves giving in completely to the demon drink, abandoning all sense of control and embracing that there is no perfect blood alcohol level percentage other than 100%. So it’s only at this stage that there is a monstrous kind of bender where the four men drink the hardest of hard liquors, and destroy themselves in ways that are no longer funny or charming or obviated by the handsome features of Mad Mikkelsen, who at 55 could probably still convince teenagers to smoke crack.

When the wheels come off completely, and all of the men end up deeply ashamed of their respective behaviours, Martin loses what he was going to lose anyway, Peter seems okay, but confronted with a student overwhelmed with anxiety, he recommends a course of action any reasonable person would think is a terrible fucking thing to do.

The school administration, after the break, just before the end of the school year, makes some kind of statement about some of the staff drinking on the job, and that’s the moment Tommy bursts in barely able to stand, so, yeah, he’s not long for the job, but the others are chastened.

Martin loses his family, but looks after Tommy for a while, who clearly loathes it because it shames him. His wife is gone, and he still thinks if he says sorry and promises to make it up to her etc, that it would be enough for her to come back. He doesn’t seem that invested in it, but does it anyway, because that’s what people do.

The kids, especially the senior kids, are at the end of their schooling; the damage is done. If they absorbed some of the positives and ignored many of the negatives, either way, it’s their time now. There are a few funny practices to do with the end of their last classes which are, I’m guessing, particular to Danish schools. Sebastian, the student with overwhelming anxiety who already had to repeat because he couldn’t face exams, again can’t face his exams, including a viva or spoken argument kind of exam. His supportive teacher literally gives him the means to get through his exam with strong alcohol, and honestly…

The ending, after an unexpected death (unexpected to them, it was so on the cards to us), coincides with the end of the school year, and results in an ending so joyous, so exuberant that I can barely even approach it critically. It is insanely joyful. There was a running joke throughout the flick that Martin used to do jazz ballet when he was young, and every time the lads get together some of them try to convince him to cut loose and show his dance moves. Martin, embracing the joy of the students celebrating the end of their high school studies, cuts loose so utterly that it is stunning to watch. And that doesn’t look to be a stand in for Mads - that IS Mads doing a whole bunch of moves men half his age would be wary of.

I’m…I’m not really in two minds about this film. It is utterly, thoroughly, bracingly enjoyable to watch. It is also deeply irresponsible to portray drinking like this. But who am I to judge the director? His teenage daughter Ida died just as the production was starting, due to a car accident. Many of her school friends appear in the flick as Martin’s students. A deeply saddened director thought, however inappropriately, to desperately find a way to embrace the joy of life again, and who the fuck am I to say he shouldn’t have? Alcohol wrecks so many people’s lives. The mythologising of it contributes to its power, only part of which is its addictiveness. The narratives about talented artists being drunk off their arses, or that drinking is great for handling anxiety are deeply problematic and enable many an alcohol abuser’s bad decisions.

And yet there are joyful times too. It gives us so much, including great times with friends, including being able to forget ourselves for a while, and the prisons we construct within our own heads. But it takes so much too.

Another Round gives more than it takes, but, honestly, don’t let anyone under 30 watch it.

--
“Well, Kierkegaard's concept of anxiety illustrates how a human being deals with the notion of failing.”
- “And even more importantly?”
“With having failed, you must accept yourself as fallible in order to love others and life.” – says you, buddy. I don’t have to accept anything - Another Round