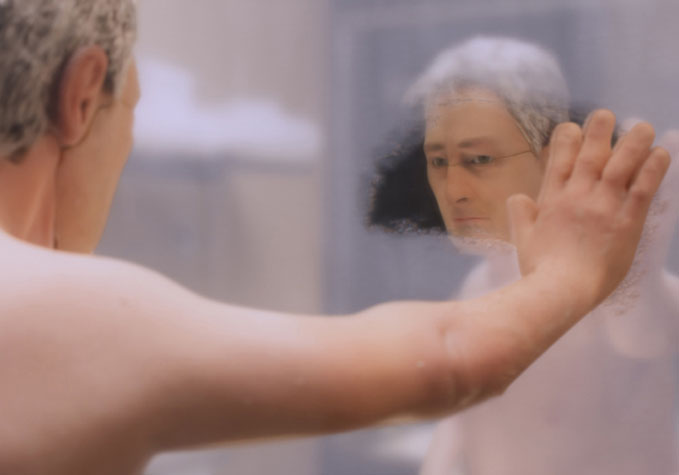 Is there a word for a type of mental condition where you see movies and think
that every character in them is played by a puppet and that they all have
the same voice?

It’s also… an odd film to describe, and it sounds far more amusing to describe than it ends up being. Being from the mind of Charlie Kaufman, he who came up with the screenplays for such out there and phenomenal stuff as Being John Malkovich, Adaptation and Eternal Sunshine of the Spotless Mind, you are right to expect that there’s some strange artistry going on. And there is.

To say that the story is entirely told with puppets again makes this sound comical, but in reality this is stop motion animation with some very expressive and articulated puppets. It’s also in the service of a story mostly set in or around a drab hotel room.

Michael Stone (voiced by David Thewlis) is some kind of corporate motivational speaker, and he’s been brought in to Cincinnati, Ohio, to give some speech at a conference. Depressing, I know. But the strange thing is (one of the countless strange things is) everyone he speaks to, male or female, has the same voice (voiced by Tom Noonan). The awful cab driver who keeps trying to convince him to go to the zoo, his ex-girlfriend Bella whom he tries to reconnect with, the staff at the hotel, his wife, his son, they all sound like Tom Noonan and they have the same puppet face.

The first half hour of the film is deliberately a study in tedium. Michael finds all interactions with everyone perfunctory and unfulfilling. He seems to derive no pleasure in anything other than drinking and smoking.

I can relate to that, only insofar as drinking and smoking are two of life’s greatest pleasure, or at least the two pleasures least likely to ever be fully satisfied.

Visually, as well, we’re seeing this incredibly detailed and expressive world used to bring us into the mindset of a deeply lonely and disconnected man.

There is something about the mundanity, the relentless unremarkableness of the exchanges that clues us in not only to what Michael’s going through, but it also kinda makes us wonder about the abundance of mundanities that constitutes many of the daily interactions we have. How much of it, as his bestselling book attests, and the conference at which he is presenting, is meant to disguise the fact that we’re so completely disconnected from the people around us?

Well, I hope that for most people Michael’s misery is not one that they personally share, but it’s an interesting window into one character’s sad middle aged life. The aggressive sameness of this sterile world primes Michael and the audience for when Lisa (voiced by Jennifer Jason Leigh) finally comes along.

After an age of listening to nothing but Tom Noonan voicing countless characters, and seeing the same puppet faces, Michael finally hears a snippet of a voice unlike all the other voice(s) we’ve endured. He hears Lisa and must find out who she is.

You might be thinking, well, this sounds like every story ever told about middle-aged guys trying to fuck their way out of their middle-aged malaise with a younger woman (ie. every movie Woody Allen you’ve ever seen and every French arthouse flick ever made), and you’d be right. But the difference here is, if there is that much of a difference, is that we’ve been so skilfully brought in to Michael’s headspace by the unavoidable design and artistic choices, that we too understand at least for a while why Lisa is so important to him.

It’s been so long since he’s heard a different voice, we presume, that anything Lisa says, no matter how mundane, is like an angelic chorus from heaven to his thirsty ears. Her appearance, as well, is different from the other people (puppets), and that alone is entrancing for him.

Why so for Lisa? Poor Lisa. Whatever combination of life experiences that have occurred to render her in such a vulnerable (hopeful?) state, she can barely believe Michael’s enthusiasm, or why he’s so entranced by her. I won’t say that the depiction of their interactions is incredibly deep or meaningful (it’s certainly meaningful), but the expressiveness of the animation, of the puppets themselves is so compelling that real, awkward emotions shine out through the screen.

When he’s saying to Lisa, begging her to just talk about whatever pops into her head, or to sing Cyndi Lauper songs, there is this ache, this yearning in his voice and actions that’s quite affecting. Then you remind yourself: they’re just goddamn puppets, not ‘real’ people, but then you wonder what the difference is. Puppets can ache and long for that which they cannot have. They can deliberately eschew connection with other people, and still lament its absence. They can look at something that they know is too good to be true, and throw themselves into it anyway without any thought as to what will happen. Humans do it all the time, why not the felt-based lifeforms?

This is, again, just to be clear, an odd and very mature kind of story, so when the story reaches the point where you’re wondering how they’re going to show you puppets having sex, well, let’s just say it’s every bit as sweet and excruciatingly self-conscious for the puppets as it is for the rest of us as certain times of our own lives. It conveys a lot about the characters, far more so that most sex scenes with actual humans ever do on screen.

There is an inevitability to the story, to what happens to the characters towards the end which would only be surprising if you’ve never known any middle-aged desperate men or if you’ve never see what happens when people compulsively get what they most wish for, which is, that there are no magical solutions to intractable problems; that banging anyone, whoever they are, only works for a while.

And then you’ve got your regular life to deal with again, the everyday, the quotidian, the daily agonising struggle. It’s enough to make a puppet rip their own face off, I tell you.

Sure there’s a lot of artistry on display. It’s incredibly well realised, incredibly intricate, and has the feeling of something intensely fussed over. But I’m not sure I came away from this flick with anything other than irritation, sadness and disappointment. If that was the sole intention of the creators, well, for less time and even less money they could have stubbed my toe and told me I’ll never amount to anything for exactly the same result, but with much less effort and expense involved.

If the ultimate point is that someone like Michael is unlikely to ever be happy, or that Lisa, who doesn’t suffer from the same mental health issues that Michael does, is not going to be happy either because jerks like Michael will use her when it suits them then discard her when it no longer does, well, that’s pretty cruel, and it’s also something I already knew about life, puppet-based or not.

I am not the chap who looks for happy endings where they don’t belong, but Kaufman’s been able to make almost profound and sometimes hilarious points about being human, about sadness, about doubt, about love in his other screenplays so much so that I have to admit I’m pretty disappointed in this. It’s not uplift I’m looking for, but maybe just a modicum of hope? Of the possibility that there is more to life than isolation and dejectedness and flat chitchat between strangers or family?

Though there’s no doubt it’s an impressively realised project. Like any diorama or installation, though the intricacy of a production rarely supersedes the importance (for me) of what it makes me feel or think about. And my thoughts/feelings weren’t ones I want to revisit.