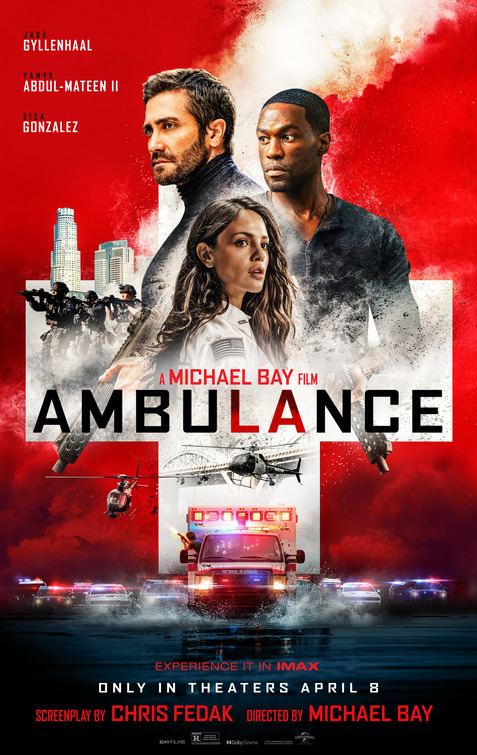 Wah - wah, someone call the Wahmbulance

There’s no two part collection of name and surname that chills the blood like “Michael” and “Bay”. “Michael” and “Myers” can chill the blood too, but that depends whether you’re afraid of the implacable enemy in the Halloween films, or you’re wondering why everything Mike Myers has done since the first Austin Powers has been so unremittingly terrible.

Michael Bay has made some of the loudest and dumbest films in Hollywood history, and whatever his age is, he’s not about to stop now. This is, somehow, a remake of a Danish film, which Bay might have heard about (I find it hard to believe he watches other people’s movies, it seems off-brand), where crims hijack an ambulance in order to flee from the authorities.

I haven’t seen that film, but I can guess quite easily that it is nowhere near as loud or fucking dumb as this flick. But I knew that coming into the experience. It’s a simple bet to take, because nothing can be as loud or as dumb as a Michael Bay flick.

This is not the place to have the argument as to whether Bay is a cancer on the body politic, or the body cinematic. Consider Pearl Harbor, Armageddon, Bad Boys, and the general bombast and dumbness they’ve contributed to our lives and minds. Then there’s the visually incoherent Transformers films, which are somehow even worse. If he’s made one okay movie it might be Pain & Gain, but even then he could barely resist his urges to overedit everything all of the time.

There are no such abstentions here, no urge unfulfilled, no screaming overamped moment held back or resisted. And now he’s adding swooping drone shots to his limited repertoire of “high energy” camerawork.

The premise is simplistic enough such that you’d be finding it difficult to justify as to why this flick needs to be as long as it is. I think it came in someone over two and a half goddamn hours. And all you get for that extra time, since there’s little to argue as to why it couldn’t just be 90 minutes or so, is just more scenes of an ambulance driving around being pursued by the cops, by all the cops of LA.

The implausible bit isn’t that Jake Gyllenhaal and Yahya Abdul-Mateen II play brothers in this movie. The implausible bit is that an ambulance driven by crims through the streets of LA over the course of a very long day could somehow avoid traffic enough to drive more than 20 miles an hour.

This flick is a very simplistic bunch of pancakes, that are a bit overlarded. Only one character has a backstory to justify his actions, but everyone else just is who they are. The Will character fought in one of America’s recent endless conflicts overseas as a soldier, but comes back unable to find work, unable to afford the health care his wife desperately needs.

But he is a Good Man, don’t you know.

His brother Danny, played by Gyllenhaal, is not. He is a crim who does bank robberies and, I dunno, steals cars and candy from babies, occasionally. When Will approaches Danny asking for money, naturally, he forces him to participate in a bank robbery which goes wrong because of the random things that can go wrong when you’re committing a major crime.

I have to say, as someone who loathes everything Bay stands for, the initial half hour of the flick works solidly. The brothers get to expound on their motivations and peccadilloes, and we also get to see the other person, the third leg of this flick’s tripod of personalities, being Eiza Gonzalez as the paramedic whose ambulance the brothers will eventually hijack, showing how seriously she takes her job, but also how disconnected she is from the people she saves.

Everyone except Will and Danny dies from their massive crew of idiots, but they manage to hijack an ambulance and pretend to be paramedics themselves, when they’re hauling away a cop that the Good Guy, being Will, shoots “accidentally”.

See, it’s important that Will did it accidentally, because otherwise… he’s as much of an arsehole as his brother? The Danny character does pretty much come across as a bit of a psychopath, but this isn’t like the other psychopaths Jake Gyllenhaal has played.

No, this one yells way more and is generally agitated / speeding even when nothing bad is happening.

Of the thousands of cops after them, there’s also an FBI agent who had a tangential connection to Danny, who was friends with him in college. This FBI guy often tells all the other cop guys that they’re wrong in their predictions of what Danny is likely to do, mostly because for some reason studying criminology at college makes a crim an expert in what cops would do in a given situation 20 years later.

Whatever the plausibility of these set ups (ie. none whatsoever) it tries to provide cat and mouse brinkmanship between Danny and Will, all of the cops, and a bunch of other crims they try to enlist to help them somehow escape the city.

This being an American film, and the two brothers being set up as the good one and the insane one, it was pretty obvious to me from the first five minutes how this flick was going to go, what the characters had to do in order to justify who lives and who dies. As formulaic as this all plays out, I won’t say that I didn’t enjoy this flick.

Morally speaking, enjoying a Michael Bay flick is possible, but it leaves you with a similar feeling after you have “enjoyed” KFC, or after you’ve “enjoyed” crystal meth. It’s a horrible, dirty feeling, with little justification. I joked two films (of his) ago that Yahya Abdul-Mateen II is in almost every film that comes out these days, and as hokey as his character is, I generally enjoy his performances, and I kinda “enjoyed” it here. Gyllenhaal can too easily play charming psychopaths, and he’s clearly having a ball here, coming across as something of a cartoon.

If anyone does great work with unbelievable bullshit, it’s probably Eiza Gonzalez keeping things rolling along, and having to do scenes where she’s reaching her hands into a patient’s abdomen in order to save their life, while on the phone with two surgeons generously taking time out from their important golf game to guide her through the intricacies of spleen surgery, that’s solid work.

She’s great, and she’s been putting in solid performances in supporting roles in films as different as Baby Driver (where she was the crim), I Care A Lot (as the lead sociopath’s girlfriend) and here, as a paramedic who knows she might just have to kill some motherfuckers if she’s going to survive.

There are some action sequences that are okay, some that are strange in how cheap they look, and some that are clichés built on older clichés. Even as I was carried along by the flick, I rarely had the sense that this would have actually been able to work in the real world. One strange scene in particular has a bunch of other crims trying to divert the authorities by stealing a bunch of other ambulances, so that the various cars chasing or helicopters might be confused.

That’s…pretty dumb. Even I know how I would differentiate the one I’d been chasing from the others. But then they also, in a brief interlude, have the ambulance painted fluoro green…

So that it stands out even more than before? Various people yelled various things at each other after that; I could make neither head nor tail. Through that confusion some crims do something ultimately that kills so many cops, and it made me wonder “the people making this flick know that, if they’re going to make one of the brothers a saint, he’s going to be held liable for all these cop deaths, which means like lethal injection?”

That would be a sad downer to end upon, wouldn’t it? So they try to contrive an ending which somehow tries to be upbeat, which is kinda cowardly on Bay’s part. The one consolation I have is that it pretty much guarantees no sequels, fingers crossed.

There are times when I can enjoy this kind of propulsive but mindless drivel. The fact that I got some enjoyment / diversion from it doesn’t mean I think it’s a good film. When I give it the score I’ll give it, you have to appreciate that this is grading on a substantial curve. Most if not all of Michael Bay’s movies are empty and traumatic, so giving this a 7 only implies that it is watchable / enjoyable for a Michael Bay movie. A Michael Bay 7 means my eyeballs didn’t fall out and I didn’t lose the will to live, not that it’s on a par with something like Heat or Speed or Cannonball Run.

Ambulance – if you’re in one, it could be the worst day of your life, but if you survive it, it could just be the best.