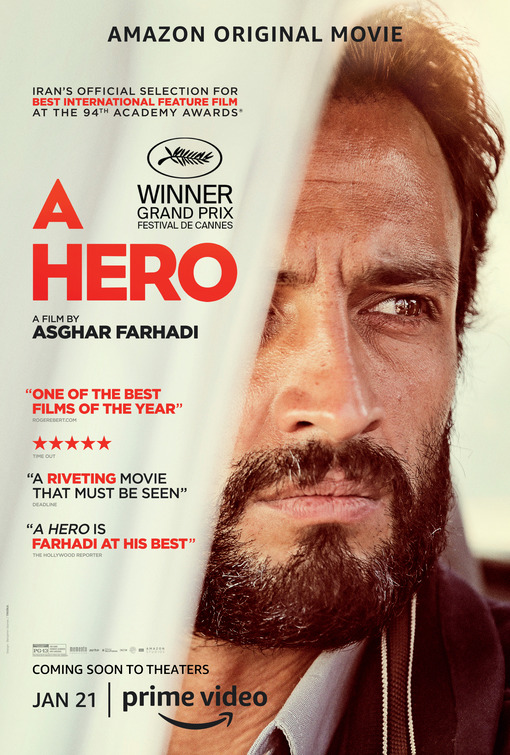 Would you give this man all your gold coins?

If nothing else I would have thought the Revolutionary Guards would have sifted through his films suspiciously for any hint of anti-establishment sentiment, and punished him for it. They always, invariably, find what they’re looking for.

Farhadi doesn’t make it easy for them. He himself says his work is never political, which, everyone else immediately thinks “that makes it even more political than before!”

To a western ignoramus such as myself, well of course I’m not going to get subtle references to critiquing the regime if and when it occurs, but the mere fact that an Iranian flick exists and its main topic is the complexity of life in modern Iran itself is a criticism of how fucking bonkers life is with a theocratic viciously authoritarian state in charge of things.

A Hero has a seemingly simple premise: a guy in debtor’s prison tries to find a way to pay off his debt to his former brother-in-law in order to be set free, and with each minute that passes finds new ways to complicate things and new levels of intricate complexity. Life in Shiraz (not the wine, but the city from which I guess the wine takes its name) is not easy.

Rahim (Amir Jadidi) seems like a happy go lucky type. As soon as he’s out of prison on leave for a couple of days, he calls on his brother-in-law, who seems to be working as an…archaeologist at the tomb of Xerxes? The brother-in-law is Rahim’s conduit to the man who is keeping Rahim in jail.

And that chap happens to be… Rahim’s ex-brother-in-law through marriage. That guy, Bahram (Mohsen Tanabandeh), you’d think would have to be some kind of angry jerk for keeping the young, charming Rahim in debtor’s prison for no good reason.

Except that’s not quite the case. While Bahram is angry, and inflexible, he does not trust Rahim’s protestations or honeyed promises about money raining from the sky. And he fears that Rahim will try to do something to stop his sister from remarrying (someone we never see).

I don’t claim to understand the money that’s at stake here, but I think I recall Bahram saying the amount owed, as in, the money he’d given Rahim to pay off a loan shark for a business venture that went sideways was 150 million toman, which works out to around $50,000 in Australian terms.

That’s a fair chunk of change. By some twist of fate, Rahim comes into possession of a handbag with 17 gold coins in it, and hopes that they will discharge most of his debt, and get him out of prison. The problem is, the coins are only worth about half of the debt owed, and Bahram has no interest in being generous.

The poster to this movie, of Rahim looking nonplussed, actually does the flick something of a disservice. Rahim is smiling and ingratiating in almost every scene he’s in, no matter how confident he is, no matter how desperate. The poster makes him look like a hardass plotting revenge on those who have wronged him.

Returning the gold coins to the woman who lost them seems like the right thing to do, but Rahim, now knowing that selling them isn’t going to work, wants to somehow spin the return of the coins into another, you guessed it, opportunity. Rahim does enough “aw shucks, little old me, no, I’m not a hero, you’re all the real heroes” to the prison authorities, to the media, and eventually social media, meaning broader Iranian society, such that he achieves a certain level of fame, and people want to piggy back on his perceived righteousness for their own ends.

Eventually, it gets to the point where people are willing to put together the money to buy his freedom, and it looks like he could be home free. Free to marry his secret girlfriend Farkondeh (Sahar Goldust), who’s actually the one who found the coins. Free to parent his troubled son Siavash (Saleh Karimaei), and free to coast on his fifteen minutes of fame.

But as it says in the Holy Qur’an: What social media giveth, social media can taketh awayeth, and leave nothing but misery in its place. What we’ve seen of days of Rahim’s work trying to get everything in place, trying to get everyone to be either complicit or onboard (including his poor, stuttering son) trying to convince everyone that his version is close enough to the truth that everyone should be cool and just let things slide, well, all it takes is a few pokes from people not on the Rahim Express for everything to start falling apart so effortlessly.

A beautiful number of scenes include a crowd of people, applauding Rahim and his shining goodness, with ex-brother-in-law Bahram crossing his arms so firmly they look like crowbars could not pry them loose, shaking his head with disgust. This is a flick with so much going on, with so many increments of things going wrong with the worst laid plans of mice and men, that you wonder a lot of things, including who is the real arsehole in this story.

Of course it’s easy to say it’s Rahim, because most of the bad decisions in this flick are entirely his, and when he tries to use the fact that many of his courses of action were at the instigation of others, but the person is most certainly not Bahram, who was hurt by what he saw as Rahim’s betrayal, which continues to affect him to this day, as it was his daughter’s dowry that he gave Rahim, and with that lost I guess she might as well be dead(?)

It’s not Farkondeh, who seems to have an absurd amount of love for Rahim, to the point where she’s willing to lie for him even to the authorities (bad idea in an authoritarian state). I don’t even think the arsehole is the functionary at the council who starts picking apart Rahim’s story, not because he cares, but because he doesn’t.

And the most absurd thing of all is when they try to find the woman whom the coins were returned to, only to realise that she’s a ghost, who might not have been the real owner of the coins. Even she’s not the arsehole in the story, because if I grasped what they were going with, she had her own tragic reasons for needing the coins in order to stop someone’s execution.

So what’s Farhadi’s ultimate point? That we’re all arseholes?

Maybe. While there may be no villain in this, pride and the concept of honour lead a lot of people to do a lot of stupid shit that they shouldn’t have, either in the pursuit of honour or to desperately avoid public shame (which never works, because social media thrives on public shame). I was somewhat surprised that social media plays such a prominent role in this flick. I guess I’d imagined that the authorities in Iran squashed social media, or maintained a brutal strangehold on it like they do everything else in the country.

And women play such a prominent part throughout the story. Some women make choices which will spare men shame, while potentially bringing it upon themselves; another woman decides to pull the trigger on something that will embarrass Rahim, but she does it because of her love for her father. Other women, either in Rahim’s family or working at the prison charity that’s desperate for a higher profile which means more money, they all are making decisions (admittedly bad ones), which is something.

There are points that might be more universal than I give it credit for, because hypocrisy and holding people up as heroes is endemic in all cultures, but there’s enough here that makes it seem particular and peculiar to Iran. Everyone seems to have their own story, everyone seems to have a backlog of motivations, and they all seem to only agree on one thing: Rahim, you’re a lying piece of shit, and only bad things should happen to you, but the people around you deserve better.

It’s a masterful exercise. I loved it, but not as much as A Separation, because that flick was a masterpiece, but I would still happily watch this again. Such a keen and clever flick, though.

--
“Why should someone be called a hero for doing the right thing?” – where’s my parade - A Hero