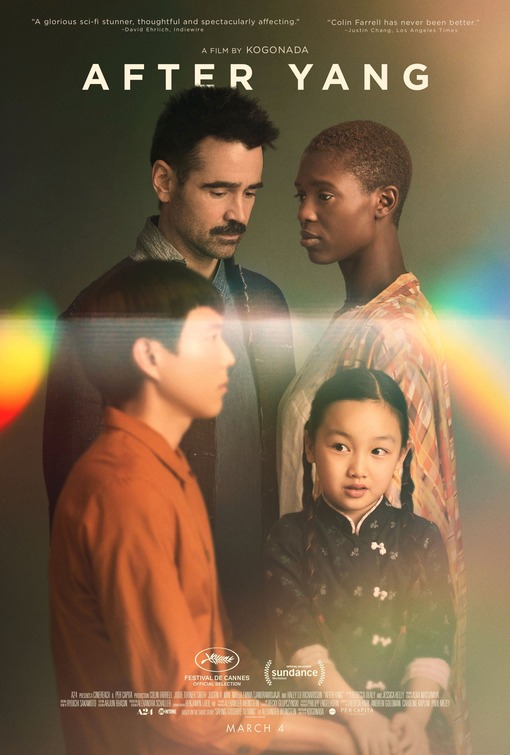 Yang version 2.0 will be way better

The future looks pleasant… Easy on the eyes. Very tasteful.

But of course there are still problems, mostly because people are still around.

After Yang is the kind of science fiction flick that people lament doesn’t get made often enough, and then don’t watch because it doesn’t have explosions or guaranteed Hemsworths in it.

It might be set in a brave, new future, but its issues for its characters are still recognisably human ones.

Even if much of the story is about what happens when an android (Justin H. Min) stops working.

There’s a family, made up of Dad (Colin Farrell), Mum (Jodie Turner-Smith) and their adoptive daughter Mika (Malea Emma Tjandrawidjaja). She is of Chinese extraction, and the parents, feeling an obligation to have her learn about what they see as her culture and heritage, buy a Chinese android they call Yang (Min), to be like a big brother to her, who can tell her all these facts about China, and teach her Mandarin.

Right from virtually the beginning of the film, Yang shuts down, and can’t be restarted. They try switching him on and off, they probably try to reset him to factory settings. They don’t try whacking him on the side of the head, thankfully.

It’s not that subtle, but the family don’t have a lot of money to throw around, can’t afford to officially get him repaired because, hey, he was purchased in a dodgy deal in the first place. The legit people the Dad takes his Yang to get repaired at can’t do anything, the dodgy guy he takes him to can’t really do anything, but he does find something in Yang’s chest that proves what he suspected all along: that someone was spying on him!

You know, as opposed to the slender black objects we all carry in our pockets or bags that tell all sorts of corporations everything we’ve done, said and searched for on any given day. In their future, though, they are beyond such petty devices.

The dad somehow ends up at a museum that seems dedicated to telling the story of these so-called technosapiens as if they’re a new form of life, or from somewhere else, where they tell him that the thing from Yang’s chest is really a memory thingie, with short recordings of stuff Yang observed every day of his existence.

It’s through these recordings, which the dad and eventually the mum observe through these AR glasses, that they realise, or remember, how close to what we think of as being human Yang could have been, and also the times when his hopes and aspirations would bump up against the limits of his programming. Which would make him sad(?)

We have a strong impulse to anthropomorphise all things, from animals to appliances, for our own purposes. And with Yang looking identical to a human (albeit with a bowl-head haircut, which is flattering to no-one), it’s even easier to superimpose human motivations and feelings to his actions or inactions. But ‘he’ would be the first to say that he’s programmed to ‘think’ or ‘say’ that, and yet in other ways aren’t humans ‘programmed’ to say or think certain things in given situations?

The flick, to its credit, never establishes either way what the “real” deal is with Yang. That is why the flick is more about the humans around Yang, and their reactions to his “loss”, and how much the question of his self-awareness, how close he is to being a real boy, doesn’t ultimately matter to many of these people.

To the little girl, he was literally a big brother. Questions of sentience or self-awareness are immaterial. And from the arguments between mother and father, it seems like Yang was more than just a complex computer program with arms and legs: distracted / busy parents pretty much outsourced parenting entirely to the android, allowing them to focus on the important things, like their careers.

When Mika is sad because other schoolkids tease her for being ethnically different from her parents, and therefore not their “real” kid, Yang consoles her as they walk through an orchard, showing her how limbs from different fruit trees can be grafted over time becoming one with the new tree.

The cynic in me could say “well, the people programming this android for this purpose would doubtless foresee such a situation cropping up, and would input a subroutine to etc etc” But that’s not how the scene feels.

It feels like Yang understands how Mika feels, and comes up with a way to console her using his store of Interesting Facts, not because he is compelled to by his programming, but because he thinks it’s a way to help Mika, because he doesn’t like seeing her feel so alone.

He really is the glue keeping this stupid family together.

She, the mum, is I think an architect or something, and the dad sells teas: teas that people don’t really want or care about. He’s not even really sure why he does what he does. Later on, when using the glasses, he reminisces about a conversation he had with Yang about tea. It’s such a great scene, in a film replete with great scenes, where the dad talks about, when asked, what drew him to tea in the first place. It wasn’t because he loved tea and thought he’d make it his life’s passion / make a career out of it. It was because of a documentary he watched about a guy who pursues the rarest of teas.

The second that Farrell refers to a German man in the documentary, and starts mimicking him, I immediately realised two things a) it is most likely a real documentary and b) Colin Farrell can do an excellent impression of the great Werner Herzog.

I haven’t watched that doco, called All in This Tea, but I assure you it is real and it is (probably) spectacular. The reason it is mentioned, is because Yang is asking the dad what’s so great about tea. The dad, lacking the language to describe even what makes tea “tea”, refers to the documentary, because Herzog himself describes the language required to even describe tea as needing a full sensory set of observations or comparisons that have nothing to do with tea itself: a particular tea is described as causing its imbiber to think of, or to feel like they’re walking through a rainforest.

Yang and the dad try the tea, and the dad, after enthusing about the doco and the excitement he felt after watching it and hearing all those words describing the experience, ends up disappointed, and says something like “not sure if I can taste the forest”.

If he lacks the ability to really appreciate it, or enjoy the experience himself, then what chance does Yang have? You start wondering if the film is really about the limitations of Yang’s existence, and maybe it’s more about our own limitations.

Through sifting through Yang memories, they come to realise that Yang seemingly had a whole relationship with, like, a human girl (Haley Lu Richardson) and stuff. Like, they even went to gigs together. Apparently Mitski is still really big in the future, and still doing gigs.

The revelation that Yang maybe had a relationship, maybe even felt human-like yearnings for what, companionship, affection, love? is then subverted when it’s shown to be only a part of an even bigger puzzle, about how maybe being human is just remembering, and being around long enough to love people or stuff for long enough that you end up suffering from its loss.

All of these ideas are raised so gently, so affectionately, that it feels churlish to bring up any complaints. Of which I only have one, which is that I did not like the ending, but maybe it’s because I didn’t want it to end. Or alternatively, it’s a shithouse ending.

Either way, I greatly enjoyed everything up until then. Great, low-key performances from everyone in this, which never fail to be touching. Obviously I’ve seen Colin Farrell in stacks of movies, but here he gives one of the lowest key performances of the year (versus the other most over the top performance of the year as the Penguin in the most recent Batman movie). The last thing I saw Jodie Turner-Smith in was Queen and Slim, and she was magnificent there, but she’s good in a much more restrained role here. It was amusing watching her take her husband to task for neglecting his responsibilities towards their daughter, all while she neglects her daughter herself, because, fair’s fair. In the future it won’t just be lazy dads avoiding their families through the excuse of work.

The little girl is fine, but the real standout is Justin H. Min, who so beautifully portrays this character. Without him, despite the fact that he spends most of the film lying down, without his nuanced, deeply felt performance, the flick wouldn’t work at all.

It will sound like I am taking the piss, but I assure you that is not my intention: one of my favourite Pixar films is Wall-E, which is also set in the future, and is about a little robot who spontaneously somehow comes alive from doing the same thing for 700 years and through the music of Hello Dolly. The film After Yang kind of makes the case that whatever we may call Yang, whatever the limits of his technology may be, with enough time, with enough caring, with enough time spent with other caring people, anything could be possible.

Probably one of my favourite flicks of the year thus far.

--
“There is no something without nothing” - After Yang