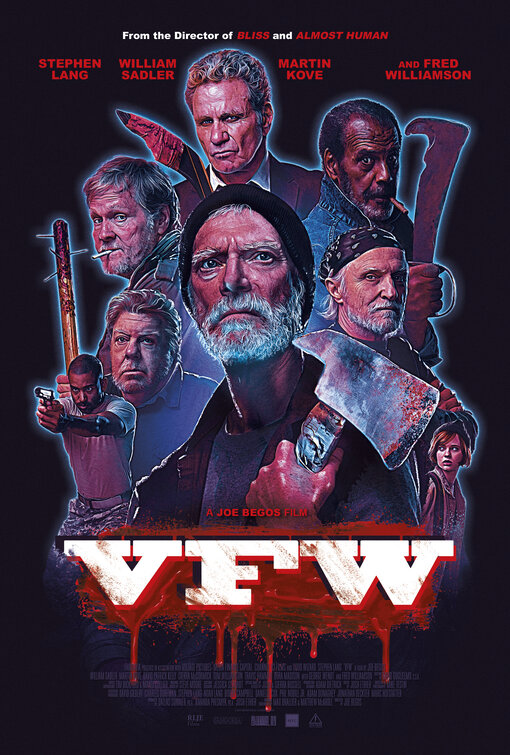 Damn, I guess I felt like watching some 80s trash, and I found the perfect neon and blood-drenched delivery device, so, really, I have nothing to complain about.

Except it’s not actually violent action trash from the 80s; it’s a recent flick mimicking and set in the 80s and with the complete disregard for decency, physics, budgets and believability that typifies that era’s highs and lows.

VFW is ridiculously violent, but in a cheap-rubber-mask-filled-with-fake-blood-exploding kind of way. This looks exceedingly cheap and seedy, but that is not a negative, necessarily. Of course people in reviews and comments keep referring to John Carpenter’s legendary Assault on Precinct 13, not only for the heroes under siege storyline, but the exceedingly Carpenter-esque soundtrack, which is all synthesizer keyboards whenever it’s not metal guitar chords all over the place.

Our assembled heroes are, mostly, Veterans of Foreign Wars, hence the acronymic title. That would make this place where most of the heads explode the equivalent of the Returned Servicemen Leagues, or RSLs that we have here in Australia, which are places mostly old people go for cheap buffet food and booze. In our RSLs the most that happens is a little annoyance when they force you at gunpoint to sign into the guest register, if you’re not a member. Very few heads explode, though there’s probably a fair bit of food poisoning, which is no less awful than mass murder, sometimes.

But the VFW this film is concerned with, seems to be located in the worst part of some alternate history America in the 80s where a drug called hype turns users into violent lunatic zombies, and members of gangs wear lots of leather with spikes coming out of them from wacky angles. Presumably, in all realities and timelines, leather is always the textile of choice of cool people, gangs, drug dealers and their lackeys for ever more.

The main bad guy is a tiny, weedy, thoroughly unimposing nerd who wears no shirt, has no physique to justify not wearing a shirt, but had a leather vest with spikes on the shoulders. That’s so fucking tough. That’s, like, Eurovision tough.

His name is Boz (Travis Hammer). In the film’s beginning, as a bunch of the addicts of this wonderdrug carry on like pork chops, this Boz idiot taunts a female addict by throwing a vial of the drug off of a balcony, very high up from the ground below. To show how desperately addicted she is, and how thinking doesn’t factor into it, she flings herself off the balcony too. I mean, she could have just walked down the stairs, but I guess that wouldn’t have been as visually impressive as a body bursting like a water balloon thrown during a barbecue on a hot summer’s day.

That addict, though, had feelings, hopes, dreams. She had aspirations. She also had a sister called Lizard (Sierra McCormick), who vows revenge on Boz by stealing all his drugs and making off with everything he owns in the world other than his leather vest

She goes to the nearest building, which happens to be the VFW across the street.

At the VFW are a bunch of crusty old fucks lamenting the passage of time and telling the same stories for decades. For many of them, this place, and drinking with these people, is all they have left in the world. As well as cirrhosis, probably.

Fred (Stephen Lang) runs the place, and wouldn’t you know it, it’s his birthday as well. So Fred, and his only friends in this world gone wrong, drink for many hours and hours before his friends intend to take him to a strip club. Once Lizard sneaks into the place, and a horde of greatly unwashed mutant junkies try to storm the place to get her or the drugs or both, the veterans of foreign wars several decades ago have to band together once more in order to fight off the millennials / Gen Z, the youth of today / yesteryear, and prove that while they may not be the Greatest Generation, they’re definitely better than the new generation of jerks.

I’m not sure it’s really about intergenerational conflict or anything beyond the people we’re meant to like (the vets) and the bad people trying to kill them for little reason (everyone else). I’m not sure that we’re totally in the pocket for the good guy vets. There’s Fred, and then there’s his best mate Walter (William Sadler, which implies they couldn’t afford / find Gary Busey), there’s Abe (Fred Williamson, Blaxploitation legend, who seems very confused here), there’s the guy from Cheers who looks dead even before they kill him; there’s the guy who played the evil karate coach in the first Karate Kid, and there’s the legendary David Patrick Kelly whose voice, even more than forty years after The Warriors, is still a high pitched whine. He’s the one who famously screeched “Warriors, come out to play – ee – ay” while clinking a bunch of bottles together.

What I’m saying is, caring if these old bastards live or die is not a given, in fact, I can’t pretend I really cared even within the context of the story being told. On a different level, for these men, they haven’t felt like they’ve been alive since Vietnam, and fighting and killing now makes them feel alive again.

Not a…not a great message.

Fred especially throws himself into mass killing with gusto, and though the others mock him for his stern, uptight killjoy ways, he is ever their leader, as before, as now. When he rallies, when he urges them to fight, they fight. When he loses hope, they lose hope. What will become of these lovable, easily manipulated goons?

Just to keep things current, there’s somehow a young Ranger (Tom Williamson) just back from, I dunno, Panama? Granada? Nicaragua? who’s there as a very young veteran, who manages to be even better at killing junkies than the old jerks. It’s almost like there’s a passing of the torch from the elder generation to the next, of the people who will go forward with PTSD and a higher chance of negative health outcomes than Nam veterans, more of whom (from the States) died from suicide way afterwards than even did from combat.

This flick in no way mocks or criticises what these places stand for, or the people who frequent them. It’s all fervently on the side of the veterans, because, let’s face it, how else could a flick like this exist? They avoid the cliché about how when they came back, after sacrificing so much, and killing so many Vietnamese people, the people back home hated them, but it’s about the only ‘Nam cliché they avoid.

How exactly would there be much of a market for it, at least in the States, if it was anti the Vets and pro the Horde? Maybe, actually I just thought of an audience for a different version of this: just like in Spike Lee’s Da 5 Bloods, except from the perspective of the Vietnamese survivors, who now want revenge on the Vets for the war. Maybe there could even be a scene with one of them punching off a guy’s head wearing a Nixon mask for maximum reference value. Or the American vets and the Viet survivors band together to take down the real enemy: the Fucking French?

The killings are gratuitous and fake blood routinely splashes up onto the camera. They’re so over the top that I dare anyone to be offended, really. When Fred shoots a guy with a shotgun, he explodes apart into a pile of rags and corn syrup, which is what I always assumed the human body was comprised of. And when he wields an axe with the skill of a woodsman, limbs and heads fly all over the place. I guess I should not have been surprised, considering the first word that appears on the screen at the beginning of the movie is Fangoria, in gigantic letters, which, I’ll be honest, I didn’t know still existed. It was a magazine dedicated to horror movies ages ago, but apparently still exists, especially if they’re putting cash into flicks like this. It’s a circular and perfect argument: a horror magazine that gets horror films made so it can review and promote those horror films. Everybody’s happy! Except for the hundreds of junkies who died, though.

Let’s be honest, it’s not that much cash that they fronted for this flick. I have gone on drunken benders in the past, the long ago, where I probably spent more at 3am than what was budgeted here. It looks cheap but I think it was intended to look cheap and nasty. Goes with the aesthetic. Goes with the grungy fear of the great unwashed young people that seems to infest the minds of the superannuated anyway, though thankfully, despite the fact that it was made in Texas, there’s no racial overtones (unlike that apparently appalling recent Rambo movie where Stallone kills the enemy Trump warned everyone about). They’re just mostly generic white extras being killed by mostly white actors, and that’s okay, if you’re up for it.

I was up for it, but I’m not going to pretend this is Shakespeare or anything of that deep significance. It has all the shallow retro appeal of Stranger Things, with more honesty about its intentions and less smugness about its many references, all for the purposes of ugliness and evil. Of course the good guys will win in the end, unlike Vietnam, but they’re still not going to get a parade.

--
“Right about now, I'm feeling real eager. So whatever you're gonna do, quit flapping your gums and do it. But when you come, boy, you come sharp. Because you make a mistake, I'm gonna cut your heart out.” – I was wrong, that is Shakespeare - VFW