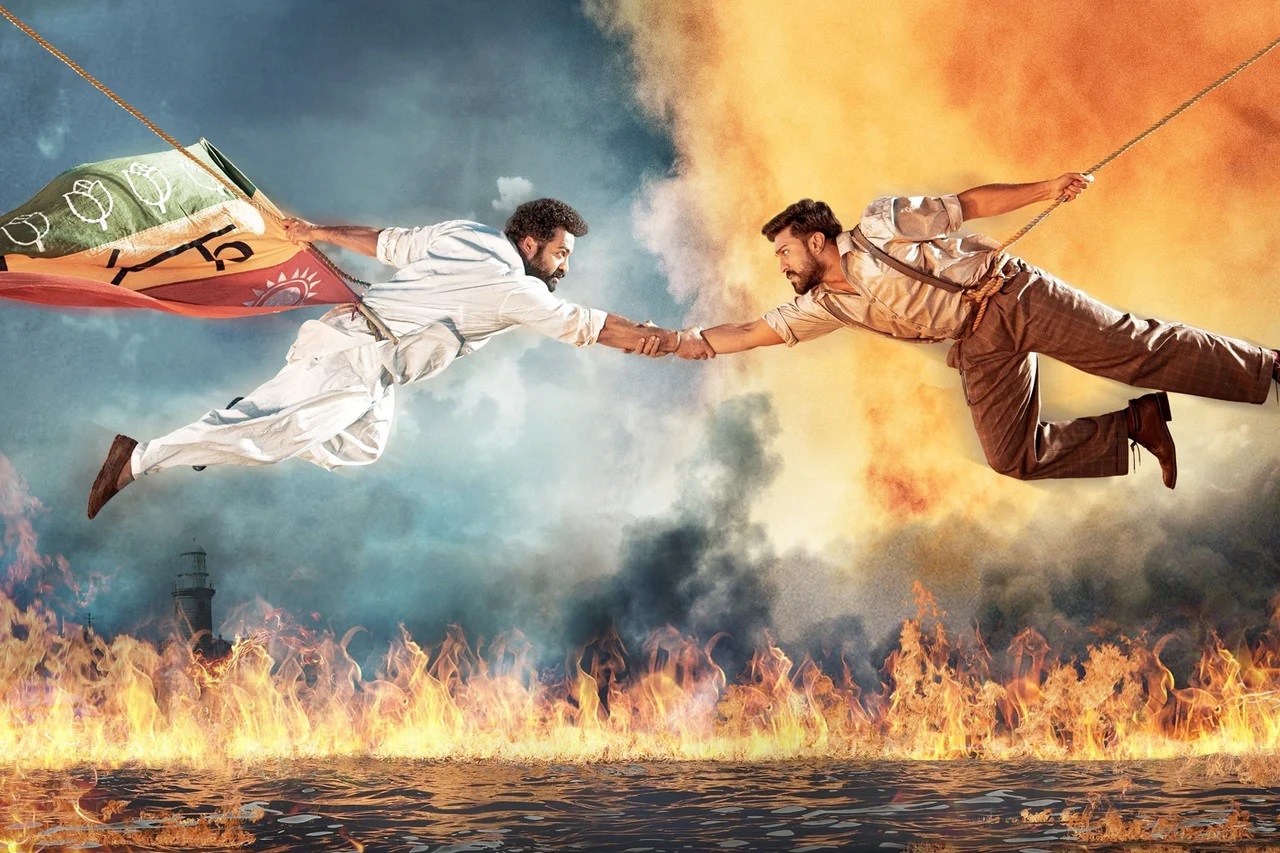 No, this isn’t a movie about how great the greatest radio station in the world, being 3RRR, is and has been for decades. Instead this is an Indian blockbuster in the Telugu language about how two guys 100 years ago beat up all the British Raj and forced them to leave India.

It’s totally insane, and it goes for over three delightful hours!

I’m not going to pretend that I watched this in a cinema – this was very much a case where Netflix was my friend and not the perpetual enemy to making choices that it usually is.

This film… You have to be in a particular mood, I guess, to watch this and enjoy its over-the-top over the topness. What whole sections capture here is the energy and insanity of the Hong Kong flicks I used to go and watch in Chinatown cinemas way back in the day, except somehow dialed up to a hitherto undiscovered number above “11” on the amplifier.

In no way should this movie be confused with either actual Earth history or Indian history. But it’s very much an anti-colonialist action epic, and I totally support anything anti-colonial, because honestly, empires are evil.

A newly appointed governor (Ray Stevenson) cruises through some bit of India like he owns the place. His harpy wife sees a small girl child she likes, and basically takes her from her people. This small, appalling selfish act leads to 3 hours of people doing a whole heap of stuff in order to either get this girl back or stop people from getting this girl called Malli back.

She is from a tribe called the Gond, simple folk in tune with the earth and with animals and plants and all that bullshit, and the Gond ask their protector, their shepherd Bheem (N.T Rao Ram Jnr) to go get her back.

What are Bheem’s qualifications for the job? Well, he’s a big burly motherfucker who can pretty much wrestle tigers when he has to.

The imperial awful Brits catch wind of this fearsome man pursuing the governor’s plaything, so they collectively shit themselves not being able to think of a way to catch someone they know nothing about.

But one officer, though he be Indian in the British forces, thinks he has a shot. It could be because he is the possessor of the single greatest moustache in the entire film. Such qualifications will take one far.

The Brits have arrested some freedom-fighting leader who has the temerity to want freedom for his people, so naturally the locals go bonkers and threaten some building. Police officers surround the building. When one member of the rioting mob hurls a rock and damages a window or something, some feeble British voice arks up “arrest that man”. All the other officers are trembling.

But not Officer Rama Raju (Ram Charan). Not he, of the gleaming eye, and the luxurious moustache and the ruthless demeanor. All he takes with him is a baton, which he wields with efficient brutality as he takes on, oh, I dunno, a thousand or so rioters.

And wins, of course. He gets his man, but the much hoped for promotion eludes him (because he’s Indian, duh). Which leads to his promise that he will find the mysterious, powerful but doubtless handsome man that the Gond have sent after the governor.

Raju and Bheem, sitting in a tree. Who knows what will happen between them?

Nah, it’s pretty obvious. When a train explodes and nearly falls on a child floating in a river, completely unknown to each other, Bheem and Raju join forces to save the child from death. Then begins the most inexplicable (to me) montage of all time that I’ve ever seen. It’s a musical montage, obviously, but it accelerates I guess the courtship between the two men, kinda jumping ahead to say “hey, these guys who were complete strangers seconds ago are now best of friends and indeed brothers because it’s destiny”. I mean, that’s literally in the lyrics, but it’s kinda baffling. Nothing feels organic about any of that, and it’s almost kinda comical. They are best friends, soul mates, but they know nothing about each other, not even each other’s actual names or backstories, and little do they realise they’re the antagonist that each of them is after, or trying to avoid.

As he keeps searching for Bheem, not knowing Bheem is right in front of him, Raju also helps out his country bumpkin friend, especially in the dating department. For whatever reason Bheem, despite looking like the guy who angrily throws your kebab at you at 2am when you’ve staggered in from a pub or a club famished and much the worse for wear, has caught the eye of a British girl Jenny (Olivia Morris).

Also, he speaks no English, and she speaks no Telugu, so romance’s path is not an easy one. When she tries to explain what her name is to him, she’s says “don’t call me Madam, it’s just Jenny”, but what he thinks he has to memorise is “Dontcallmemadam Itsjustjenny” as her full name.

Hilarity ensues. Jenny’s sole purpose in the film is to give intel to Bheem, to look disapprovingly at other Brits who act openly racist towards Bheem or any other Indian character, and to openly be in awe of everything these main characters do.

Of course, with such an abundance of action, you’d think the explosions and the throwing of tigers at people’s heads would be the main attraction, but at a party Bheem is invited to, there is another form of combat put forward.

They dance, they kick up their heels in the most high energy dance off you’ve seen with racial undertones since either version of West Side Story. The incredibly over the top dance sequence is amazing on all sorts of levels, especially on the level which the pasty, feeble British men are made to look like dickless callow boys, especially as the virile Indian hot-steppers have all the British women ooing and aahing over their every move.

Is it getting hot in here, or am I just being overwhelmed by all the raw sexiness on display?

But wait, isn’t this about getting the kidnapped girl back and killing the British? There’s plenty of time for that later. We have so much backstory to fill.

There is an inevitability where Bheem has to still try to rescue the child, and Raju, when he realises who he is, has to stop him, but there is acres and acres of film to go still, after each betrayal, each redemption, each apology, until the glorious triumphant end.

This is very much the cinema of speeding things up, then slowing them down, then speeding them up again, over and over again. If the action scenes have a virtue it’s that they’re not overedited – the director and editor want you to see every heroic thing these two gods who walk amongst men do, in all its detail.

Perhaps, even too much detail. There are sequences that I find baffling, none so more as the one where they decide to recreate the scourging scene from Passion of the Christ. Bheem is captured, and the British want to make him pay, so Raju has two jobs – to whip Bheem until his blood flows into the ground, and to make him kneel.

You whip, and you lash, and the guy refuses to bend the knee to the British, as he sings his patriotic song about forest, rocks and rivers, probably. So what’s a guy to do? The somehow even more evil wife of the governor throws an even more evil whip to Raju, so he can really give Bheem the business. That whip is insane, and hopefully entirely CGI. It is so insane that even a drunken Mel Gibson would look at the whip and say “that whip is fucking insane” before probably muttering something racist or anti-Semitic or both and then passing out.

Rivers of blood. It’s crazy. For such an overtly hyper-nationalistic Hindu flick, the bizarre use of Christian iconography (after all this insane whipping, Bheem is raised up into the air with ropes, such that he looks crucified, I swear I’m not making this up) is just chef’s kiss perfect. In that no, I thought it was pretty dumb, but what do I know.

There is still so much more film to go. Raju’s backstory is exhaustively explained, such that we realise his motivation is the opposite of what it seemed, so that we’re not confused when he decides to put his career to the side and save his friend, and do what he was really put on this earth to do, which is kill Brits.

Fortunes reverse, bonds are reinforced, and the ending has Raju transform into a literal god as he and Bheem finally choose, in an action sequence that builds so much that I thought my screen was going to implode, into an ejaculatory explosion that kills pretty much every British person in Indian, except for the good hearted Jenny, of course.

And then there’s a musical song and dance sequence that rams home that what you’ve been watching is the story of how great Indian (but only Hindu Indian) men are, and how they’re all iron men, and that even though this is set in the 1920s, and it would be decades before independence, it’s men like Raju and Bheem who made it happen, not feeble panty-waists like Mahatma Gandhi or Jawaharlal Nehru. No, fuck them and their pacifist ways. Real men make change by killing other men.

It’s exhausting, but it was, for me, very enjoyable. Both of the main actors have charisma in truckloads, especially, for my money, the guy with the moustache playing Raju. He may have a bit of a limited range, but he had such a smoldering, seething fury within him that it was generally a delight to watch him brutally dispatch British soldiers, who, let’s face it, were asking for it.

The political stuff, the Hindu-supremacy stuff is far more disturbing but I don’t have the capacity to litigate that stuff now. I watched it for the action, the dance scenes which are no less explosive than the shooty-shooty bang bang scenes, and the awesome vision of an India free of colonialism, something all of us should dream of.

Just, you know, as long as it’s not replaced with something even worse.

Rise Roar Revolt sounds like good advice to me.

8 times I thought an action sequence couldn’t be topped, and then realised there was like 2 and a half more hours to go out of 10

--
“Your friendship is more valuable than this life, brother. I'll die with pride.” - RRR