Kubo and the Two Strings 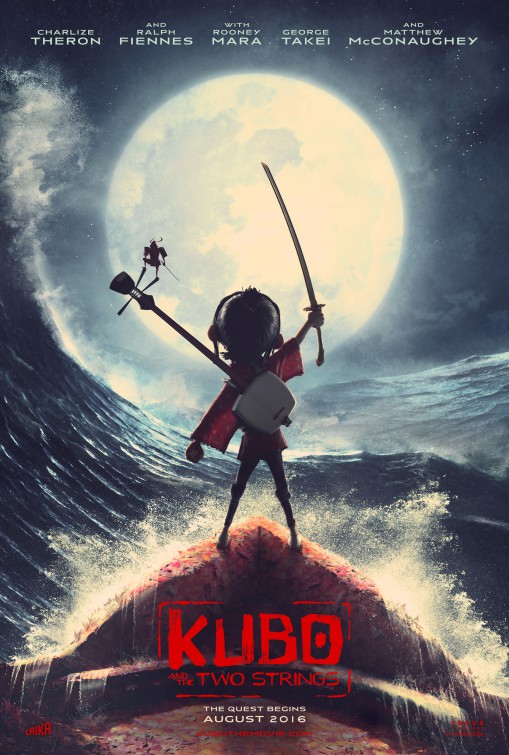 He's got a sword, and he's going to stab the moon with it

I wanted to love this, I really did. I love most of the stuff that the animators at Laika Entertainment have come up with thus far. They’re idiosyncratic as purveyors of animation, getting the distinctive look you’re not going to confuse with any of the other studios that comes from still using a lot of stop-motion (physical) animation in their movies.

It’s certainly the brightest and best looking of their works, shiniest and cleanest, compared to Coraline, The Boxtrolls and ParaNorman, which all looked somewhat gothic (in Coraline’s case) or a bit gangrenous. They were shooting for a mass audience, and they didn’t get it, which is a bit of a shame.

It’s ambitious, too. It opens with a woman in a boat trying to get somewhere in a terrible storm, one which wrecks her little boat and wounds her terribly, but even worse she is not alone. A baby boy is with her, and they crawl together into a cave to die.

It’s a very idyllic cave, beautiful ocean views, though probably a bit drafty. Some time passes, and the baby becomes a boy, and what a boy. He looks after his damaged mother, who sits motionless all day, and raises money for some rice by telling stories at a nearby village.

The boy, Kubo (Art Parkinson) is an accomplished storyteller, and can even, somehow, animate origami figures as he plays a shamisen to accompany his narratives. He is told, before he leaves for the village, to be back before nightfall, lest his evil grandfather come after him and steal his remaining eye.

Yes, even if the animation isn’t that macabre, the story’s still going to go that way, because, after all, this is Laika, and they made an animated kids movie about a boy (in ParaNorman) who could talk to the dead and who’s main antagonist was the vengeful spirit of a child murdered by dumb villagers.

So this one has a one-eyed boy who’s grandfather wants to steal his remaining eye.

We learn later that Kubo’s stories are really just retellings of stories his mother tells him, which generally have the same theme: There once was a great guy called Hanzo who was really, really great and did lots of cool stuff.

But then, in the middle of a retelling, his mother will lose the thread and get confused. This happens a bit. Dealing with early onset Alzheimer’s takes a tremendous toll on Kubo, especially since he’s pining after a father he’s never known, who apparently was also killed by Kubo’s grandfather.

Like, as in the object that orbits our planet, this here sad and beautiful blue world. Apparently Grandfather Moon doesn’t really have a lot of respect for humans, probably because he sees all the stuff we get up to at night, and the moment he or his other monstrous daughters find Kubo or his mum, they’re doomed. For... reasons.

A story like this isn’t going to work unless they actually track him down, so it’s not much of a surprise when two crazy scary masked harridans start trying to kill him and his mum, all because he stayed out too late one night and the moon saw him.

So, mum’s gone, which isn’t much of a loss, since she was in a coma half the time, but in her place is a monkey who sounds suspiciously like his mother, probably because they’re both voiced by Charlize Theron.

This monkey character, called, staggeringly enough, Monkey, is pretty stern and given to making statements like “You have three questions” or “don’t stab people with your mouth full”. She really does sound like an over-protective but not Jewish or Mediterranean mother “Kubo, you don’t write, you don’t call?” Anything Kubo proposes she disagrees with, but we can tell, almost sense like with our magical sixth senses, that whatever Kubo proposes, like “I must find my father’s armour, like the armour I was talking about in those stories I was telling those villager hicks, only it turns out every story I tell becomes true!!!” is where the story is going to go anyway.

Oh, and it does. It’s remarkable how that turns out. They eventually bump into a guy who sound strangely Texan despite the clearly Japanese setting, and he’s called Beetle (Matthew McConaughey). He’s charming and completely dumb, as in forgets what he’s talking about mid-sentence or supposed to be doing mid-action. But he’s adept with a sword, or even a few of them, having multiple limbs. He, too, is oddly protective of Kubo, as if he knew him or something, although he claims only to have known Kubo’s great father and fought alongside him.

Adventures ensue as they try to put together Hanzo’s full suit of armour, being a Sword of… um, Great Pointiness, a Breastplate of… Can’t-Touch-This-ness, and a Helmet of Headbutts or something very much like that. It’s a standard kind of fantasy plot, even if it is Japanese. Thing is, though, the makers decide to go in different ways when it comes to the actual ‘solution’ to Kubo’s unique problem, since it’s all about him and his storytelling ways, after all.

So, in a lot of ways I admired this more than I liked it. It looks lovely, the voice work is okay, its animation is a treat and all that, I just didn’t love it. Kubo’s powers are, since this is all about the power of storytelling rather than martial arts or magic or whatever, kind of like a Swiss Army knife, in that whatever the story needs, he can just do because… well, I’m not sure. They need a boat to cross some lake, and all Kubo has to do is strum the shamisen and a boat is created out of leaves. It’s a lovely idea, it looks great and stuff, but… when you can do something like that so effortlessly, it strikes me as weird that you can’t just invent whatever you need to blow up the moon or something similar.

The story dynamics are fine, you know, if you didn’t realise that people are often a combination of traits from their mother and father, who, like the strings on a shamisen, can provide us with the basis of a chord or a melody that is us, well, then Kubo and the Two Strings will drive that point home between your eyes until you are incapable of realising anything else. And you may need a lie-down afterwards.
I think they managed to make something recognisably Japanese that plays like a Shinto fable without succumbing to the Orientalism that sometimes come of this fan worship, which can fetishise some elements (like Japanese women) or make them seem like some Mickey Rooney-like minstrel show.

I’m not going to explain that reference. If you’ve seen Breakfast at Tiffany’s you already know. If you haven’t, then what’s the point.

Maybe I didn’t respond that well to the dreamlike plotting, which has a “whatever we think of” quality to it, and oddly mimics everything the characters say. That’s probably an unfair comment, considering how much they hammer home the same themes of circularity and parenting and how we become who we are and such.

Perhaps on a future viewing, and I think I would like to see it again, I’ll enjoy it more. My daughter loved it, but then she virtually likes every animated movie ever made, whether it’s Miyazaki or Trolls or Smurfs 2: Electric Boogaloo or whatever it was called, so she’s not a tough judge. My partner was bored by it, but then, for her, the louder and more colourful something is, the more likely it is to put her to sleep.

I think I would kinda love it if they made another Kubo story, where he goes on adventures with people who aren’t a monkey or a beetle or his parents, but with some exciting new characters, and make they could fight battles, liberate peasants and learn about themselves, and come to terms with stuff, but I doubt they’ll bother to try. They might have hoped this would be a blockbuster that started a franchise, but this wouldn’t have made its money back, at all. For some reason the same elements that resulted in three Kung Fu Panda flicks and a television series are the same elements that repelled audiences in droves when this came out.

On the other hand, Laika is owned by Phil Knight, the guy who started Nike and who happens to be the 25th richest man in the world, and his son Travis Knight, who also happens to be the CEO and president of Laika, directed Kubo and the Two Strings. I think if they want to make more Kubo movies, there probably isn’t anyone, not even the disinterest of millions or the tweets of a megalomaniac, that could stop them.

--
"These are the memories of those we've have loved and lost. And if we hold their stories, deep in our hearts... then you will never take them away from us". – Kubo and the Two Strings